Or a subterranean lesson in Uzbekistan's turbulent 20th-century history 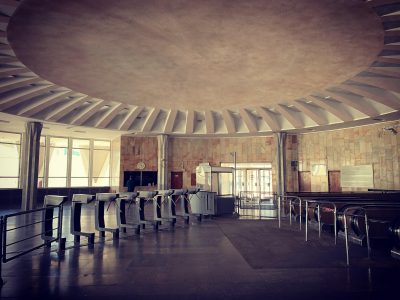 For many years, it was strictly prohibited to photograph the ornate stations of the Tashkent metro in the Uzbek capital. The Soviet-era system had also been constructed with nuclear attack in mind, and could serve as a fallout shelter in wartime. But ever since that ban was lifted in early 2018, visitors from abroad have started to show heightened interest in Central Asia's oldest subway system. And with good reason.

Tashkent's metro system is so much more than just a means of transportation. Over the decades of its existence, the design and names of the metro's 29 ornate stations have changed to reflect the turbulent trends of Uzbekistan's history. In short, a ride on the Tashkent metro tells the story of a country where nation building is still very much in process.

Palaces of the people

That story begins in the early days of Soviet socialism.

Vladimir Lenin once famously said that “communism is Soviet power plus the electrification of the whole country” (Коммунизм — это есть советская власть плюс электрификация всей страны). Back in November 1920, electricity was a taste of the bold promises of progress to come; it embodied the new innovations now made accessible to the masses. Just 12 years later, the Soviet leadership pronounced yet another strategic and futuristic priority: the construction of the metropolitan, as Europe's subway systems had come to be known in the second half of the 19th century. On May 25, 1932, the Sovnarkom, the then executive body of the Soviet government issued a decree:

“The construction of the metropolitan must be considered a project of the utmost importance to the state, with its provision of timber, metal, cement, transportation, etc, and as a key priority in matters of superproductivity at the national level.”

In other words, no efforts would be spared to demonstrate the success and superiority of Soviet technology. The first metro pit was excavated in Moscow in the 1930s, and the first line officially opened in May 1935. Those events can be revisited in the 1935 documentary film “There's a Subway” (Есть Метро) which covers the entire construction process between 1931 and 1935:

The development of the metro also marked a key turning point in the development of the Soviet economy: while the first five-year plan (1928–1932) emphasised heavy industrialisation, the second five-year plan focused on urbanisation. As a result, the metro became a major cultural symbol, present in films, children's books, poetry and songs. It was hailed as testament to the success of Stalinism in official songs, such as this one from 1936:

We believed, we knew, That by digging a pit,
We would, Comrade Stalin, Make your plan come true.

They will describe it for centuries on, And not with just one pen
And they will tell the children, How they fought for the metro!

However, in later decades the metro also made its way into marginal or dissident culture, as shown in this 1969 song by Bulat Okudzhava:

Inspired by the success of the Moscow metro, in later years the Soviet government then announced it would build a metro in every Soviet city with over one million inhabitants. That ambitious plan eventually slowed down, but by the time of the Soviet Union's collapse in 1991, it had constructed metro systems in 13 cities, including Leningrad (1955), Kyiv (1960), Tbilisi (1966), and, of course, Tashkent (1977).

Tashkent gets its metro

The people of Tashkent had to wait several decades for their metro, which was the first in remote and comparatively underdeveloped Soviet Central Asia. Planners faced several challenges: the Uzbek capital had experienced a crushing earthquake in 1966, which destroyed half the city. The city lacked trained engineers and metro workers. Uzbekistan's long and scorching summers posed problems for ventilation. Which was precisely why the Soviet authorities had to demonstrate that they were up to the task.

Mobilising human resources and special construction material from all across the Soviet Union, the first metro pits in Tashkent were dug in 1973. Just four years later, in a Stakhanovite spirit which set a record, the metro's first line was opened in November 1977. The date was chosen to coincide with the 60th anniversary of the Russian revolution. Accordingly, as news footage from that day shows, all local politicians were present at the opening, where a message of congratulations from Soviet leader Leonid Brezhnev was read out before the crowd.

In subsequent years, new stations were added to the system. By 1984, a second line had been opened. As this 2007 documentary shows, particular attention was paid to the design of the stations:

As in other Soviet metro systems, each station of the Tashkent metro was assigned a particular political and cultural message to illustrate key messages of Soviet ideology. When Uzbekistan gained independence in 1991, its new government followed the example of other young states and renamed streets, squares, and metro stations to distance itself from certain elements of the the Soviet past. In doing so, they reaffirmed long obliterated and sometimes censored symbols of Uzbekistan's pre-Soviet past. Of the 23 stations constructed during the Soviet period, 11 have been given new names. For example, Lenin Square station is now typically called Mustaqillik maydoni, or Independance Square, in Uzbek. 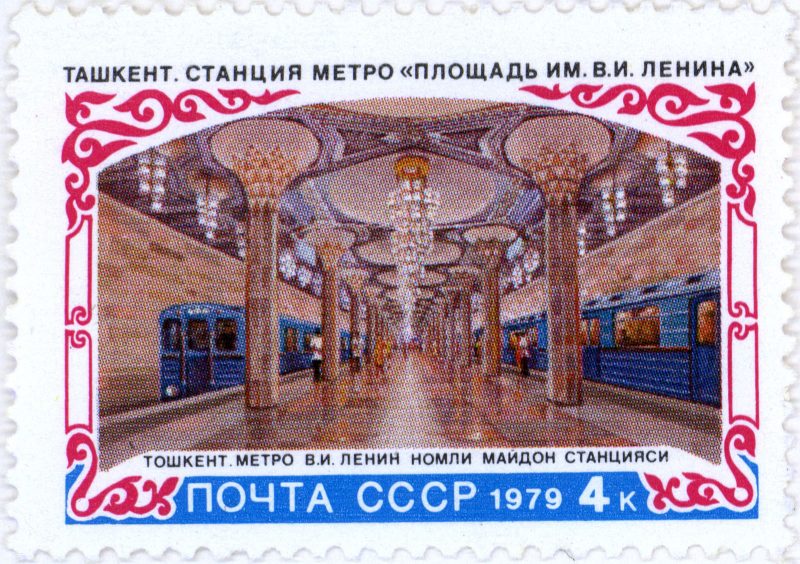 Soviet postage stamp from 1979 depicting Tashkent's Lenin Square metro station, as it was called at the time. Photo from Wikipedia Commons, copyright waived.

Of the 29 stations operating today (a third line was opened in 2001), five metro stations are particularly revealing in what they tell us about Uzbekistan's changing narratives around national identity: 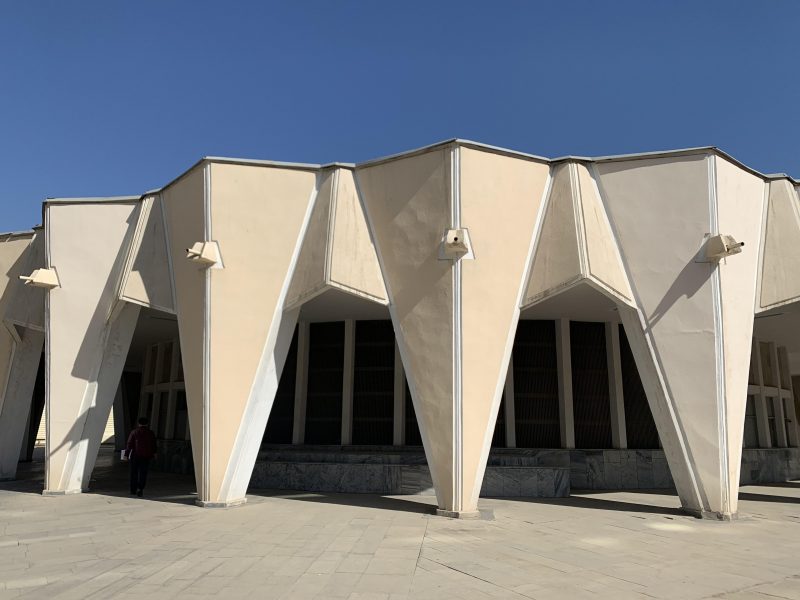 Xalqlar Do'stigli (Friendship of the Peoples): This station is an emblematic example. Known as Friendship of the Peoples during the Soviet period, its previous name reflected Soviet ideology's extensive attempts to emphasise its supposedly peaceful international role during the Cold War, in opposition to western imperialism. The station's overground building conveys this message of futurism. In 2008, Uzbekistan's then President Islam Karimov, who kept a rather independent line from Moscow, renamed the station Bunyodkor (“The Founder”), in honour of his own role as founding father of the new Uzbek nation. However, in 2018, Uzbekistan's second president Shavkat Mirziyoyev, who is keen on closer ties with Russia, restored the station's previous name. 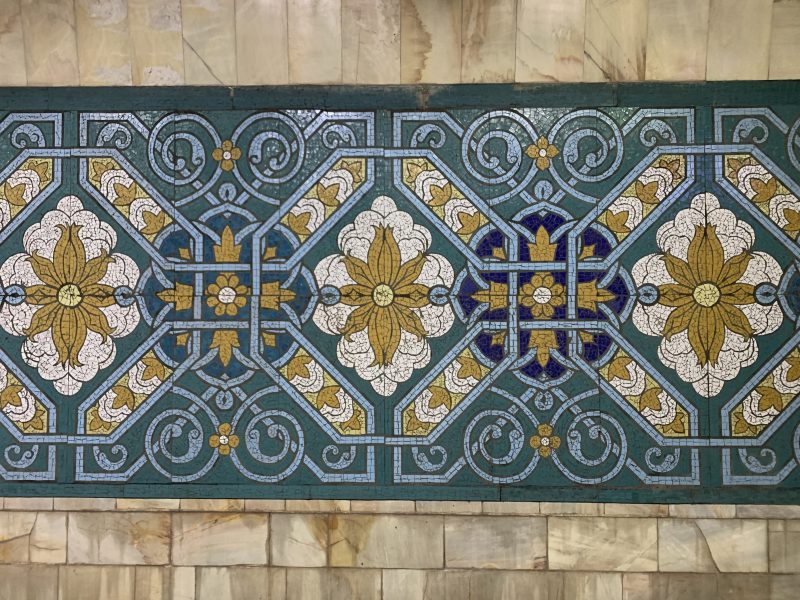 Paxtakor (The Cotton Grower). This station's name symbolises the Uzbek economy's everlasting dependency on cotton production. During the Soviet period, Moscow assigned each of the 15 Soviet republics a particular crop to produce en masse. This focus on cotton monoculture has been continued by all subsequent Uzbek governments at a high price for the country's population. The cotton sector has used forced labor, including that of children. Irrigation for the vast cotton fields has brought ecological disaster on the country with the shrinking of the Aral Sea. Today Uzbekistan is the world's eighth largest cotton producer. 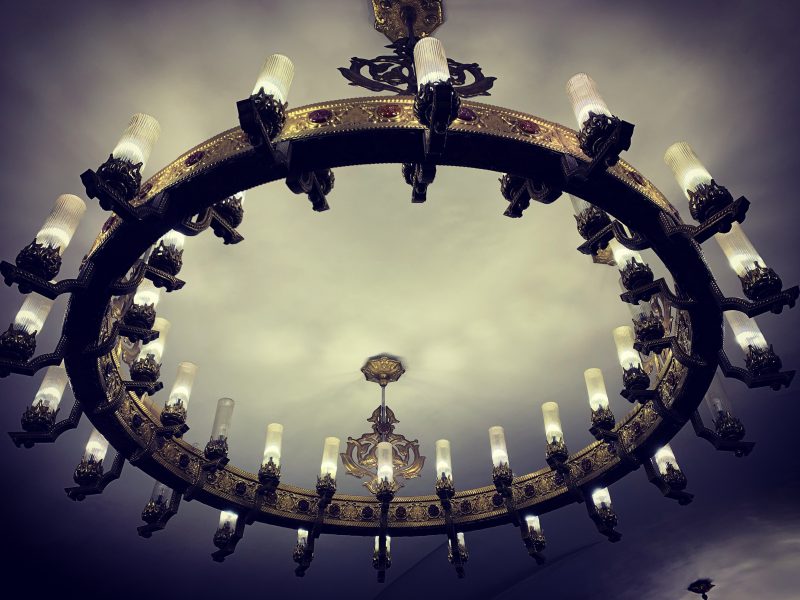 Chilonzor. This station was named after the nearby district of Chilonzor, whose massive residential complexes were developed along the lines of Soviet urbanisation. Chilonzor is one of the most imposing in terms of art: its walls are covered in white marble, while several panels of 3D ceramics, all made by leading sculptors, illustrate the Soviet vision of Uzbek life: a mix of rural traditions and urban achievements, all enhanced by a series of massive crown-shaped chandeliers reminiscent of the Moscow metro.

Here is one “Uzbek scene,” depicting men drinking tea on a tapchan, a wooden platform that helps to isolate from the scorching heat: 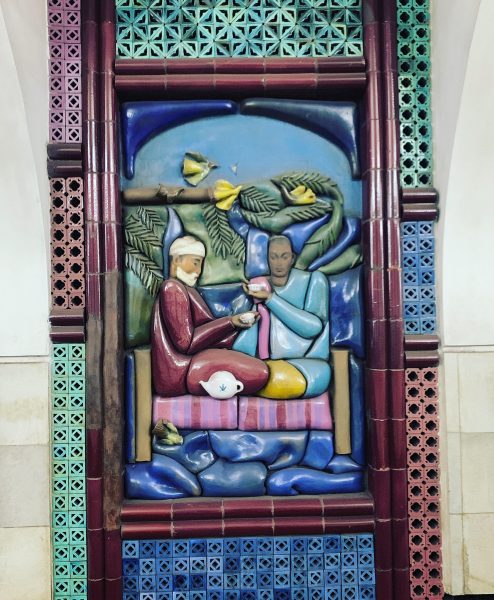 Alisher Navoi. This station was named after the 15th century poet and linguist Alisher Navoi, whom several states in Central Asia claim as their own. Navoi was born on the territory of modern Afghanistan, and wrote in Persian, Arabic, and Chagatai, the ancestor of the modern Uzbek language. 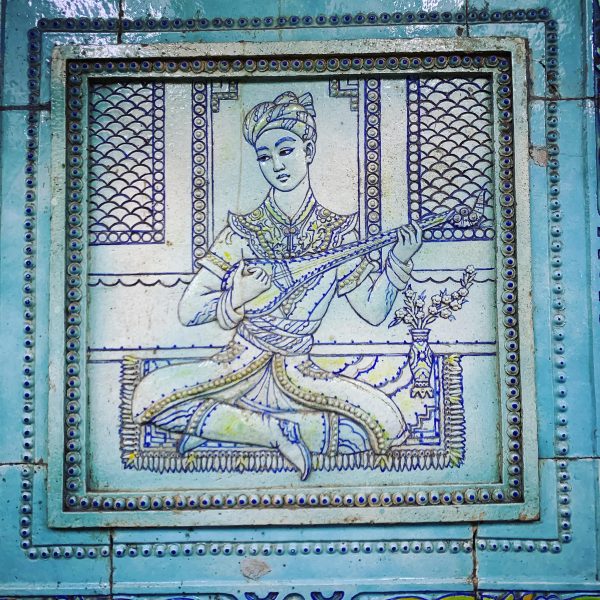 Kosmonavtlar (The Cosmonauts). In the Kremlin's narrative the cosmonauts, the Soviet Union's spacemen, were the apex of Soviet science and progress. This station is decorated in cosmic blue with portraits of Uzbek medieval astrologists and Soviet cosmonauts. 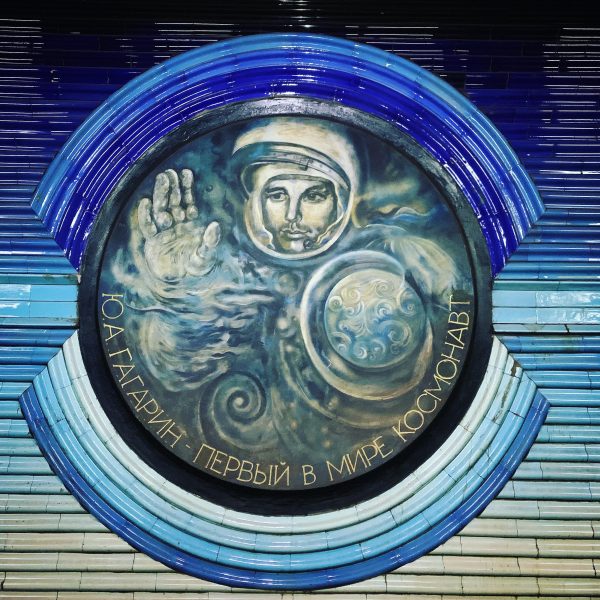 Kosmonovtlar metro station with a portrait of Yuri Gagarin, the first man into space. Photo by Filip Noubel, used with permission.

From Soviet to post-Soviet, from socialist to Islamic, Tashkent's metro celebrates and commemorates Uzbekistan's remarkable history. Its stations have become an integral part of any visit to the Uzbek capital, perhaps signalling that tourism will be the next chapter in Uzbekistan's long nation building narrative.