Who has ruined Christmas peace and joy in Hong Kong?

Rally planned on the first day of 2020 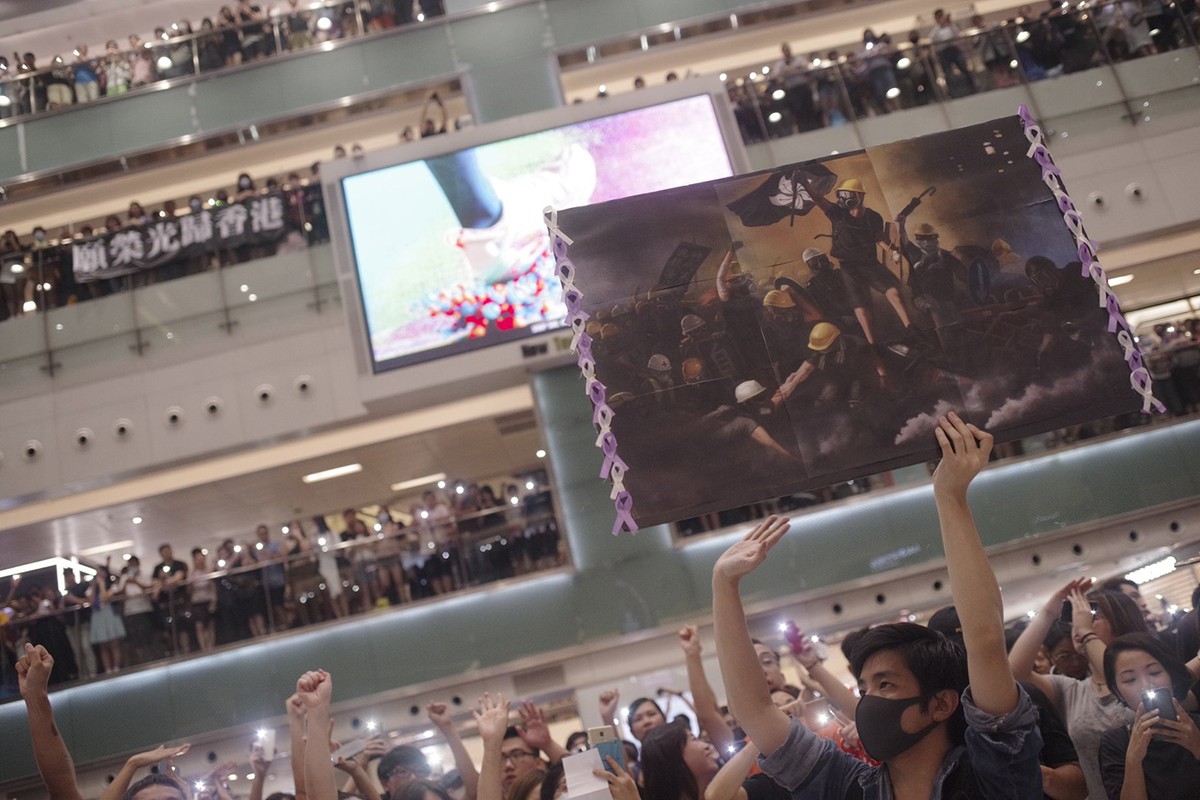 “Be water shopping” in a shopping mall in Shatin district. By 朝雲. Photo used under content partnership agreement with Stand News.

Hong Kong’s Christmas was neither peaceful nor joyful as riot police charged major shopping districts with anti-riot weapons to disperse flash mob protests. By December 28, a total of 336 people were arrested.

Thanks to the police, Hong Kong has its own version of ‘white Christmas':

Guess what? We have a white Christmas Eve in #HK. Tear gas in Tst, right in front of a hotel. I hope Police won’t make this Christmas Eve a bloody one. #PoliceBrutality pic.twitter.com/Sx9gfKaSAH

‘Be water shopping’ and collateral damage

Ahead of Christmas, protesters called for a series of flash mob actions called “Shop with you” or “be water shopping” (和理 shop) on various social media platforms. Similar actions had taken place a few times in previous holidays like Halloween in the past few months.

“Be water shopping” means roaming around in shopping malls and shopping districts, singing protest songs and chanting slogans. Some protesters believe that it is a relatively safe protest strategy – if riot police entered shopping malls, it would result in collateral damage of the holiday shopping businesses, and they also believe that the economic harm would press the government and the pro-establishment to support the independent investigation of police brutality in the violent dispersal of protests since June 2019.

Majority of the ‘shoppers’ were peaceful but in a number of districts, a few pro-Beijing shops windows were smashed by some masked individuals. Instead of targeting the violent protesters, the police deployed riot control weapons including tear gas, pepper spray, rubber bullets, water cannon and batons against the peaceful flash mobs:

Who has ruined Christmas?

Some members of Hong Kong Watch, a human rights group based in the United Kingdom, witnessed the clashes between the police and protesters in a number of shopping districts during Christmas Eve. The group issued a statement condemning the brutality of the Hong Kong police:

Widespread reports of beatings, firing rubber bullets at people’s heads and faces (in clear breach of international norms), indiscriminate use of teargas and water cannon against largely peaceful crowds celebrating Christmas in Tsim Sha Tsui and other areas represent yet another example of the escalating human rights crisis in Hong Kong.

However, who looked more like thugs? Writer Richard Scotford posted photos of plain clothes police in one of the shopping malls:

Here’re the black gangs that have ruined everyone’s Christmas. pic.twitter.com/AmZPNKbXFJ

And many netizens compared the unidentified masked plain clothes police to terrorists:

I can't find the different pic.twitter.com/AyMr7DP8gn

No independent investigation of police brutality

Earlier in December, the international panel of experts hired by the Hong Kong government to advise the police watchdog over its handling of complaints against abusive police officers had quit their jobs as they argued that the current mechanism was not equipped to carry out a proper investigation.

On Christmas eve, Washington Post published an investigative report quoting experts who had reviewed Hong Kong police’s official guidelines and training manuals and concluded that the city’s police force has been ignoring its own protocols aside from misusing chemical agents and deploying excessive force against peaceful protesters.

Since June 2019, more than 6,300 protesters had been arrested but thus far not a single police officer has been punished for excessive use of violence that led to severe injuries of activists, journalists and first aiders.

Reports about arbitrary arrests by the police and torture while under police custody have been appearing in the past few months. In addition, rumors kept circulating online that some frontline protesters were beaten to death and staged as suicides by the police. Between June to September, there were 256 cases of suicides and 2,537 cases of deaths outside hospitals. These figures are more than 15 and 14 percent higher than in the same period in 2018.

While the government authorities kept debunking the accusation as rumors, its refusal to carry out an independent investigation on police brutality has undermined its credibility. The government also kept issuing political advertisements urging peaceful pro-democracy citizens to denounce the so-called protesters’ disruptive and violent acts. Yet such call has lost its moral ground as there is no independent investigation into the abuse of power by the police.

Meanwhile, the violent crackdown on protests has affected the local economy. The number of tourists in Hong Kong has decreased by 53 percent during the Christmas season.

It is unlikely that Hong Kong will be back to normal in 2020 if the government continues to ignore the five major demands of the protesters. The Civic Human Rights Coalition has prepared for it annual rally on the first day of 2020 and its only agenda is to reiterate the protest demands: withdrawal of anti-extradition bill (already withdrawn on 23 of October), remove the riot label against the protesters, independent investigation of police brutality, amnesty for the arrested protesters, and universal suffrage:

We will hold a rally on 1 January 2020, with the theme “Remember Our Promises, We Stand As One”. Letter of No Objection pending. #StandwithHK #WeStandAsOne #FiveDemandsNotOneLess #HKProtest pic.twitter.com/3E5Ipt1HD4