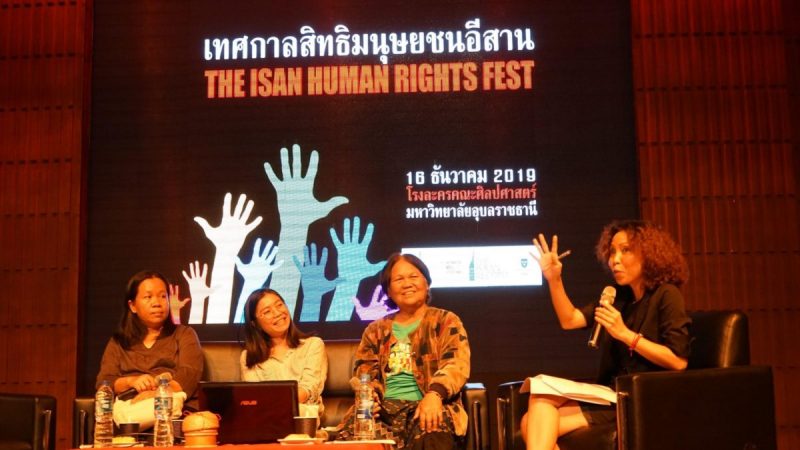 The Isaan Human Rights Festival is an annual event in its tenth year that opens space for discussion and exchange between marginalized Isaan communities, human rights defenders, and foreign diplomats. Photo and caption from The Isaan Record

This edited article is from The Isaan Record, an independent news site in Thailand, and is republished on Global Voices as part of a content-sharing agreement. Additional reporting by Christopher Burdett and Hathairat Phaholtap. Photography by Adithep Chanthet.

Over 300 people gathered at Ubon Ratchathani University on 16 December 2019 to discuss the state of human rights in the northeast region of Thailand.

The 10th Annual Isaan Human Rights Festival gathered communities from across the region, activists, scholars, students, and foreign diplomats. The ambassador of Sweden, Staffan Herrström, joined the event to talk about the international perspective on human rights in a special session.

Hosted by the Faculty of Liberal Arts at Ubon Ratchathani University and co-organized by The Isaan Record, the event opened a rare space for Isaan communities affected by development projects and government policy to voice their grievances. It also highlighted the work of local human rights defenders providing them with a stage to talk about the challenges they face.

We usually only hear stories from a Bangkok perspective. The heroes who are talked about are Bangkok’s heroes. I feel that we are in the midst of reclaiming our own narrative with this event.

Conversing mostly in Isaan-Lao, speakers painted a grim image of human rights in the northeast while expressing little hope for the situation to improve under the current mixed military-civilian government.

Duangthip Karnrit from Thai Lawyers for Human Rights (TLHR), an advocacy group, noticed that since the military coup in 2014, a significant number of people in the northeast have been stripped of their rights to freedom of speech, association, and public assembly.

After the coup, the junta made heavy use of two mechanisms: the order that prohibited political assemblies of more than five people, and the [2015] Public Assembly Act. More than 100 people became political refugees while 2,408 civilians [across the country] had to stand trial in military courts.

The military junta, the National Council for Peace and Order (NCPO), seized power from a democratically elected government in May of 2014. After a controversial election in March this year, the NCPO-backed political party, the Palang Pracharat Party, was able to cobble together a pro-military coalition government that placed the head of the NCPO, Gen. Prayut Chan-o-cha, to assume the premiership. The NCPO was officially dissolved in July, but the military continues to exert its power.

Other speakers at the event blamed policies passed and implemented under the NCPO without any meaningful participation of the public for rising tensions and social conflict in the region.

We’ve been on this land for generations. I can’t help but feel that there is nowhere to live in Thailand for us poor people. The judicial system is useless. Why are they selectively applying the law only to us poor people? Why can’t they apply these standards to people in the cities? People are left to fight against the entire state with their meagre resources, but receive no assistance at all. It’s not fair.

Across the region, several forest communities are resisting eviction from land that they claim they have lived on before it was announced a protected forest area. Since 2014, when the NCPO started enforcing the policy, until September last year, more than 28,000 cases of forest encroachment were recorded, covering a total area of almost 820,000 rai (131,200 hectares).

But the bleak human rights situation has not only been the work of the military government in the past five years, as some speakers argued.

Arunee Santhitiwanich, a lecturer at the Faculty of Political Science at Ubon Ratchathani University, argued that the Thai state is not only perpetuating inequalities that already exist in society but also discourages genuine public participation.

Whenever there is a conflict, a favourite tactic of the state is to set up a committee, because it buys them time. By appointing officials who will inevitably be transferred before the issue is resolved, they drag out the whole process. This gives people false hope that their issues are being addressed.

At the same time, public hearings mandatory for development projects hardly ever have any real villagers participating because regulations say that only legally registered members of civil society are allowed to attend, Arunee said.

In three moderated discussions, members of the audience shared diverse views on how to address Thailand’s human rights challenges. Some expressed feeling like “invisible citizens” without any rights while others told of a prevailing sense among the youth of wanting to leave their country.

June, a female student from the Faculty of Liberal Arts, said:

The current political situation suppresses our rights and freedoms. When I look at my friends on social media, many of them want to leave their country because they don’t see opportunities and have no hope. And then of course there are also the economic problems.

A retired teacher from Khong Chiam district said that many of his former students ended up driving taxis in Bangkok because there are few opportunities for them to make a living in their home province. He urged the youth not to fall into political apathy but to collectively push for social change.

If we poor people don’t stand up for our rights, we will remain dust under other people’s feet.

Sompong Viengchan, a long-time activist opposing the Pak Mun Dam in Ubon Ratchathani who was summoned by the military after the coup, echoed this view.

If we see someone stealing our buffaloes, are we just going to stand there and let them do it? No! We have to make a stand, make a fuss, and make some noise. We need to shame the government, or make them feel the shame that they should be feeling for using violence and intimidation against villagers who are just trying to preserve their livelihoods.

In a special session in the afternoon, Swedish ambassador Staffan Herrström stressed the importance of freedom of expression and public participation as a fundamental element of democracy. He also spoke of the positive experience with decentralization of power that helped turn Sweden from a “poor, unequal, undemocratic country in the 19th century” to what it is today.

Herrström praised the courage of human rights defenders in countries like Tanzania, Poland, Vietnam, Myanmar, and Lao PDR. But he also expressed concerns about the increasing number of governments acting in authoritarian ways to silence critics and violate human rights.