New documentary charts the RuNet's unlikely rise — and its fall 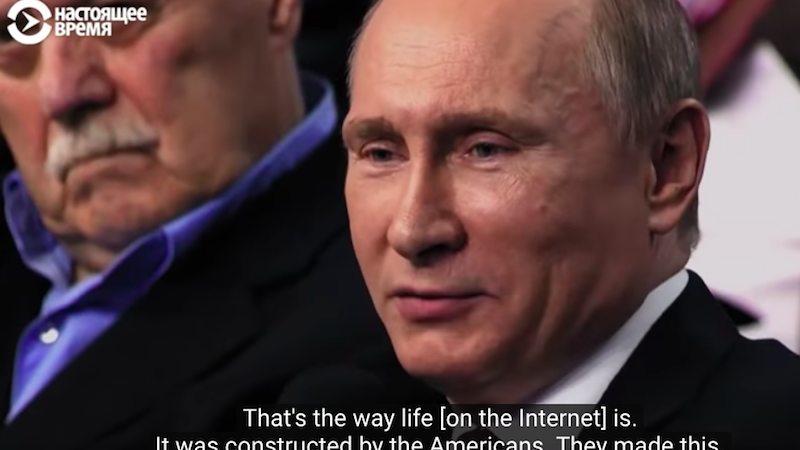 Just over 25 years ago, the .ru domain name was created, and with it the RuNet was born. Russian journalist Andrey Loshak has marked the anniversary by releasing “Holivar” (known in English as “Holy War” or “InterNyet”), a seven-part documentary on the evolution of the Russian internet. Featuring interviews with entrepreneurs behind iconic Russian digital brands like VKontakte, Yandex, and Mail.ru, the series charts the RuNet’s rise from a niche 1990s subculture to the ubiquitous part of Russian society, culture, and politics it has become today.

The first episode in the series premiered on June 9, 2019 at the Beat Film Festival, and was released publicly on the Current Time YouTube channel, owned by Radio Free Europe, on September 5. The series has received critical acclaim both in Russia and abroad, winning the Redkollegia and Professiya-Jurnalist awards:

It's like watching a film about the slow and painful death of a close friend and being unable to help him in any way.

A story of “wistful techno-utopianism”

Loshak's film simultaneously celebrates a milestone and bids farewell to the Russian internet he once knew — and he appears to have known everybody — there are very few prominent living entrepreneurs (or enemies) of the RuNet who did not appear in the documentary. Though their accounts may may seem anachronistic to viewers in Europe and North America, these figures tell a unique story of wistful techno-utopianism, which seems far removed from today's political and moral panic over data security and the unchecked influence of digital giants.

In this retelling, the RuNet was the creation of some pugnacious “disruptors” (the good guys), and its inherent internationalism and openness now under threat from the Russian state (the bad guys), who are set on nationalising it as a “splinternet.” The series opens and closes in California, starting with a hippy innovator who helped construct the Soviet internet, and ending with these same praiseworthy innovators having moved to Silicon Valley because Vladimir Putin's Russia no longer had a use for them.

Following the introduction of Russia's “Sovereign Internet” bill in November, there is an urgent need to recall the international pedigree of Russia's internet. Both detractors and supporters of the bill are keenly aware of this history, with the former emphasising the role of Anton Nossik and Russian-Israeli tech engineers who returned to Russia in the 1990s, and the latter (including Vladimir Putin) maintaining that the internet always was — and unambiguously remains — a project of western intelligence services.

Perhaps the most interesting lesson from Loshak's documentary is that, despite its international origins, the RuNet has long been “sovereign” — just not in the way that the authorities might prefer.

Today, it seems remarkable just how little Putin and the Russian elite appeared to care about the internet in its early days. In one memorable anecdote, the late Anton Nossik and investor Egor Shuppe recall then prime minister Putin's 1999 meeting with key representatives of the “online community.” Shuppe recalls that “our hidden agenda was to explain to him that we were kids who had no power, so should be left alone… and the weirdest thing was that Putin gave us his word and kept it for 15 years.”

Similarly, In 2001, when the first online web conference was held with Putin's participation, journalist Marina Litvinovich recalls having to explain to the president what the internet was. Putin reportedly told her that he did not need the internet, as he had many other sources of information — an attitude which, by some accounts, persists to this day:

Well, I thought that he's a secret services agent, a KGB guy, so I told him that it's a big database, with which you can find anything you need, and showed him some sites. I showed him a few search engines, Yandex, Rambler, Yahoo. There wasn't a lot of time, but I remember that, on the whole, he didn't really care for the internet. I heard many times from various people that he didn't use the internet and didn't understand why he should. He's said many times since that it's just a trashcan.

Subsequently, the Kremlin did show some interest in the growing opportunities of an online presence. Following the destruction of the opposition-friendly oligarch Vladimir Gusinsky‘s Media Most holding during the early years of Putin's rule, the new president's team made their first foray into online media. Political consultant Gleb Pavlovsky, for whom Litvinovich worked at the time, helped launch early online news platforms like Strana, Vesti, and Lenta.ru, but with limited success and stiff competition from popular news aggregators, the authorities gradually lost interest in the initiative.

But necessity breeds invention: faced with a lack of investment, the RuNet's entrepreneurs created an autonomous digital ecosystem, with its own leading digital brands. As Russian investor Yury Miller points out, the RuNet's uniqueness lies in the fact that Russian tech companies still maintain significant — and sometimes, leading — positions on the market, without state interference or protectionism (unlike China).

Some of these brands, such as Miller's Mail.Ru, have even entered the London Stock Exchange — and despite the global financial crisis of a decade ago, influential businessmen like Alisher Usmanov continued to invest in the RuNet.

By the time Putin returned to the Russian presidency in 2012, the mood was very different. The impact of the Arab Spring, widely attributed to the power of social media, compelled Russia's rulers to consider the revolutionary potential of the RuNet. Once the broadcast and print media had been brought to heel, the RuNet became a space for combative, independent journalism, beyond the state's reach.

By 2012, Yandex News and Lenta.ru had become more popular than the state-owned Channel One. Something had to be done, and it was. Putin's return to power was accompanied by protests over the first restrictive legislation against the RuNet. It would be the first of many.

These years marked a new, proactive approach from the Kremlin towards digital governance. Once “Grey Cardinal” Gleb Pavlovsky, who left the presidential administration in 2011, joined the opposition, the Kremlin found a new “internet director” in Konstantin Rykov. In the documentary, Pavlovsky seems amused by the “ostentatious projects with lots of Russian flags” which emerged. These evolved so well that Rykov, who brought the style to the RuNet, was no longer needed, says Pavlovsky. “Anybody can do it now.”

And they did. The Kremlin and its supporters soon learnt the value of a state-organised “civil society”. In 2011, Alexey Malofeev, a monarchist and traditionalist oligarch, founded the League for a Safe Internet; its “CyberSquads” monitored the internet for objectionable content in the name of protecting family values and keeping children away from harmful online material. The Kremlin's increasing interest in digital governance therefore became linked to a “grassroots” conservative turn, aided by the pronouncements of outspoken, socially conservative lawmakers like Yelena Mizulina.

The seeds of the Internet Research Agency, the notorious St. Petersburg-based “troll factory” that would later flood any critical content with angry posts by employees posing as patriotic citizens, can also be seen in these initiatives.

From 2012 onwards, the interventions came thick and fast. An internet blacklist law was passed, initially to target child abuse and narcotics, but in 2013, its scope was broadened to include “advocating extremism” and “calling for illegal meetings”.

At the same time, the government exerted pressure to change the editorial leadership of Gazeta.ru, and blocked the independent news website Grani.ru. In 2014, in the run-up to Russia's annexation of Crimea, the majority of the editorial staff of Lenta.ru, including editor Galina Timchenko, staged a walkout in protest over political interference, and thereafter founded the independent media website Meduza.

Clamping down on cyberspace

With the appointment of German Klimenko as Putin's new internet advisor in late 2015, the Kremlin further tightened the screws on cyberspace. By 2016, the government had turned its attention towards Yandex. A new law on news aggregators would undermine this early RuNet giant, which was now obliged to only index stories from media sources approved by the state communications watchdog, Roskomnadzor. These restrictions culminated in the Yarovaya Law, which expanded existing counter-terrorism legislation to make further demands for data collection on Russian internet users.

Loshak's interviewees do not hesitate to stress how unprofitable these restrictions have made Russia's once vibrant digital market. Yandex, for instance, was said to be even ahead of Google in some innovations, though lamentably, investment in the RuNet has fallen back to what it was a decade ago. While some miss the RuNet of the turbulent 1990s as a space of free expression, others miss it as a space for unbridled business opportunity; in the series, the two are strongly presented as synonymous.

However, Loshak's focus on the self-declared architects of the RuNet leads him to avoid a key category of RuNet “entrepreneur” — the ordinary citizens who have made it their own, often in difficult circumstances. It is an innovation for which the RuNet is famous, and feeds into a worldwide conversation about digital freedoms and creativity.

Overseas, the RuNet is primarily known not for its investment potential, but for its users’ commitment to free access to culture and knowledge, often achieved semi-legally. Sci-Hub, Lib.ru, and LibraryGenesis are all examples of this battle around culture and copyright, which a purely commercial or political account of the RuNet's woes cannot fully address.

To date, the Duma has passed over 20 laws restricting internet freedom in Russia. It doesn't look as if they will stop, either; Loshak suggests that the next frontier may now be YouTube which, much like the online media outlets of the 2010s, is harder to bring to heel than a traditional television station or newspaper.

As the blogger Ilya Varlamov tells Loshak, the Kremlin's approach to YouTube mirrors its attempts to crack down on bloggers during the 2010s. Yet, in 2019, video bloggers are at the forefront of the social and political conversation, on a far more sophisticated and popular RuNet than a decade ago. Their ability to thrive off donations from their armies of followers presents a dangerous financial — as well as political — autonomy.

So what will the latest chapter in the RuNet’s history look like? According to Loshak, what will save the RuNet will be not professionalism, but the “idiocies of corruption” — perhaps meaning that the state’s bold plans will not be properly implemented as a result. Nevertheless, he added, the current confrontation was an inevitability:

The RuNet helps people to organise horizontally, and our authorities are used to strict hierarchies and a vertical of power. They’re in a clinch; this is by nature an ontological conflict…  I don’t see how the authorities could react other than to try and fully take it under their control.