"This is outrage against what that costume represents..." 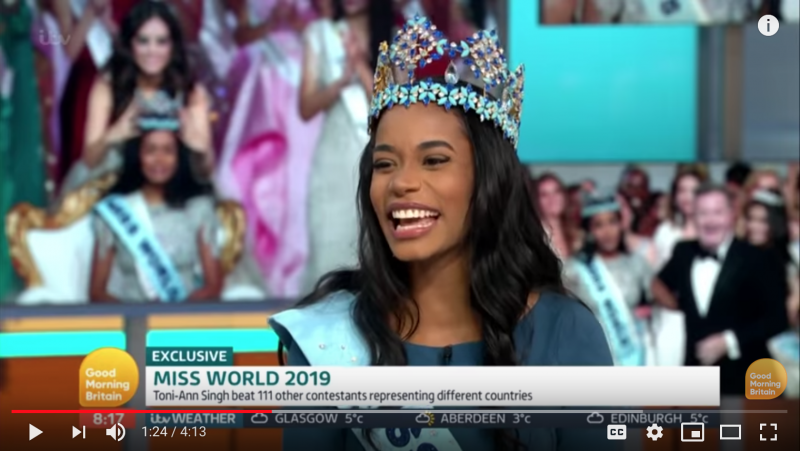 Beauty pageants are extremely popular in Jamaica. Many find these glitzy events to be an affirmation of Jamaican culture on the world stage — like sports and music.

Jamaicans celebrated on December 14, 2019, when Jamaican Toni-Ann Singh won the Miss World contest. But one week prior, on December 8, Miss Universe sparked displeasure thanks to a “national embarrassment” over Jamaican delegate Iana Tickle Garcia's national costume, which paid homage to a legendary slave owner.

Singh, an aspiring doctor born in the rural parish of St. Thomas, dedicated her victory to ambitious, young country girls like herself:

To that little girl in St. Thomas, Jamaica and all the girls around the world – please believe in yourself. Please know that you are worthy and capable of achieving your dreams. This crown is not mine but yours. You have a PURPOSE. pic.twitter.com/hV8L6x6Mhi

Jamaican social media, unsurprisingly, erupted in joy and a wave of patriotic fervor:

For many Jamaicans, the Miss World crown helped assuage the anger and discomfort caused at the Miss Universe contest, when Garcia appeared on stage in a white carnival-style outfit titled “The White Witch of Rose Hall”.

Garcia's Miss Universe costume sparked outrage because it paid homage to “Annie Palmer,” the main character who features in the gothic Caribbean legend of the “White Witch of Rose Hall.” According to legend, Annie Palmer was a white woman born in Haiti, who learned to practice voodoo as a young girl. She moved to Jamaica and married John Palmer, the owner of a “great house” — Rose Hall, located in Montego Bay, which is now a major tourist attraction.

The legend is largely derived from a 1929 novel by H.G. De Lisser, replete with racial stereotypes. In the book, she was sexually rapacious, had four husbands and several lovers, including male slaves, many of whom she murdered. Eventually killed by a slave herself, the story goes that Annie Palmer's ghost still allegedly haunts the historic house.

Research shows that there was a real woman by the name of Rosa Palmer — the first mistress at Rose Hall — who apparently did have four husbands, but no criminal tendencies. Subsequently, there was a Jamaican-born Annie Mary Palmer, who had no connection with Haiti, and who died a widow in relative obscurity and not in Rose Hall. But the “White Witch” story has been crafted into a titillating attraction for visitors to Rose Hall, which offers tourists a haunted night tour during which Annie Palmer’s ghost might appear.

One Jamaican objected strongly to what the costume represented, wondering whether the contestant had objected to it:

Why would the ppl in charge of the #MissJamaicaUniverse pageant send this young lady to the #MissUniverse stage as a notorious slave master who killed countless black ppl esp black men. Also, why didn't goodie speak up? #AnniePalmer was the best y'all could do? Uno wrong fi dis. pic.twitter.com/0Vs6x0ZgJ2

[…] Dubbed the White Witch of Rose Hall, local folk legend has it that Annie Palmer ruled the 18th century plantation with an iron fist and drove fear in the hearts of loved ones and enemy’s [sic] alike. Her iconic home, the Rose Hall Great House is a national heritage site in Montego Bay Jamaica and still stands magnificently today after almost three hundred years as a popular visitor attraction where many claim they have spotted Annie Palmer’s ghost.

This outrage is not about the costume, or about whether she was real or not.

This is outrage against what that costume represents; slave masters oppressing slaves. You recognize that in your history books, you don't celebrate it as an expression of our culture.

However, Garcia's sponsors, Rose Hall Developments Ltd., stood their ground. The managers of the Miss Universe Jamaica organisation posted this response on Facebook:

With this year’s costume, we never sought to glorify slavery, nor promote witchcraft or any of the folk tales Annie Palmer has been accused of, instead, what we sought to do […] was to just tell the story of another part of Jamaican history without endorsing, glorifying or celebrating her deeds or the atrocities of slavery, and hopefully, the conversations resulting could lead to teachable moments for these same young people we were targeting, especially those who have no interest in history taught the traditional way.

Obviously, we have succeeded in this mission, as more people are now talking about this aspect of Jamaican history and we hope they will now be motivated to engage in further research in the topic to have a greater understanding of our past.

I understand they want to step outside the box […] Unfortunately, the organisers jumped out of the box and into the sugar cane fields. To those who can’t see the issue, I would want you to learn the difference between culture and history. A slave owner is not our culture; chattel slavery is our history and not something that should ever be feathered and sequined. Anti-Semitism is a part of Germany’s history, but Miss Germany wouldn’t go as Hitler, because it’s not their culture…

Nevertheless, my heart goes out to the actual Miss Universe Jamaica contestant, who probably didn’t have a say in all of this. I can’t imagine my horror if I were asked to walk down a stage dressed in slavery cosplay. The organisers released a statement that they succeeded in generating discussions about this part of our history, and even quoted Marcus Garvey. Nice try.

Given the whole debacle, the Toni-Ann Singh win at the 2019 Miss World competition felt like the ancestors at work:

Another Twitter netizen chimed in to comment on Singh’s place of birth — in Jamaica, the parish of St. Thomas is known for its practice of the Indigenous spiritual practice of obeah:

Certainly, by the time the world found out that Jamaica had won the coveted Miss World title, and that women of colour had won all five of the most major beauty contests in the world, Jamaicans were happy to join a celebration of #BlackGirlMagic and set aside the “White Witch” experience: