Scenes from Ma'shour: On the brutal suppression of protests in an Iranian city 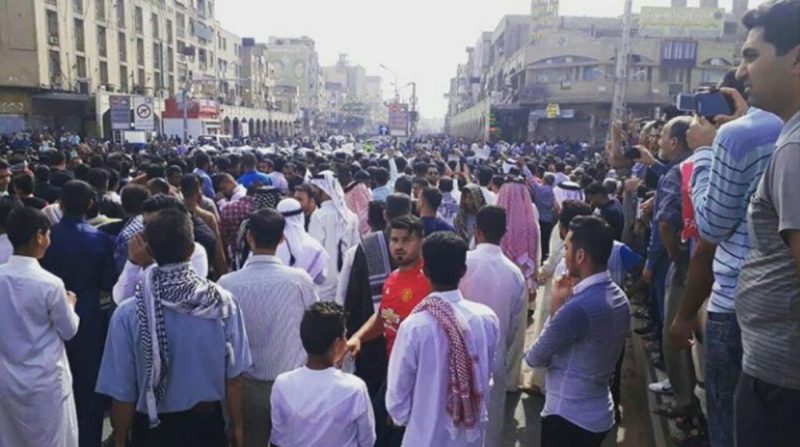 Southwest Iran is home to the city of Ma’shour, part of the majority-Arab region of Ahwaz. In November 2019, Ma'shour gained notoriety for crimes committed against its residents by the Iranian Revolutionary Guards Corps and its minions—but this latest episode is merely a continuation of the decades of misery experienced by people in the region under the regime's brutal yoke.

With a population of around 120,000, Ma’shour comprises five residential areas—Jarrahi, Koura, Khor Mussa (Sarbandar or Khomeini port), and the old and new city areas. The overwhelming majority of Ma`shour’s residents are ethnically Arab, and the city’s importance lies in the presence there of a petrochemical industry which refines the oil and natural gas resources of the Ahwaz region.

Because of the very real threat of reprisals by the regime, local witnesses spoke to the authors of this story on condition of anonymity, painting a devastating picture of a city experiencing population transfer by a racist regime. One person explained the phenomenon of “flying employees”, meaning top-level employees who come in to work and fly back the same day to Tehran. They also bring in relatives to fill jobs ranging from tea- and coffee-makers to housekeeping staff.

These “flying employees” and their relatives are all ethnically Persian; the people they displace are overwhelmingly Arabs.

The witness added that the reason these employees do not live in Ma'shour is because of the highly polluted air. The Arab population, meanwhile, lacks the means to escape from the hazardous air conditions caused by the petrochemical industry, and live in miserable conditions.
“The suicide rate is rising here,” the local witness told us. “Young people have lost hope for the future. You are deemed a criminal when you are born Ahwazi (Arab). You are condemned to deprivation when you are born Arab.”

Despite the region’s wealth, the local majority-Ahwazi population is denied access to the benefits of the area’s resources. Anger, despair, high suicide rates, disproportionately high rates of cancer, and erasure of cultural identity characterize the Ahwazi population here.

Ahwaz as a region had erupted in protests even before the start of the fuel protests in the center of the country. The catalyst was the poisoning of a popular Ahwazi dissident poet named Hassan Haidari while in regime custody, along with longstanding grievances at the regime’s brutality and ethnic discrimination.

The protests in Ma’shour were violently suppressed. When young people blocked roads leading to the petrochemical facilities with burning tires, the Iranian Revolutionary Guard Corps (IRGC) attacked them with tanks and gunfire.

Young Ahwazi protesters fled to the nearby marshlands to escape the machine guns, but the IRGC forces opened fire into the marshlands then set it afire, killing dozens of young, mostly unarmed protesters. An eyewitness explained: “We didn't take seriously what they said because we thought they were threatening us, like they had in the previous demonstrations. But they started randomly firing at the people with machine guns.

When the IRGC forces began shooting, people, including women and children, fled to Jarrahi town and some took refuge in the nearby marshes, but the [IRGC troops] shot at them indiscriminately, without mercy. About 60 people were reportedly killed in the marshlands and dozens were injured.”

Another eyewitness who lost many relatives in the massacre said that the IRGC forces deployed heavy military equipment in the Jarrahi and Koura districts. The forces also searched the area with UAV drones and helicopter gunships, and brought in other vehicles and weapons, including tanks.

While the government’s shutdown of the nation's internet initially prevented the details of the massacre from reaching world audiences, witnesses have begun telling their stories, in the hope that the regime will be held accountable for its crimes.

One such young woman told us that protesters in the Jarrahi township of Ma'shour took to the streets in earnest after protests had swept across the country. They began demonstrating at the entrance to the town over two days. They blocked off roads, a peaceful form of protest that was occurring all over Iran.

Then, the young woman continued, “We were surrounded by deadly tanks and heavy weapons. Iranian regime forces began to harass and attack us. The young men were merely standing and sitting in the middle of the road demanding their rights to work, life, wealth, security and health. The interesting thing was that most of the armed forces who were shooting and beating the Arab protesters were speaking Arabic, but with accents spoken in countries such as Iraq, Syria, and Lebanon. They were ruthless and sprayed the chests of unarmed protesters with bullets. The poor Arab protesters fell one after the other to the ground, and others desperately rushed to the marshes near the gathering place at the entrance to the city.”

The IRGC has a documented history of bringing in its terrorist affiliates to suppress Ahwazis, including Lebanese Hezbollah and Iraqi Popular Mobilization Units, as well as various entities active in Syria in support of the Assad regime, which has been increasingly propped up by Iran. Ahwazi activists both inside and outside of the region have repeatedly asked the same question: “Why do we hear about these terrorist groups when they attack others, but never when they are brought in to kill us?”

The eyewitness continued. “The forces continued shooting at those who had taken cover in the waters and reeds of the marsh. They also fired randomly at neighboring houses, and this resulted in the largest number of deaths and casualties.”

“We went to the hospital and found dozens of victims, including dead and wounded, on the hospital floor. The lack of doctors and nurses and the massive amount of blood on the floor and the walls… all stained with the blood of young people, including two dead women, one middle-aged and one in her 20s.

“We moved from the hospital to the city, and we were hearing gunfire all around. We went to the home of one victim who was a family member, when we ran into forces that started firing at us with lethal weapons that almost took down the walls. We entered the house under a hail of bullets. We all gathered in one corner of a room so that the gunfire did not hit us.”

In the days after this horrific incident, the stench of charred corpses in the marshes remained so strong that it reached across the city. Footage shows grieving families asking: “What was the crime of these deprived people? They just wanted to protest extensive oppression. In which country does the government use tanks and machine guns against public protests? But here is the Iranian regime, which burned young people alive in the canebrake.”

The devastated families were left to listen helplessly the screaming, weeping, and pleas for help from family members stranded in the marsh, and to smell their burning flesh after the regime troops set the reed beds alight.

Human rights activists in Ahwaz say the regime is even attempting to extort money from grieving families, charging them around $4,000 each to have the bodies of their loved ones returned, and even charging ‘fees’ for the bullets used to kill their relatives.

Another witness told us that “the citizens of Koura neighbourhood said ‘We have two options: to die under torture by the regime or to resist the Revolutionary Guard forces. Then the world, especially the United States government, might support our revolution against the repressive and brutal regime.’”

For four days, the eyewitness said, the protesters maintained control over Koura and Tanideh Street in Jarrahi, as well most of the neighborhoods of the city of Ma’shour, and several suburbs. “The clashes were fierce. The IRGC escaped because of the effective resistance, and the people were able to control the main road leading to the city and the adjacent petrochemical industrial complex.

“The citizens of Ma’shour were awaiting action by the international community to stop this heinous crime,” continued the witness, breaking down in tears.

That intervention never materialized. Internet service has mostly been restored throughout Iran. In Ma'shour the marshland has stopped smoking, the smell of burnt flesh is no longer in the air. But the air remains heavily polluted, and the local Arab population remains destitute, even as it reels in shock at the horror it recently experienced. The only new developments are negative: anguish for the family members of those murdered, fear for loved ones arrested and taken to unspecified prisons in the dark of night, and now despair that the world will ever take action.

There is no question that the regime's actions defy international law and fundamental morality, but as long as the powerful nations of the world fail to take direct action, there is neither comfort nor hope for the people of Ma'shour and for all Ahwazi people.

Rahim Hamid is an author, freelance journalist, and human rights advocate based in the United States. He is the editor of Dur Untash Studies Centre (DUSC), based in Canada. Hamid’s writings often focus on the plight of the Ahwazi people in Iran. Follow him on Twitter at @samireza42.

Aaron Eitan Meyer is an attorney admitted to practice in New York State and before the United State Supreme Court, and a researcher and analyst. He has written extensively on lawfare, international humanitarian, and human rights law.