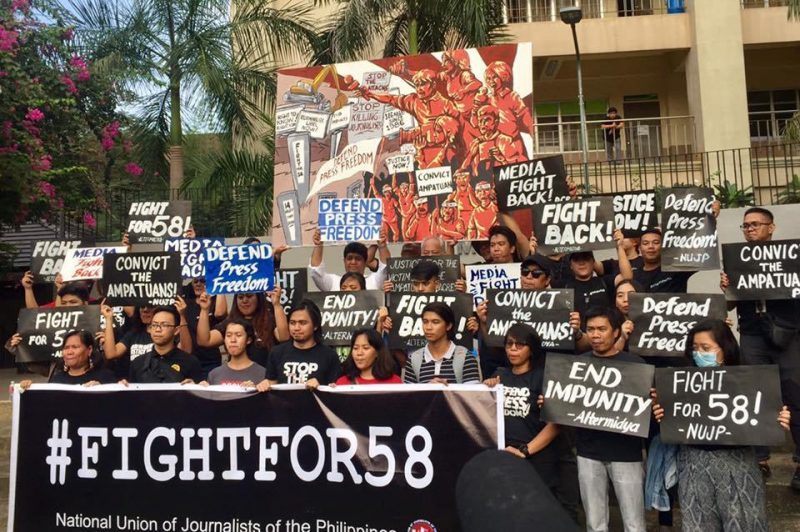 Media groups, artists, and human rights defenders gather in Manila to call for the conviction of the Ampatuan massacre masterminds on 23 November 2019 during the tenth anniversary of the crime. Source: Altermidya Facebook

A Philippine local court has sentenced members of the Ampatuan family and their accomplices to 40 years in prison for the massacre of 58 individuals — 32 of whom were journalists — in 2009.

On 23 November 2009, a group scheduled to file an election candidacy bid in Maguindanao province, located in the southern Mindanao island, was stopped at a checkpoint by the ‘private army’ of the Ampatuan family. Those who joined the convoy, including journalists who were covering it, were massacred and hastily buried on site.

It was the deadliest attack on the press and the worst election-related violence in Philippine history.

For the next ten years, media advocates and human rights groups have campaigned for justice. They kept the issue alive while monitoring the case to make sure that the Ampatuans are convicted. On 19 December 2019, a local court finally convicted the masterminds of the massacre.

But the campaign does not end here. At least 80 suspects are still at large. The Ampatuans are also expected to appeal the court decision which may reach the Supreme Court.

Meanwhile, the National Union of Journalists of the Philippines highlighted the importance of the court conviction:

The convictions and indemnification can never bring back the lives of the victims and erase the pain of the families who lost their loved ones.

But these, in some way, alleviate the suffering that they have endured for the past 10 years.

The group also recognized those who tirelessly campaigned for justice in the past decade:

The conviction of the key accused is also due to the unity and steadfastness of Filipino media workers and media groups in the country and abroad who have sustained the campaign and efforts for the past 10 years to make sure that the massacre will not be forgotten and that justice will be achieved no matter how long and hard it takes.

Altermidya, a network of independent media groups, noted that the campaign against impunity will continue:

The past ten years have galvanized us, fortified our ranks. After the massacre, killings of journalists continued. Fifteen of our colleagues have been gunned down under this administration.

Moreover, warlordism, political patronage and all the conditions that led to the tragedy ten years ago remain. The enablers of this dome of impunity remain vastly untouched.

The Rodrigo Duterte administration came to power in 2016. In the past three years, more than a dozen journalists have been killed for simply fulfilling their duty of informing the public.

A vigil and candle lighting event was organized by media groups on the eve of the announcement of the verdict. Some relatives of the massacre victims attended the gathering.

Ate Emely, relative of one of the victim recalls the brutal tragedy and calls for justice for slain relative. pic.twitter.com/N7iUgx6ar3

During the promulgation of the court decision, media advocates were joined by human rights groups in a protest gathering while waiting for the announcement.

Various groups including the National Union of Journalists of the Philippines continue ahead with their program here just outside the fences of Camp Bagong Diwa to call for #ConvictAmpatuan. The program was stopped earlier by police.#FightFor58 #AmpatuanMassacre pic.twitter.com/bD9cMGRhCt

Journalist Kath Cortez was with the children of some of the victims while monitoring the court announcement in Mindanao. She shares the impact of the decision on the children:

It's only now that I was able to understand what just happened. Today's events were difficult especially since we were joined by the children of the victims. Unlike us, it's more difficult for them to process the court decision because of what they endured.

Nevertheless, I salute them for their strength and bravery to face the media even though they were struggling with conflicting emotions. Their conviction to fight for justice for their loved ones is clear and strong.

It was an emotional moment but the kids never wavered. I hope we can be like them because the fight is not yet over.