Indian state Assam is burning in protests against #CAB 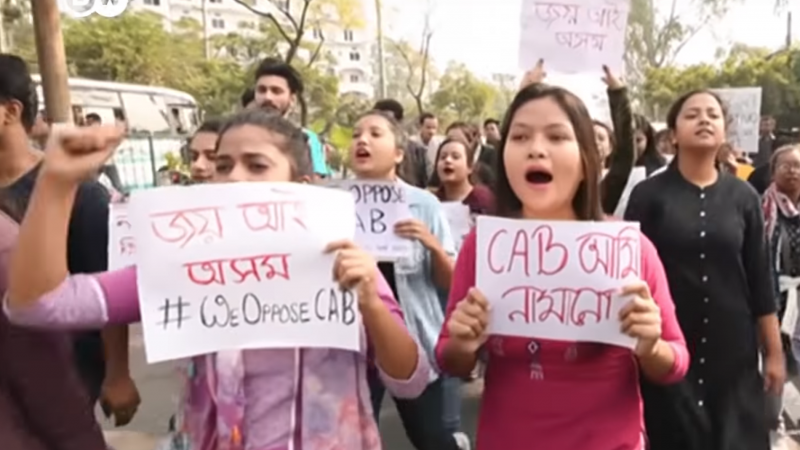 Soon after India finalized the Citizenship (Amendment) Act on 12 December 2019 to allow refugees of six different faiths from the neighbouring Afghanistan, Bangladesh and Pakistan, violent protests opposing the Act erupted in the northeastern states of Assam, Tripura and Meghalaya. While the Act has been criticized for anti-Muslim bias, most in Assam have been protesting it for fear that it will open the door to Hindu refugees from Bangladesh, and affect the local language and culture.

At least three protestors have died in suspected police firing. Protestors in major cities of Assam and Tripura have been flaming torches and setting car tires and cardboards ablaze. The internet has been blocked since 11 December in Assam and Meghalaya.

Why Guwahati exploded in protests – and what explains Assam's resistance to the Citizenship Billhttps://t.co/UQUWZO2Pn5 pic.twitter.com/suE322BAbX

Indian state Assam is burning in the protest against #CAB. The media is forced by the govt to not provide any coverage to the protests what so ever. #CABProtests #AssamProtest pic.twitter.com/EzhnwIAlaZ

Editors Guild of India seeks withdrawal of I&B Ministry's recent advisory asking all private TV channels to desist from showing content that could incite violence or promote “anti-national attitudes”. The advisory was issued in wake of violence in Assam against #CitizenshipAct

The amended Act segregates the identification of refugees on the basis of their faith. It adds new clauses to the 1955 Citizenship Act allowing the Indian State to provide citizenship to six communities — Buddhists, Christians, Hindus, Jains, Parsis and Sikhs — who are fleeing from religious and minority persecution from India's three neighboring countries. Assam is a province with 33 million people with multiple ethnicities — including many indigenous ones — and religions. Among many other complexities and historical incidents that have led to this protest is Assam Accord, a 1985 Memorandum of Settlement that provided a framework on how to deal with immigrants from Bangladesh.

What is the Assam Accord?

Assam saw a massive influx of refugees from Bangladesh since its formation in 1947 through the 1950s until the 1980s. From 1980–1984, the then Indian government led by Indira Gandhi of the Indian National Congress (INC) party engaged with those who were protesting against this influx. After the assassination of Gandhi in 1984, the Indian government led by Rajeev Gandhi initiated a Memorandum of Settlement that was signed in the presence of parties from both the federal and provincial governments and representatives from the protesting unions. The Accord brought the six-year-long Assam Movement to an end which arose with a goal to identify and expel refugees from Bangladesh. The Accord made it clear that any refugee irrespective of their religious faiths who entered India before 31 December 1965 would be given citizenship and the ones who entered after this date would be illegal. The ongoing protests in Assam also highlight the alleged violation of this Accord since the recently passed Citizenship (Amendment) Act now legalizes the aforementioned refugees who entered India before 31 December 2014.

What is the National Register of Citizens (NRC)?

Tensions and emotions are already running high as Assam is in the process of updating 33 million citizen records to detect and deport undocumented immigrants from neighbouring Bangladesh. Approximately 1.9 million people are now facing the possibility of becoming stateless in the north-eastern Indian state of Assam after being excluded from the updated National Register of Citizens (NRC).

The NRC is a government register containing the names and relevant information for the identification of all Indian citizens.

After the protests became violent on 11 December, local authorities ordered the shut down of the internet in Assam and Meghalaya to stop the spread of rumors. This also affected online mobile transactions and mobile internet connections.

Social media platforms like Facebook, WhatsApp, Twitter, and YouTube are likely to be used for spreading of rumors and also for transmission of information like pictures, videos and text that have the potential to inflame passions and thus exacerbate the law and order situation. – Officials in the state of Assam

We all know what fascist governments do in the dark. Don’t be a bystander; speak now & speak loudly.

The shutdown in Assam is reported to be in effect until 16 December. The NetBlocks Internet Shutdown Observatory that monitors internet shutdowns worldwide has reported that both mobile and fixed line connections are cut off leading to an information blackout and taking down of media coverage and free expression. It is important to note that access to the internet is officially banned in the Indian Union Territory of Jammu and Kashmir (formerly an Indian state) since 5 August after the abrogation of the Article 370 of the Indian Constitution that provided the region with a special provincial status.

The Press Information Bureau of India is tweeting about the implications of the Citizenship Amendment Bill focusing on the Indian northeast:

Busting some #Myths : #Mythbusters focusing on North-Eastern India, especially #Assam, surrounding the #CitizenshipAmendmentAct. The 11-points address the most common misconceptions and fears in the region (1/2)

Amid this conflict, the Assam chief minister Sarbananda Sonowal has appealed to the people of Assam to maintain peace and harmony. Meanwhile, the Indian prime minister Narendra Modi has shared a video on Twitter promising that the languages and indigenous cultures of northeast India will be respected after the Citizen (Amendment) Act takes effect.