'We know what it feels like to be helpless.' 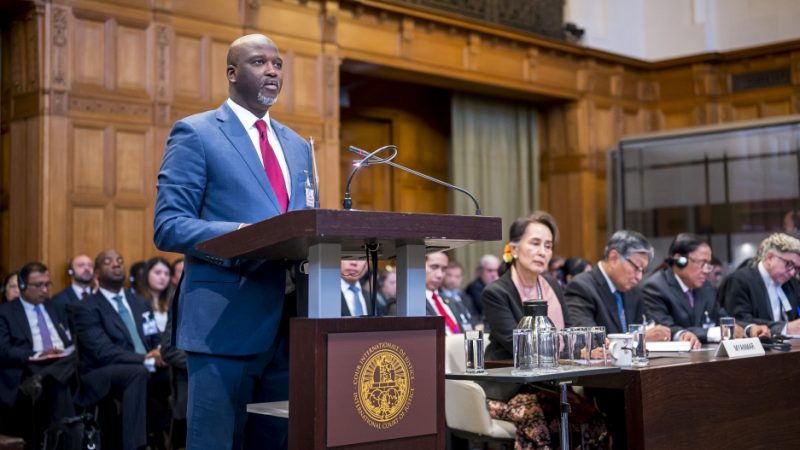 Gambia's Justice Minister Abubacarr Tambadou speaks on the first day of hearings in a case against Myanmar alleging genocide against the minority Muslim Rohingya population at the International Court of Justice in The Hague, Netherlands, on Dec. 10, 2019, as Myanmar's leader Aung San Suu Kyi looks on. Photo by UN Photo/ICJ-CIJ/Frank van Beek. Courtesy of the ICJ.

Editor's note: This interview was produced by PRI/PRX's The World and republished here through a content-sharing agreement with Global Voices. The original interview can be heard and read here.

Three days of hearings on the Rohingya genocide came to a close in The Hague on Thursday, December 12, 2019. Myanmar's army is accused of committing genocide against the Muslim minority.

The International Court of Justice must now decide whether to step in to prevent further crimes against the Rohingya.

Read more: Bangladesh's now-postponed repatriation would have turned the plight of Rohingya refugees from bad to worse

When a case is brought at the ICJ, it's because one country decides to lodge charges against another. And in the case of the Rohingya, the country that came to their defense was The Gambia, a small West African country with its own story to tell about human rights abuses.

Read more: The Gambia confronts the nightmare of witch hunts under former regime

The Gambia's Justice Minister Abubacarr Tambadou spoke to The World's host Marco Werman from The Hague on why his country is standing up for the Rohingya people.

Marco Werman: Aung San Suu Kyi said this week that the situation in Rakhine state in Myanmar has been misunderstood and that the internal armed conflict and historic intercommunal violence is really what has driven the exodus of Rohingya from the country. What makes you certain that this is a case of genocide?

Abubacarr Tambadou: I mean, to start with, the United Nations Independent Fact-Finding Mission's report clearly indicates that there is genocidal intent in the activities of the Myanmar authorities against the Rohingya. The same conclusion was reached by the Special Rapporteur of the United Nations to Myanmar. And again, this Special Adviser on the Prevention of Genocide to the Secretary-General of the United Nations also reached a similar conclusion.

Now, leaving all of those conclusive reports aside, I have visited the refugee camp at Cox's Bazaar myself and interacted with many of the refugees who recounted their stories to me. Now, I have had previous experience interacting with surviving victims of genocide, in particular the 1994 Rwandan genocide. I have spent almost a decade and a half as a prosecutor at the International Criminal Tribunal for Rwanda, and when I heard the stories being recounted by the witnesses, I noticed there were striking similarities — not only in the fact that there is a process of historical dehumanization that has occurred in Myanmar against the Rohingya, but also the fact that Myanmar authorities had engaged in systematic and organized operations which targeted Rohingya, targeted women. Terrible, horrendous sexual violence crimes have been documented, targeted children, in some instances burnt alive in their homes or places of worship. Men being arrested — unarmed, defenseless men being arrested, rounded up and summarily executed.

These are all indications that the Myanmar authorities want, indeed, to destroy the Rohingya ethnic group in Myanmar. And these are the reasons why we believe that there is compelling evidence to conclude that genocide had taken place and is ongoing in Myanmar.

MW: Cox's Bazar, of course, is that very large refugee camp in Bangladesh that a lot of Rohingya have fled to. What took you to Cox's Bazar in the first place, and what piqued your interest in the whole situation of Myanmar?

AT: I was in New York on another official mission for the government of The Gambia with the minister of foreign affairs at the time, back in May 2018. And at the last minute, the foreign affairs minister had to cancel his attendance at the 45th Council of Foreign Ministers meeting in Bangladesh, in Dhaka. And so he requested that I attend on his behalf. And it was when we were in Bangladesh that the Bangladesh Foreign Ministry organized a trip. And so we all went to Cox's Bazaar, and that is how I managed to find myself there. I have to say that nothing had prepared me for what I was going to see and hear at the refugee camps.

MW: As you said, you saw parallels between the accounts that you heard from the Rohingya in Cox's Bazaar, what they experience in Myanmar and the tragedy of 1994 in Rwanda. How would you compare the international community's response to Myanmar versus Rwanda?

AT: Well, I saw striking similarities in many different ways. But what is most disheartening is that the international community failed Rwanda in 1994 when we did not intervene to stop the genocide of almost a million people. And then 25 years after the Rwandan tragedy, here we are again, not doing anything to stop another ongoing genocide in Myanmar. I think the treatment of the Rohingya in Myanmar illustrates the failure of the international community to intervene and stop the genocide.

MW: Back in your country, Mr. Tambadou, The Gambia, there's also been a reckoning for past abuses. There is a Truth, Reconciliation and Reparations Commission in The Gambia that's investigating human rights abuses that happened under the 20-year rule of President Yahya Jammeh. Does that undermine The Gambia, its credibility in international human rights, or does it prepare you to deal with it?

AT: Well, our experiences in The Gambia is what has actually informed the position of the government of The Gambia to speak out against the oppression of others, wherever it occurs around the world. We believe that had the world spoken out against the abuses, the terrible claims and human rights violations that were occurring in The Gambia during the 22-year period of former President Jammeh, we perhaps would not have been under his regime for 22 years.

The fact that no one, no one helped us, no one put pressure on President Jammeh to stop his atrocities, that has led us to go through a very difficult two-decade period. We don't want others to feel our pain or our fate. We know how it feels like to be unable to tell your story to the world, to be unable to share your pain with others in the hope that they will help. We know what it feels like to be helpless. We have lived through it for over two decades, and we don't want others to suffer the same fate.

MW: What do you think it tells us that a small country like The Gambia can have an important voice and can take the lead in addressing serious human rights violations?

AT: Well, why not The Gambia? International law is not the exclusive preserve of the rich and powerful countries. International law treats all sovereign states equally. And The Gambia, as a responsible member of the international community, has its own obligations under the Genocide Convention. And by stepping up and taking on Myanmar, in this case, The Gambia is demonstrating quite clearly that you do not have to have military power or economic power to stand for justice, to stand for what is right. We are doing this in the name of humanity. We are doing this because we want the Rohingya to be recognized as human beings, for their rights to be recognized in their own country of Myanmar.

This interview has been edited and condensed for clarity.