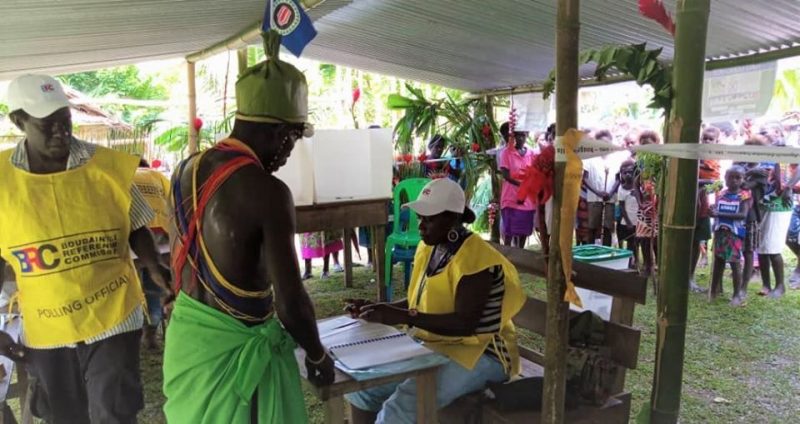 More than 180,000 Bougainvillians participated in a referendum from 23 November to 7 December and they overwhelmingly voted in favor of independence instead of greater autonomy from Papua New Guinea.

Bougainville is a region located east of the Papua New Guinea mainland although it is geographically part of the Solomon Islands in Oceania.

Civil war erupted in Bougainville in 1988 over the social and environmental impact of the Panguna mine operated by an Australian company on the island. There was unrest over how the management of the mine was not benefiting the local population. The Papua New Guinea mainland government deployed troops which resulted in an armed conflict. The crisis lasted for years and claimed thousands of lives until a peace agreement was signed in 2001 which led to the creation of the Autonomous Bougainville Government. The agreement also included a guarantee to hold a referendum in order to determine if Bougainvillians would prefer independence or autonomy from Papua New Guinea.

The parliament of Papua New Guinea will make the final decision once it receives the results of the referendum.

In the meantime, Bougainville is celebrating the successful referendum:

Its #Independence for the people of #Bougainville. 176,928 voted for #Option2 while 3,043 opted for #GreaterAutonomy from #PNG. pic.twitter.com/VGosBJ6Wbe

The Bougainville Referendum Commission issued a statement highlighting the importance of the results:

The Referendum roll had equal numbers of women and men voting

The voter turnout of at least 85 percent was high when compared with international democratic electoral experience, and is the highest of any electoral process in Papua New Guinea

The informal vote of 1,096 was low when compared with international democratic electoral experience and national elections.

Below are some photos of Bougainvillians during the referendum. Many were excited to participate in the historic voting, especially those who endured the long years of struggle during the civil war.

Yesterday my father cast his vote in the #Bougainville referendum. I lost 2 brothers during the crisis, and like countless others, reflect on the legacy of the conflict everyday. May we have a lasting peace. pic.twitter.com/OYzCzKNL7p

Counting will conducted in 3 shifts of 8 hours & results are expected by at least Tuesday next week. Formal announcement will be made by Referendum chairman Bertie Ahern. #BougainvilleReferendum #PeaceByPeacefulMeans @ForumSEC @PACNEWS1 pic.twitter.com/9LrCul8xW5

But there were also Bougainvillians who felt that the referendum should have been an opportunity to address other important concerns related to the peace process like the reparation claims of the victims of the conflict. A Facebook group named ‘Voices of Silent Bougainville’ is reminding authorities about the need to uphold human rights and consider the appeal of the ‘silent’ victims of the war. Henny Kuijpers, a member of the group, spoke on behalf of families seeking justice for the suffering they experienced during the war:

We the innocent victims of this war will never be free and the war will never end for us psychologically until our human rights, our Constitutional rights which were deprived of us as Bougainvilleans and Papua New Guineans have been addressed and sorted out by the PNG government and our ABG leaders.

Cartoonist Veteran Peter Broelman joked, "‘The government is a bunch of heartless climate-denying rorting crooks who only look after themselves’ was too long to fit on a page."

"We are resilient people, but we recognise the need for other countries to build their resilience as well if we are to have a fighting chance!"