Protests against a media house in Pakistan mount 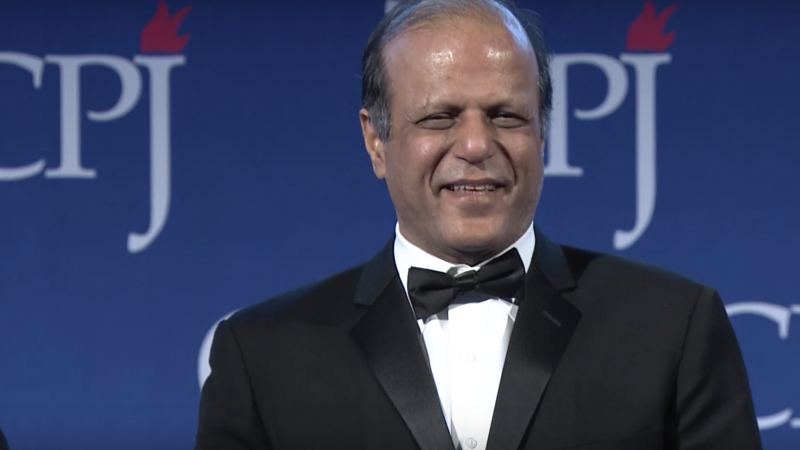 Zaffar Abbas, the Editor of The Dawn at the 2019 Gwen Ifill Press Freedom Award. Screenshot from YouTube video by Committee to Protect Journalists.

A large crowd held protests outside the Dawn Newspaper office in Islamabad and Karachi Press Club last week after the newspaper reported that Usman Khan, the London Bridge attacker, was associated with Pakistan. Khan had stabbed two people to death and left three injured a day before the Dawn report. Protestors chanted slogans against Dawn Media Group, hurled death threats, demanded Hameed Haroon (owner of Dawn) and Zaffar Abbas (Editor of Dawn) be hanged, burnt copies of the newspaper and held a number of journalists hostage for hours in Dawn Office in Islamabad, while they continued their protests.

The mob was angry that the attacker was identified as being of Pakistani origin https://t.co/zahpoAIm8f

This is not the first time that Dawn Newspaper has taken heat over their stories. Since the Dawn Leaks scandal in 2016, it has been in the government's bad books and some people think these protests are a continuation of the smear campaign against the outlet.

Dawn walas please have some mercy on this Nation, shocked on your cheap attempt to link a British terroist to Pakistan, Anwar Al Awlaki and Anjem ch both are brit origin nothing to do with Kashmir or Pak, Britain should handle its problem within—irresponsible n cheap attitude pic.twitter.com/tvldBCNMUd

Other newspapers such as The News cleverly reported saying that his parents were from Azad Kashmir but he did not attend any militant or radical training in Pakistan.

If Dawn was wrong to identify the terrorist Usman Khan as being of Pakistani origin, how should the authorities that allowed his body to be flown to our country be described? https://t.co/ZXnXptAFii

On social media, people started tweeted against the paper using the hashtag #BoycottIndianDawn:

Yet to see such a shameless media house #DawnNews that keeps retriating Indian narratives where personal interests&affiliation takes precedence over National interest.@pid_gov It's high time to fix such an unprofessional riff raff. Bloody traitors!#BoycottIndianDawn pic.twitter.com/U8fSXt58Dt

Zaffar Abbas, the Editor of Dawn News recently received the Gwen Ifill Press Freedom Award for “extraordinary and sustained achievement in the cause of press freedom.” He tweeted about the protest:

Yet another orchestrated demo against Dawn outside it’s office in Islamabad. Same lot, threatening tone, bigger in nmbr & hve blocked entrance. We hve informed police, & hve told them it’s their duty to protect our staff & property. Let’s hope someone from govt. will intervene!!

They have just dispersed after burning some copies of Dawn. Everyone has a right to protest as long as they are not violent. https://t.co/b30VFqIvQH

The Dawn was also criticized for another headline recently.

The same news is published by Express Tribune. Also the official Iranian news agency has published it. Why single out DAWN?https://t.co/JnJ4mHO9FW https://t.co/1r64OhXz39 pic.twitter.com/yJ5BvC0xKU

Umer Ali points this out:

The Express Tribune and The News used similar phrasing as Dawn. So did the state radio and news agency.

For about a year now, Dawn Newspaper has been banned from distribution in the Lahore Cantonment, and after this recent incident, Defense Housing Authority (DHA) also banned Dawn Newspaper in their area:

After harassing and threatening Dawn and its media workers (for their report on creation of Twitter trends for political agendas), the “unknown persons” are now banning #Dawn newspaper in their housing societies. Shame!

Translation: “DHA has placed a ban on Dawn Newspaper. In lieu of this paper distribute the alternate papers.”

“Is uniform (military) behind public intimidation”

Apart from leftist groups in Pakistan, politicians and opposition parties also extended their support to Dawn News. The Journalist community also protested against the incident condemning criticism of the outlet as a way of curtailing media in Pakistan. International journalists’ rights groups like the Committee to Protect Journalists, International Press Institute and Reporters Without Borders condemned the incident and asked Prime Minister Imran Khan to look into this matter urgently.