Interview with Bektour Iskender, co-founder of Kyrgyz outlet under attack for corruption investigation

Kloop.kg was subjected to DDoS attacks 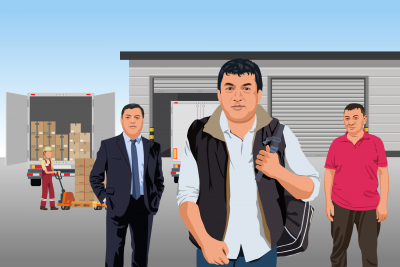 Image of Aierken Saimati (centre), one of the coordinators of a major corruption scheme which transported millions in cash with the knowledge of Kyrgyzstan's customs officials. Illustration (c) by Edin Pasović for OCCRP / Kloop. Used with permission.

Kyrgyzstan is often described as the odd one out among the five states of post-Soviet Central Asia. The mountainous republic of six million people receives better rankings from human rights watchdogs than any of its neighbours when it comes to freedom of expression, political pluralism and media diversity. It's a stark contrast to neighbouring China, Kazakhstan, and Uzbekistan. Yet that reputation has been increasingly tarnished as attacks on independent media multiply amidst a major political scandal which erupted after the publication of investigations conducted by local and international media outlets.

On December 3, the Kyrgyz civic media platform Kloop.kg, the Organized Crime and Corruption Reporting Project (OCCRP), and Azattyk, the Kyrgyz-language service of Radio Free Europe/Radio Liberty (RFE/RL), published an investigation revealing how millions of dollars in cash were funnelled out of Kyrgyzstan, mostly to Turkey, by a group of smugglers coordinated by businessman Aierken Saimati, an ethnic Uyghur from China who was shot dead in Istanbul on November 10.

Prior to his death, Saiermati shared a trove of financial documents incriminating not only several Kyrgyz businesspeople, but also the former deputy head of Kyrgyzstan's customs service Raimbek Matraimov. According to Saimati, Matraimov and his businesses benefited from the money laundering scheme.

Matraimov strongly denies the accusations, for which he is taking Kloop, OCCRP, and RFE/RL to court for defamation following the publication of their investigation. On December 12, it was announced that Kloop's bank account had been frozen by a court decision in relation to the defamation lawsuit brought by Matraimov.

I asked Kloop's co-founder Bektour Iskender to comment on the situation and speak more broadly about the challenges investigative journalists face in Kyrgyzstan today. The interview has been edited for brevity.

Filip Noubel : Kloop, the independent civic media platform you co-founded in 2007, has just been informed that a judge has ordered its bank accounts be frozen. The official reason is that the recent anti-corruption investigation you conducted with OCCRP “destroyed  the reputation” of the former deputy head of Kyrgyzstan's customs service Raimbek Matraimov, for which he demands 12.5 million soms (nearly US$180,000) in compensation. Were you expecting such an outcome?

Bektour Iskender: To be honest, yes. Raimbek Matraimov promised to file a lawsuit against the journalists last week, immediately after he had been questioned by the GKNB, Kyrgyzstan’s security services. This news was not a surprise for us at all, even though his lawyers didn't send us any official notification. Moreover, the lawsuit is an amazing opportunity to see Matraimov himself and his family in court. This is something many people in Kyrgyzstan hoped to see one day anyway. This gives us a unique chance to prove all the facts that we published in the investigation in the courtroom. We hope that the trial will be fair, and that we will be able to question Matraimov and representatives of his [customs] agency in the presence of judges and the public. Of course we are not satisfied with the court's decision to freeze our bank accounts, this is an outrageous attack on press freedom, and we will appeal the decision.

FN: Kyrgyzstan is often described as the freest or least autocratic country in Central Asia. Yet it suffers from endemic corruption, violent political transitions, and mass emigration. In such a context, what challenges do you and your team face on a daily basis when conducting investigative journalism?

BI: One thing I can say for sure is that Kyrgyzstan does not face the threat of authoritarianism. In this regard we, journalists, are in a better position compared to our colleagues in other Central Asian countries. But this does not mean that we don't face challenges. We've had plenty of them both before and after we published our investigation on corruption among customs officials. Our journalists faced mass surveillance while they were collecting information. There were DDOS [Distributed denial-of-service] attacks against our website. There is a massive wave of trolling attacks against us on social media: they have flooded our posts with comments that try to discredit our investigation. There is a smear campaign in pro-government media which labels us as ‘agents of the West’ or something similar. The scariest thing of all was that Aierken Saimiti — the person who leaked many documents to us for this investigation — was murdered in Istanbul in November. And finally, we're now facing this lawsuit. Even if the trial is fair, it will still be a huge challenge for us.

FN: You conducted the investigation around Matraimov and his family in partnership with OCCRP and Azattyk. What are the benefits and risks of having foreign partners?

BI: I would say there are only benefits. Partnering with OCCRP basically means that any attack against us will result in an immediate reaction from the international media community. It would have been so much more difficult to withstand the pressure if we were alone.

FN: What are the main risks now for Kloop and its journalists?

BI: The move to freeze our bank accounts is an attempt to paralyse our work. This will of course not stop us from working, but does create many obvious difficulties we need to overcome. There are always security risks for our journalists too.

FN: What kind of local and international support is most needed in this situation to ensure that Kloop continues to function and contribute to Kyrgyzstan’s status as one of Central Asia's freer societies?

BI: We have started a crowdfunding campaign on Patreon, which is unfortunately only available in Russian right now. Considering that we might face some financial troubles in the near future, this type of support is vital at the moment. And of course it is very important for the international community — and especially for international organisations of which Kyrgyzstan is a member — to remind the Kyrgyz authorities that they should guarantee a free and fair trial. The Kyrgyz government must be aware of the global scope that this story is getting now.

FN: No one can predict the future, but given the high profile of the Matraimov scandal, and the fact that most of Kyrgyzstan's governments ended up being toppled in massive and violent demonstrations, how would you assess the current mood of the population?

BI: Shortly after we published the first part of the joint investigation at the end of November, there was a 1,000-strong protest in [the capital] Bishkek. Considering that the authorities have not been impartial when it comes to Matraimov's case, the mood has soured into a general mistrust in the actions of the government, members of parliament, and [the] court system. However, this situation presents a huge opportunity to any major politician willing to make the fight against corruption part of his or her agenda.

That's important given that parliamentary elections will be held next year, and whichever party is able to campaign with a credible anti-corruption stance could win a lot of votes as a result.