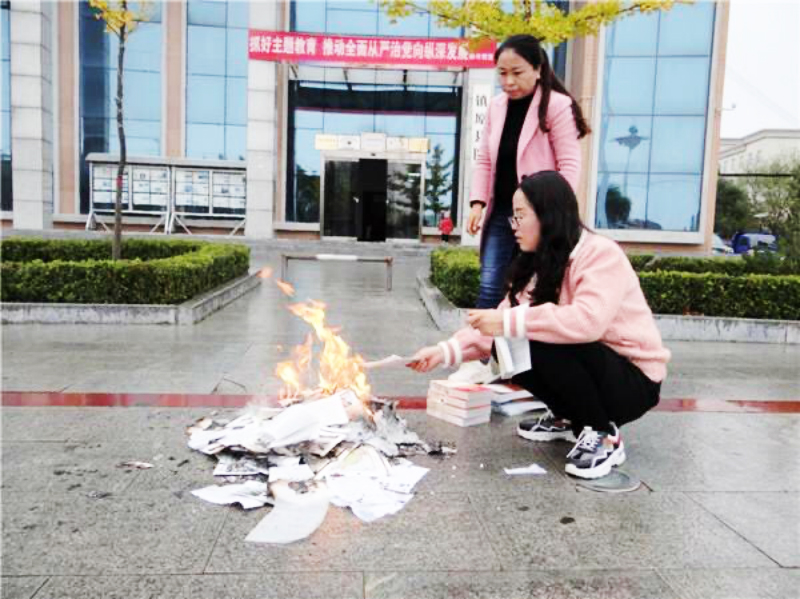 A photo showing staff members of a library in Gansu burning books in front of the building has caused an uproar on Chinese social media since Sunday, 8 December.

The image was published on the library website of Zhengyuan county in Gansu province on 23 October with an announcement that the act is to “fully exert a library's central role in broadcasting ideology through mainstream society”. The news was originally released and circulated on mainland Chinese social media platforms including WeChat and Weibo and later picked up by overseas Chinese news outlets before it went viral online. The library page was removed as a large number of critical comments emerged.

The book-burning was a response from grassroots party officials to an administrative directive released by the Ministry of Education on 15 October. The ministry demanded that all primary and elementary school libraries should cull books that are harmful to national interests, Chinese culture, and socialist core values.

Ideological struggle has become a norm in China and everyone knows that all films, books, TV drama, news and information items are subjected to censorship. However, the act of burning books openly in front of the library reminded people of the ancient barbaric act of “burning of books and burying of scholars” during the Qin Dynasty.

Even among Chinese state-affiliated news outlets, the book-burning act has caused controversy. An opinion piece running in the Beijing News called for an investigation of the incident stating that “how society treats books reflects its attitude toward knowledge and civilization.” But the commentary was quickly withdrawn and taken offline soon after and related discussion muted.

A majority of the comments from outside of China took the incident as another sign of Chinese authoritarianism. For example, U.S Senator Marco Rubio commented on Twitter:

For intellectuals living within China, the political act of burning is much more serious as it shows how the Chinese Communist Party's grassroots organs embrace dictatorship without hesitation. Chinese journalist Micheal Anti looked into the political symbolism of the performance:

How come young people just talked about the environmental impact of burning books? Are they not aware of the historical symbolism of “book burning and scholar burying”? Whenever the films want to portray a dictator, the book-burning scene would appear and the audience could see anger, tears and despair in the crowd. Burning books not only means repression of expression. It is an act of political performance for the public to have a good look at it.

@jiongnasen talked about the political effect of such an act:

Of course they could not curb freedom of thought by burning books. Just like the Great Firewall has not stopped people from visiting the free Internet. But this is no joke. The objective of thought control is not to put 100% of people under control. Once they control a sizable population of people, they could start reporting or eliminating a minority of people. Whether the “minority” is landlord or capitalist or rightist or greenish, the CCP has the say.

The act of “burning books and burying scholars” has kept recurring in Chinese history and many people anticipate the coming of darker days:

“Buring books and burying scholars” started in Qin Dynasty. [In contemporary Chinese history] the anti-Rightist campaign had persecuted thousands of intellectuals. Mao [former CCP leaders] laughed at Emperor Qin for burying 460 scholars, our anti-Rightist campaign had more than 46,000 [editorial note: more than half a million intellectuals were persecuted during the anti-Rightist campaign]. The third wave was the Cultural Revolution, countless numbers of intellectuals were persecuted. Now Bun Xi [editor note: Chinese president Xi Jinping] was behind the new wave of “burning books and burying scholars”. This person has no cultural upbringing and he follows Mao Zedong closely. It is sad to have him in control of China. He will bring disaster to the country.