Battle-scarred: The lasting impact of the PolyU campus siege on Hong Kong’s protesters 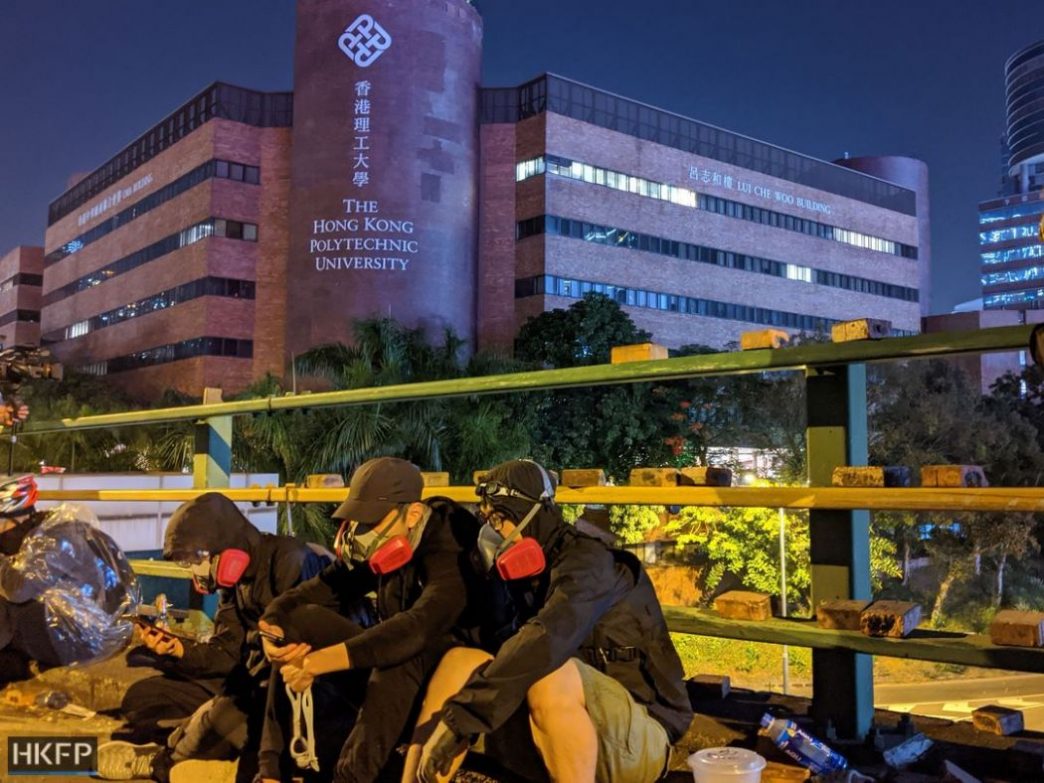 The following post written by Holmes Chan and Jennifer Creery takes a close look at the traumatic experience of the protesters. It was originally published on Hong Kong Free Press on 12 December and its trimmed version is republished on Global Voices under a content partnership agreement.

The fiercest battle in the Hong Kong anti-government protests in the past six months had been the violent clashes surrounding Hong Kong's Polytechnic University. In a single day on 18 November, riot police launched 1,491 gas canisters and 1,981 rounds of rubber bullets, bean bags, and sponge grenades at about 2,000 protesters who were trapped inside the campus. Thousands came to rescue their trapped fellows at the outskirts of the campus, resulting in multiple clashes in Kowloon district. All across the city, supporters of the protesters created roadblocks with an attempt to distract and divert the police forces. The battle ended up in a 12-day siege of the campus in which hundreds of protesters were trapped. Eventually, some were escorted out of the campus by church leaders and school principals, while others successfully escaped. However, the incident has left a deep scar for many.

Among the hundreds of protesters trapped inside Hong Kong’s Polytechnic University on the night of 18 November, surrounded on all sides by riot police, Mario and Cathy discovered a route to freedom six metres below a narrow footbridge.

All they had to do was slide down the dangling ropes and reach the drivers who were waiting at the bottom to whisk them to safety. It was now or never, Mario recalled thinking. The violent stand-off between students barricaded inside the campus and police outside had already been raging for 24 hours, and anybody leaving risked arrest. The 23-year-old told HKFP:

I was very nervous because riot police had already discovered the route. They were watching us as we were escaping, and I could hear the reinforcement police vans coming our way.

Separately, Cathy, 27, was ushering three 16-year-old students she had taken under her wing towards the ropes, but tear gas was making their escape harder. Many who attempted it were injured, either from ropes cutting into their skin or falling to the ground, some breaking their bones in the process.

Cathy and Mario – both regular frontline protesters using aliases out of fear of arrest – hit the ground with only minor injuries, and flung themselves into waiting vehicles.

The 12-day siege ended with more than 1,300 people arrested and over 300 hospitalised. Violence had reached a new level as protesters used Molotov cocktails, catapults and bows and arrows, while police fired tear gas, water cannon jets, and volleys of crowd-control projectiles.

At the height of the siege, police said that they may use live rounds, sparking fears that officers would storm the campus and conduct mass arrests amid an information blackout – similar to the infamous raid of the Prince Edward MTR station on August 31. Eventually, police opted for the alternative: a waiting game that turned the university into a pressure cooker.

The intensity of the fighting was not the only reason the PolyU siege was unprecedented. It also raised fundamental questions over how to maintain unity in a leaderless movement, now in its seventh month. It exposed tensions over tactics and strategy, underscoring the physical and mental challenges faced by protesters like Mario and Cathy as they grappled with the trauma.

Since the beginning of the movement, demonstrators have stuck to the key tenet of “Leave no-one behind, advance and retreat together.” In PolyU, however, the guerrilla-style “Be Water” tactics of street clashes no longer worked as those trapped inside found themselves encircled.

Mario and Cathy were among those who had to face a dilemma: should they stay and show solidarity with the holdouts, or escape to fight another day? The choice was further complicated by unreliable information, as protesters suspected that police sowed misinformation in chat groups on messaging apps like Telegram. Some escape routes also became quickly outdated, making every escape attempt risky.

Familiar with the campus, Cathy said that she had had an opportunity earlier in the siege to escape but chose to stay because she wanted to witness what would happen and to look after the “humble and pure” students.

Cathy recalled how one of the teenagers she met was the son of a police officer and had been facing pressure from his mother to surrender himself, but was afraid of arrest. After talking through the situation they decided to stay on campus.

Mario, on the other hand, tried to escape multiple times in broad daylight, after a group of protesters attempted to overwhelm police lines with sheer numbers. He had thrown away his protective gear, hoping it would make him less conspicuous.

That decision turned out to be a mistake:

At one point, I was breathing in so much tear gas I nearly suffocated. I inhaled tear gas with every breath, and I could feel it in my lungs. It was so painful I felt I was dying.

Meanwhile, away from the PolyU campus, 21-year-old student William (also using an alias) was busy helping coordinate the rope escapes by contacting all the drivers he knew to ferry protesters away from the bridge.

The organisers cut off sections of the road to allow only protester-friendly vehicles to pass through but, although the plan was partly successful, William said he felt guilty he could not do more, explaining that around a fifth of all who got away were arrested. He said:

It’s definitely heartbreaking. It was one of the toughest situations I’ve ever been in because I’m making decisions that affect whether or not people get out, or whether they get out safely.

Cathy, unlike Mario who was tipped off about the rope escape by a friend, stumbled across the escape route by accident. She took what may have been the last opportunity to make a break for it. Confronting the guilt that arose from seizing the chance to leave has been part of coming to terms with what happened at PolyU.

Mario said he feels he acted “selfishly” and regrets not helping more people:

I could not spread the message, because I had to put my own safety first. If I spread that message, the whole world would know and it would doom us all.

Those who successfully fled the campus also spoke with HKFP about how the sense of dread and despair over what could have befallen them threatened to break solidarity between protesters, jeopardising the unity that many felt had been their source of strength.

Both Cathy and Mario went into PolyU in the afternoon on 17 November, responding to online calls for reinforcement. As the fighting intensified that evening, police issued a statement telling everyone to leave via a bridge at the north end of the university, but protesters who tried to take the route were quickly arrested.

The consensus among demonstrators was that it was safer to stay inside as the police were not yet able to breach the perimeter. But that illusion of safety was quickly shattered: armed officers entered through the main entrance before dawn, only to be pushed back by a stream of Molotovs that turned the foyer into a sea of fire.

The following morning, many of the protesters were tired, demoralised and injured. Cathy said she only slept around an hour during a long night of heavy fighting, while Mario said that people around him “persisted by willpower alone.”

As those inside the besieged PolyU came to terms with the gravity of their situation, the infighting and bickering began. Many were teenage students, according to Cathy, who described them as totally unprepared for the clashes.

Others were too keen to hold the frontline and fight with the police, she added. She blamed them for creating a trap from which it became increasingly difficult for anyone to escape.

As the siege dragged on, reports emerged of the deteriorating mental conditions of the PolyU holdouts – which included erratic behaviour, paranoia, and even self-harm. Most stopped talking to journalists and social workers, instead, retreating into hidden spaces within campus buildings.

Mario described the situation as “mental torture” that became unbearable.

Cathy and Mario both believe what happened at PolyU was a “mistake” that betrayed the protesters’ central ideology, its fluidity and refusal to be pinned down.

Mario said it was a “painful lesson” to remind protesters of the dangers of rigid, immobile forms of resistance. Speaking with HKFP, he said he was still psychologically scarred from the experience days after emerging from the campus – shaking, suffering loss of appetite and having emotional breakdowns.

But while the siege pushed protesters to their mental and physical limits, exposing fractures along the way, Cathy and Mario said it ultimately affirmed to them the importance of working hard to retain solidarity, even under the greatest pressure.

Cathy said she was grateful for the partnerships she formed with the students:

Throughout these five months I have always been alone, but I [realised] there are always people you can work with.

Mario said that, despite the friction over how the PolyU siege played out, he felt the fundamental pledge of solidarity between protesters had survived and remained key to the movement:

I don’t agree with fighting pitched battles, but I will still choose to go in because I will not abandon my comrades. Every one of them is a person, a Hong Kong citizen… If we abandon them, our movement will have lost its moral compass.