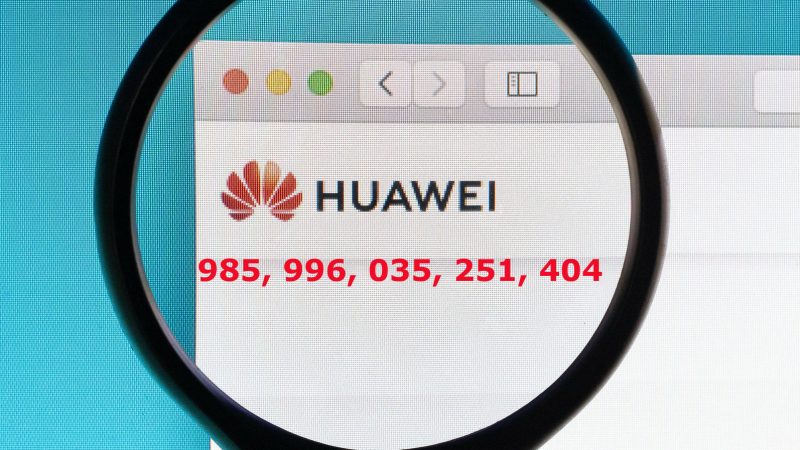 The image is derived from Marco Verch's image: Huawei logo under a magnifying glass (CC: AT)

Huawei, the most prominent tech giant in China, is considered to be one of the most successful national brands which has established a monopoly status in the domestic market boosted by patriotic buying. However, recently the corporation was under fire for staging the criminal prosecution of its former employee, Li Hongyuan, who was detained by the Shenzhen police for 251 days after the company accused Li of extortion, a charge for which Li was later acquitted.

As netizens rallied online for Li, other cases of Huawei’s bullying of former employees and critics emerged and the web censor started blocking the discussions on social media. Netizens then used a series of codes to mock Huawei's corporate bullying practice:

The incident was exposed after a court ruling document circulated online on 28 November. According to the document, Li Hongyuan, a former Huawei employee, was arrested by Shenzhen police on 16 December 2018 after Huawei accused him of extortion. He was detained for 251 days.

The court dismissed the charges due to “unclear criminal facts and insufficient evidence”. Li had negotiated with the company secretary for an employment termination compensation of about 300,000 yuan (US$42,430 dollars) and he had recorded his negotiation with the company secretary on tape. As the charge was acquitted Li received 100,000 yuan (US$14,100 dollars) compensation for his illegitimate detention.

Li later revealed to local media outlets that he had met a number of former Huawei employees in the Shenzhen detention center facing similar charges. One widely reported case was Zheng Meng. Zheng was arrested by Shenzhen police during his touristic visit in Thailand on 30 December 2018 and detained in Shenzhen for 90 days on extortion. He was in the process of negotiating with the corporation over his unpaid leave compensation.

Apart from employees, a number of netizens who criticized Huawei’s products were arrested for spreading rumors by Shenzhen police. For example, Wang Hao, who worked for a tech media outlet, was arrested in early November 2018 and detained for 252 days for criticizing Huawei mobile phone Mate 20. His charge was acquitted eventually but he had not received any compensation for his illegitimate detention.

As netizen uproar continued, the web censor stepped in to block the discussion on Chinese social media platforms. Prominent tech blogger William Long’s post on Weibo was blocked on 30 November and the blogger expressed his frustration on Twitter:

The post “Huawei former staff of 13 years was detained for 251 over employment termination compensation” was blocked on Weibo. Here I declare, I would never buy any Huawei product starting from now. This corporate is really disgusting.

Weibo and Wechat had deleted massive content related to Huawei and Li Hongyuan incident. It is unclear if the censorship comes from Huawei public relation department. The censor authority could always step in the curb the spread of negative information. Huawei had lost the public support it had accumulated since the Meng Wangzhou incident. What a shame.

Coincidentally, 1 December was the anniversary of Huawei’s CFO and Executive Director Meng Wanzhou’s house arrest. The executive is in Canada awaiting U.S-extradition trial over alleged bank fraud and Chinese propaganda had prepared feature reports to criticize the “politically motivated” legal action. Only this time, Chinese netizens did not orchestrate the reports with patriotic sentiment. Instead, they took the opportunity to slam Huawei. @Tullymonster77 screen captured some typical comments on Chinese news threads:

Huawei 251 incident has turned things all around. People all said it is just to arrest Meng Wanzhou. The party-state propaganda is in vain.

Below are some of the comments in the screen captures:

No one will be in sympathy with Meng Wanzhou now, not even if she died in jail.

(Meng is a) Canadian, she has nothing to do with Chinese people.

Canadian are too friendly. They should have put the princess into detention center. Now she can walk around with a collar. Such nice treatment.

Such a mafia corporate. No wonder the U.S has to investigate on it. It is protected by the triad [Note: traid is an organized crime syndicate] in China. How many people have they framed? Hope to see it go bankrupt soon.

On 2 December, Huawei responded on the incident with a statement:

Huawei has the right and duty to report illegal behavior to the law enforcement. We respect law enforcement authorities including the decision made by the public security police, the prosecutor and the court. If Li Hongyuan believed that his right was infringed, he could use legal means to defend his right and sue Huawei. This would enact the spirit of equality in front of law.