Astrophysicists in Ethiopia hop on ‘astrobus’ tour of cosmic possibilities

'Nothing is too big — there's no idea we call small.' 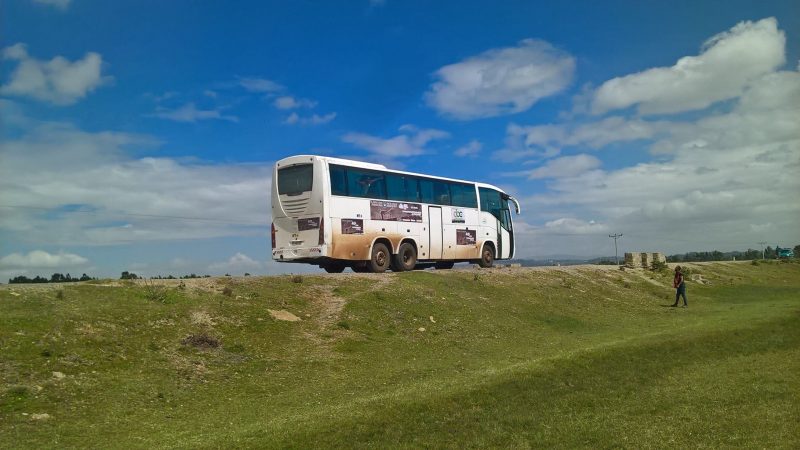 Ethiopian officials say they will launch their first satellite into space this month. In the week leading up to the historic launch, a team of 24 astrophysicists, scientists, artists, and innovators will hop on “Astrobus Ethiopia” and tour eight cities in northern Ethiopia offering hands-on workshops in science and the arts.

Departing from Addis Ababa on December 7, the group will connect with over 1,000 high school students per city at venues arranged by local universities to teach a range of workshops that encourage abstract and critical thinking. In total, they intend to reach over 8,000 students and spark their curiosity.

“The main idea here is to deliver scientific and abstract ideas that are accessible and relevant to our everyday lives, and to make connections in new and exciting ways,” Nebiha Shafi told Global Voices in a video call.

An astronomer from Ethiopia, Shafi currently works in South Africa and studies galaxy evolution. But her heart is also in public outreach — especially to encourage more girls and women to get into science. 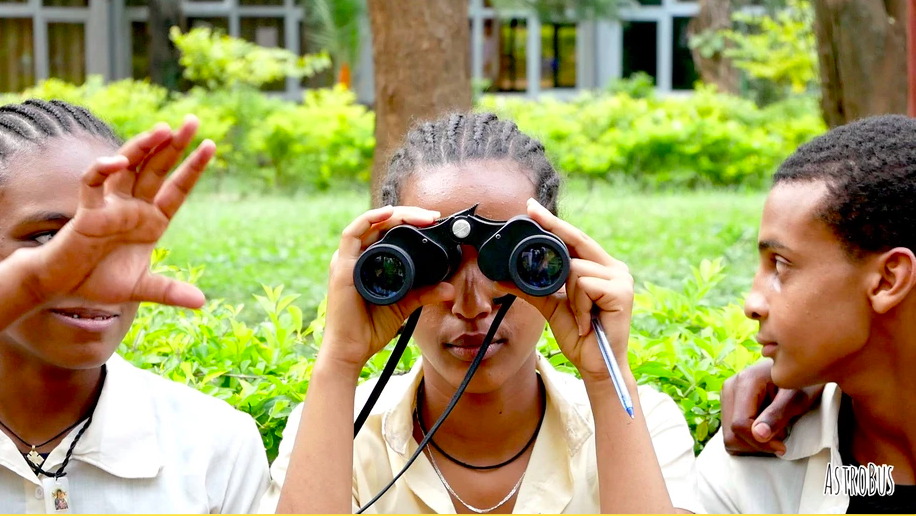 A girl looks through binoculars during an Astrobus Ethiopia workshop in 2017. Photo by Carla von Münchow, courtesy of Astrobus.

Shafi, along with cosmologist Yabebal Tadesse, who works in Germany as a freelance data scientist, have been part of Astrobus Ethiopia since its debut in 2017. Tadesse, who explores “the universe using the cosmic microwave background data,” said the idea for Astrobus Ethiopia struck him when he saw a photo on Facebook of the “Astro Truck,” an astronomy outreach project in Senegal.

Tadesse called Shafi right away and proposed the idea of doing something similar, but expanded the scope to include arts and innovation in addition to astronomy outreach. The two, together with their colleagues, immediately began to imagine the design of the project and answered a call from Astronomy for Development — a branch of the International Astronomy Union (IAU) — for funding.

“We talked to our friends, our colleagues, and everybody was excited, especially by the combination of innovation and art — it's not just science,” Shafi said.

It would take two years, however, to get the project off the ground, due to the political instability in Ethiopia between 2015-2017. “The stability situation at that time was a concern, with lots of demonstrations happening in the regions we planned to pass through, so we had to wait some time, and on top, we also wanted a partner inside [Ethiopia], because most of us were outside at that time, to [help us] with logistics,” Tadesse said in a video call with Global Voices.

The two gathered a production team and partnered with the Ethiopian Space Science Society, the first of its kind in Ethiopia.

Established in 2004 with 47 founding members, the ESSS now has 10,000 members, 19 branches and 100 school space clubs throughout Ethiopia. The ESS established the first East African Entoto Observatory and Research Center, and, as a member of the IAU, they were the perfect partner for Astrobus Ethiopia. Most of the Astrobus team members also work with the Ethiopian Space Science Technology Institute, whose motto is, “We explore the Universe for the benefit of our people!”

The Astrobus Ethiopia 2019 tour will mirror a lot of the same goals as the inaugural 2017 version in Ethiopia. The group of 24 artists, scientists, innovators and storytellers will bring young people together to learn about the stars, planets, galaxies and cosmos, but also about storytelling, photography, music, film, agriculture, and fashion. The team produces educational materials in three main local languages: Amharic, Oromo and Tigrina. 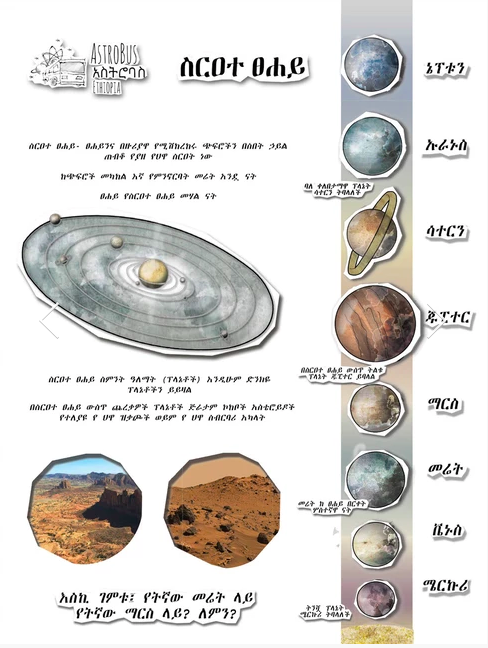 Astrobus Ethiopia has produced learning materials on astronomy and astrophysics in local languages such as Amharic and Oromo.

During the 9-day tour, students from at least 10 different high schools will gather at local university venues to learn, connect, and engage with new ideas. While many on the team are astrophysicists and cosmologists, Shafi and Tadesse said that their mission is more about critical and creative thinking than anything else.

Astrobus leaders will teach students how to approach challenges head-on, the way most innovators work in their respective fields — whether it's design, fashion, poetry, engineering, astronomy or the arts. Tadesse explained the importance of learning the “vocabularies of the challenge,” to understand and interpret, combine and compose, to create new ideas and solutions.

“We need to learn how to transfer knowledge, and transfer of knowledge requires abstract thinking” to solve problems, Shafi said.

For many students, this will be their first time holding a telescope or using drones or binoculars to study the universe. To get more equipment into the hands of curious young people, Astrobus Ethiopia has launched a fundraising campaign. 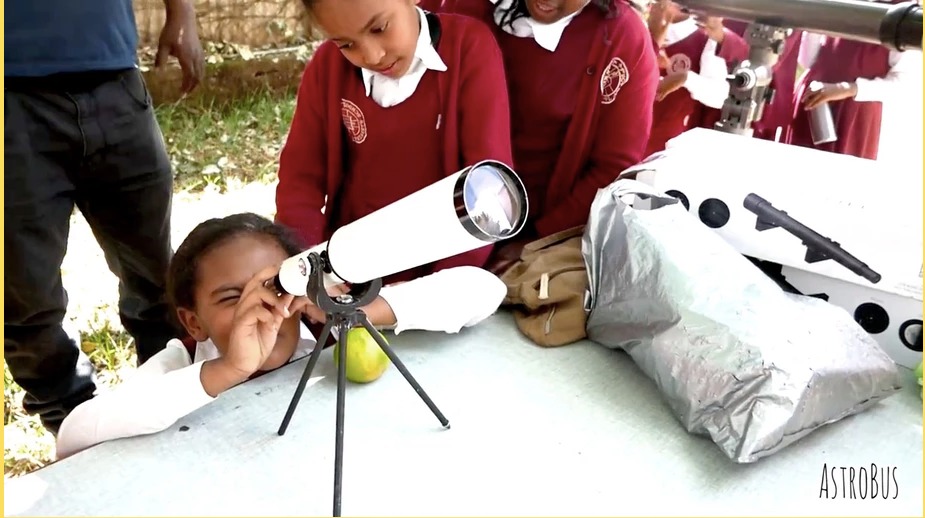 The group will wind their way back to Addis Ababa, the capital, just in time for Ethiopia's historic launch of the satellite into space, which has been announced for December 17, in Addis Ababa. The team plans to be there to celebrate Astrobus’ achievements as well as Ethiopia's national advancements in space science and technology.

“We want to tap into that, how by thinking slightly different, we sometimes can improve the system,” Tadesse said, adding that Ethiopia's latest advancements in space science and technology should be highlighted more. For example, this year's Nobel Prize in physics went to the discovery of an exoplanet orbiting a star, and the IAU asked Ethiopia to name one.

“Whatever we see happening in the country, not just nationally, but internationally, we're saying everything starts from something — a single idea that then gets transformed,” Shafi said. “Nothing is too big and there's no idea which we call small.”