'Writing toward freedom: Politics and digital rights in Africa' 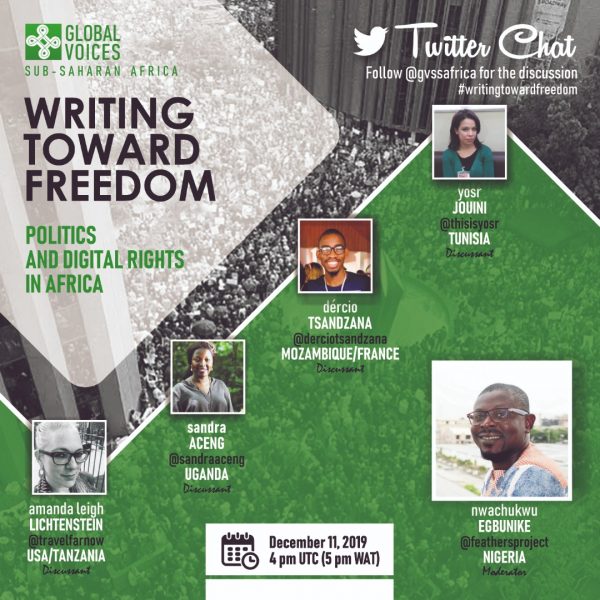 Global Voices will host a Twitter chat to discuss “WritingTowardFreedom: Politics and Digital Rights in Africa,” on December 11, 2019.

#WritingTowardFreedom: Twitter chat on politics and digital rights in Africa

Lichtenstein (@travelfarnow), Global Voices editor for sub-Saharan Africa, is the global security editor for Public Radio International's The World. As a freelance writer and poet, she has worked on a variety of literary arts advocacy initiatives in Zanzibar, Ethiopia, and the United States. Tsandzana (@derciotsandzana), Global Voices Lusophone Africa editor, is a doctoral candidate at France's University of Bordeaux. Aceng (@sandraaceng) is a gender and ICT policy advocate in Uganda. Jouini (@thisisyosr), a software engineer from Tunisia, focuses on the intersection of technology and human rights. Egbunike (@feathersproject), Global Voices Community Manager for Sub-Saharan Africa, is a social media researcher and author of Hashtags: social media, politics and ethnicity in Nigeria.

Press freedom and online freedom of expression have consistently been under threat in Africa. In 2018, Global Voices Special Coverage revealed that jailing journalists, shutting down the internet and taxing social media is the new “internet paradigm” on the continent.

Ethnic hate speech, mis- and disinformation, and government trolling also increasingly interfere with freedom of expression, access to information and political discourses online, as revealed in the series of articles written by GV contributors to the #WritingTowardFreedom project.

These interferences spike during political events like elections or protest movements. According to the project's initial findings, which covered seven African countries: Algeria, Ethiopia, Mozambique, Nigeria, Tunisia, Uganda, and Zimbabwe:

The #WritingTowardFreedom project is funded by the Africa Digital Rights Fund of The Collaboration on International ICT Policy for East and Southern Africa (CIPESA).

The discussants for the Twitter conversation contributed to this project as writers and editors. They will shed more light on the findings that emerged from the stories and engage a larger conversation on the intersection between politics, freedom of expression and digital rights.