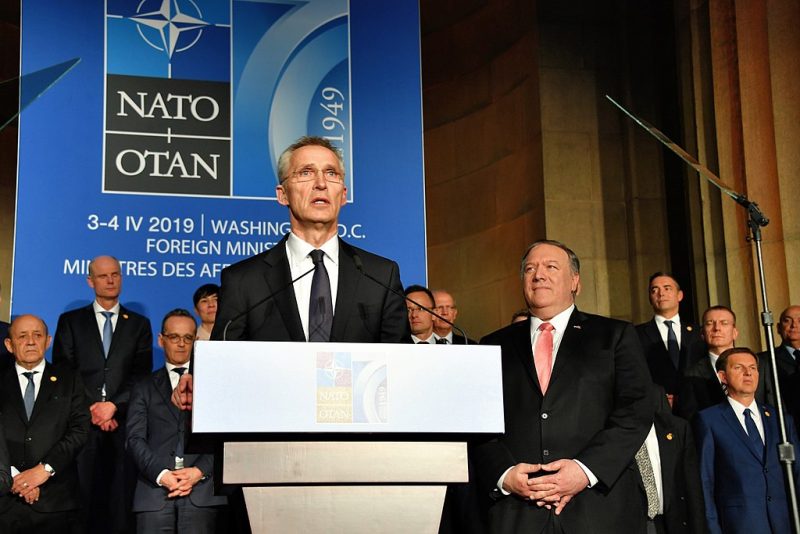 World leaders flocked to London on December 3 and 4, 2019 to mark the 70th anniversary of the North Atlantic Treaty Organisation (NATO) amid uncertainty about the alliance’s future.

Born out of the end of World War II and the Cold War as a counterweight to the Soviet Union’s increasing global influence, NATO was initially intended to serve as a defensive pact. In 1949, the US, Canada, and nations in western Europe united around the commitment that an attack on one nation would require a collective response, effectively establishing Article 5: “an armed attack against one or more of them in Europe or North America shall be considered an attack against them all”.

This week, the UK welcomed the leaders of major NATO powers, including US President Donald Trump, Canadian Prime Minister Justin Trudeau, French President Emmanuel Macron and German Chancellor Angela Merkel, all of whom have expressed some apprehension about NATO’s global role. Since 1949 NATO has expanded widely, but in recent years the leaders of these key constituent nations have sporadically disparaged the alliance, although the threat from Russia in the east remains more pertinent than ever. Russia’s annexation of Crimea in 2014 showed the world that it could, at will, seize territory on its western border and evoke little global reaction beyond condemnation, rousing the concern of NATO’s smaller members.

On its 70th anniversary, therefore, the alliance is in a vastly different shape from when it was initially established.

Trump frequently called the alliance obsolete in the lead-up to his election in 2016. He has placed a heavy focus on members’ defence spending, effectively weakening NATO through his emphasis on economics over ideology. And, at the beginning of November, Macron told The Economist that “what we are currently experiencing is the brain death of NATO,” on account of the apparent US reluctance to support European members of the alliance.

Trump jumped to NATO’s defence on Tuesday, December 4, saying that the alliance “serves a great purpose” and that Macron’s comments were “very insulting to a lot of different forces.” External, international support is imperative for key border nations in northern and eastern Europe. To question unconditional US support is deeply concerning – as are French and German proclivities to ignore the full extent of Russia’s threat.

The Baltic states, Estonia, Latvia and Lithuania, all joined the alliance in 2004, alongside Bulgaria, Romania, Slovakia and Slovenia. Today, NATO comprises 29 member states. All three Baltic countries are currently meeting the pledge to spend 2 percent of their Gross Domestic Product (GDP) on defence: the Baltics know all too well from decades of occupation the consequences of underestimating the power on their eastern borders.

However, only eight countries out of the 29, including the US, are meeting this target, with major players such as France and Germany still lagging behind. In short, while the “great” nations engage in more “pressing” power struggles, it is these smaller nations that feel most threatened by Russia, and that are most heavily invested in the future of the alliance as a defensive pact.

France, Germany and the US still haven’t quite come to an agreement over whether to treat Russia as an adversary or an ally. Germany is facilitating the construction of a gas transit pipeline from Russia, despite an alleged Russian assassination on German soil; and Macron recently asked, “is our enemy today Russia? Or China? … I don’t believe so,” adding, “our common enemy today in NATO is terrorism.” But in doing so the heads of state wilfully disregard incidents such as the allegation by German authorities on December 4, the second day of the Summit, that Russia was behind the assassination in Berlin of a former Chechen fighter, not to mention the poisoning of former KGB agent Sergei Skripal in the UK.

As attention is diverted away from Russia’s threat abroad, countries such as Turkey have arguably been seeking greater clout in NATO through acting as a southern buffer, while cosying up to Russia through acts such as the purchasing of a Russian S-400 missile system. Turkey was arguably holding fellow NATO members hostage until Wednesday, with Ankara demanding NATO support its effort to suppress the Syrian Kurd forces that Turkey terms “terrorist” organisations.

Prior to Turkish President Recep Tayyip Erdogan’s departure for the NATO meeting, the country refused outright to support NATO’s defence plan for the Baltics and Poland, denying that it was blackmailing fellow members. If the Baltics were nervous, they did not show it. “We are working together with the countries of our region, as well as other allies, to soon obtain approval for the updated defence plans,” Estonian Prime Minister Jüri Ratas said in a statement on Tuesday.

But there was still hope for the Baltic nations. NATO Secretary General Jens Stoltenberg reassured reporters on December 3 that NATO did have a plan to defend the Baltic countries. “We are proving every day that this alliance is agile, is active and is delivering,” Stoltenberg said. “For the first time in history we have combat-ready troops in the eastern part of the alliance,” referring to NATO’s Enhanced Forward Presence in the Baltics.

Later on December 4, Turkey dropped its demands. “Today we took an important step,”  Lithuanian President Gitanas Nauseda said in a statement, “During the meeting we agreed that NATO defense plan for the Baltic States and Poland would be approved. This is a huge achievement not only for our country, but for the whole region, because it ensures security of our citizens.”

The priorities of NATO are certainly changing in a rapidly changing world, but this meeting has shown that it can still pull through for its most committed member states. Whether that will continue remains to be seen.