For the second time this year, the Georgian Dream government faces mass demonstrations 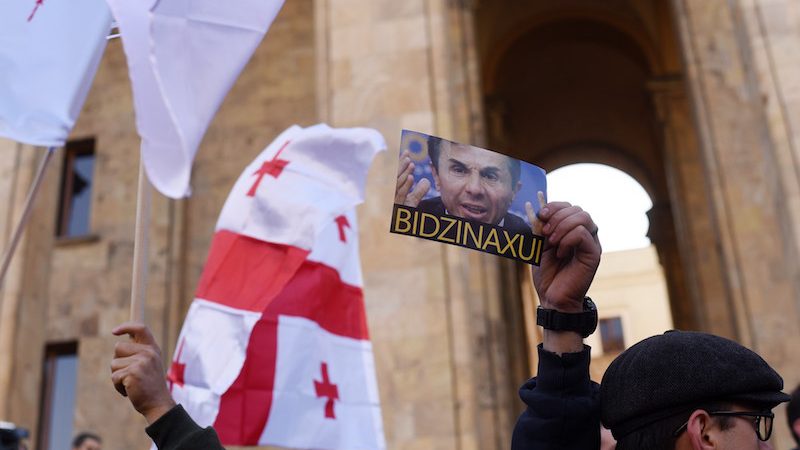 A protest against Georgian Dream and its leader Bidzina Ivanishvili outside the parliament building in Tbilisi, November 2019. Photo (c): Mari Nikuradze / OC Media. Used with permission.

Protests continue in Georgia's capital of Tbilisi after the ruling Georgian Dream party reneged on a promise for electoral reform.

On at least two occasions last week, police used water cannons against protesters, who have been picketing the parliament building to demand that the government transition to a fully proportional electoral system. As tensions have risen, metal barricades have been erected around Georgia's parliament. Online, heated debate has erupted around the hashtags #GeoElectoralCrisis and #სირცხვილია (“It's a shame” in Georgian).

Electoral reform was one of the promises made by Bidzina Ivanishvili, the influential chairman of the country's ruling Georgian Dream party, following violent clashes between police and protesters in June. But when a parliamentary vote was held on November 14 concerning the new electoral system, it was very narrowly defeated, with 101 votes for, three against, and multiple abstentions. Ivanishvili expressed regret about the result, but some observers doubted that Georgian Dream's parliamentarians would have brazenly voted against their own government's proposal without prior approval. Since that vote, 12 MPs have since left Georgian Dream, including prominent former ministers.

Georgia's parliament consists of 150 seats; 115 of which are currently held by a Georgian Dream-led coalition. According to calculations by Open Caucasus Media, a partner of Global Voices, Georgian Dream would have held 74 seats had the 2016 elections been held under a proportional electoral system. Georgian Dream has since argued that the current mixed electoral system cannot be put to another vote in time for parliamentary elections in October 2020. Although party leaders have voiced support for amending the constitution to allow the 2024 parliamentary elections to use the new system, they have also launched a PR campaign arguing that the so-called “German model” proposed by the opposition is unconstitutional.

However, as a gesture of goodwill, Ivanishvili promised that the party would stand down its candidates in certain constituencies to enable a more diverse selection of views to be heard in parliament.

Our demand is unchanged – we demand proportional elections as a guarantee that no party in this country will be able to seize a constitutional majority and govern against the people's will!

We promise Georgian Dream their winter will be unbearable.

They maintain that the parliamentary vote was a ploy, enabling Ivanishvili and his party to stay in power despite low approval ratings.

OC Media's editor Mari Nikuradze pointed out that a long-awaited meeting between Georgian Dream officials, opposition members, and foreign diplomats did not include protest organisers:

This is the meeting between GD, opposition and diplomats. #TbilisiProtests organisers weren't even invited. Nothing to expect I guess. pic.twitter.com/SmF48jXKVd

Since that meeting, protests have continued in the Georgian capital. On the evening of December 2, demonstrators in central Tbilisi were attacked by a group of men who, according to one OC Media journalist, were Georgian Dream supporters.

How did we get here?

Georgian Dream has ruled Georgia since 2012, when it defeated Mikheil Saakashvili's United National Movement (UNM) in parliamentary elections. Saakashvili fled Georgia shortly thereafter, and was sentenced by a Georgian court of abuse of power in 2018 on charges widely considered politically motivated.

Ivanishvili sought to distance himself from his predecessor as far as possible. That wasn't difficult. Saakashvili, an American-educated lawyer, has quite a different background from Ivanishvili, whose fortune, estimated at $5.4 billion, was largely earned in Russia. For the people of Tbilisi, his glass mansion towering above the historic district of Sololaki is a daily reminder of the influence he enjoys in this South Caucasus state of 3.7 million.

In recent years, that influence has become a subject of great contention. Despite a brief stint as prime minister in 2012-13, Ivanishvili's power has largely been informal or exercised through his chairmanship of Georgian Dream, a role he has occupied and renounced several times. Georgia has had many prime ministers since Ivanishvili left that post, and it has not gone unnoticed that his four successors and several current and former government ministers have had close business and personal ties to the billionaire, particularly via his former company CARTU management. This situation is now being described by Transparency International Georgia as one of “state capture.”

The year 2019 has been one of the rockiest for Georgian Dream's rule. In late June, mass protests broke out when the Russian politician Georgy Gavrilov was invited to address the Georgian parliament. Given that Russian troops are present on 20 per cent of Georgian territory, in the regions of Abkhazia and South Ossetia, it was a provocative move. Police responded with a violent crackdown in which several of the 20,000 protesters lost their eyes after being shot with rubber bullets. The symbolism was important; Georgian Dream had come to power on a wave of popular anger at the increasingly heavy-handed rule of the UNM government, particularly its violent repression of a protest in Tbilisi in 2007. Now, it seemed to be following their lead.

The UNM's line, articulated by Saakashvili from his European exile, is that Ivanishvili is pro-Russia and therefore a threat to Georgian sovereignty. A softer version of this argument holds that such heavy handed rule inherently follows a Russian model. The tenor of the criticism and the leanings of the critics may differ, but several observers of Georgian politics told GlobalVoices that they felt Ivanishvili had overreached in consolidating control of Georgian politics, triggering a backlash.

Ghia Nodia, director of the International School for Political Science at Ilia State University in Tbilisi, stressed the geopolitical aspect:

This crisis was started by cheating, Ivanishvili is seen as a person who played a trick on the people. This means he cannot be considered a trustworthy person (not that he was really trusted before, but this time he crossed another important red line). On the other hand, he is prepared to do anything to maintain power. [The opposition] also did not know what exactly to do to counter Ivanishvili’s unexpected move. This was a recipe to radicalization: the strategy appears to be to discredit Ivanishvili further. The Russian factor is also very prominent in the discussion. Ivanishvili is seen as somebody who is bringing Georgia closer to Russia. This means making Georgia more autocratic, that is Russia-like; but this also means that Ivanishvili has alienated the West and is indeed more isolated than ever before – which means that this moves him closer to Putin’s Russia also in a geopolitical sense.

Kornely Kakachia, Professor of Political Science at Ivane Javakhishvili State University in Tbilisi, stressed the personal nature of the confrontation. Ivanishvili's rivalry with Saakashvili, he says, has escalated into a dangerous zero-sum game:

Due to the highly polarised nature of Georgian politics and Ivanishvili's personal feud with Saakashvili, both consider that they can't afford to lose an election. At the end of the day, this is about survival not only of the regime, but of his personal wealth, security, and privileges. So when he promised proportional representation under pressure, he miscalculated. He's now calculating his chances more carefully. But Georgian Dream is very eclectic, a marriage of convenience which almost collapsed without his financial support. I think it's too late for him, and he thinks that by demonising Saakashvili and the UNM he can still cling onto power. But he's lost a lot of credibility, and unlike his predecessors, he doesn't know how to leave with grace.

This confrontation is perhaps why Georgian Dream politicians and their supporters have often presented the protests in the capital as nothing more than an attempt by the disgraced UNM government to return to power outside the ballot box. Some participants emphasised to Global Voices that while UNM supporters are present on the streets, the movement is diverse, including libertarians, social democrats, socialists, and neo-nationalists.

Grigol Gegelia, a historian and politician from Lelo, a recently founded centrist party in Georgia, told GlobalVoices that the country “had a chance to adopt a progressive, inclusive electoral system which would have enabled our feeble democracy to move beyond the two-party dichotomy which has harmed our political culture in radical ways.” This was not, stressed Gegelia, a “Mishist” (Georgian term used for supporters of Saakashvili — ed.) movement.

Similarly, some commentators disillusioned with Georgian Dream are no less disturbed by Saakashvili's seeming ability to regard every political protest in Georgia as a referendum on his return:

So let's look: who is the alternative to Georgian Dream?! I don't want these guys to be in power forever, but I also don't want ‘them’ to return. […] An alternative must take root in the hearts of society. […] It must also be said that Georgian Dream is a serious problem, while the last government was a tragedy. That's the difference: a problem can be solved, but a tragedy cannot be resolved.

In the words of Sopo Japaridze, a Tbilisi-based activist with the Solidarity Network, an independent trade union, the rivalry between Georgian Dream and the UNM has largely focused on “on who the parties are compared to what they do.” This was why some members of the wider Georgian Dream coalition, in which the party of the same name was the largest force, have switched allegiance in recent years. Beka Natsvlishvili, an independent MP who quit the ruling coalition in February, told Global Voices that his hopes for a more socially-oriented government after the fall of Saakashvili had been dashed:

I hoped that Georgian Dream would change the neoliberal path chosen by Saakashvili. Any of my suggestions in this regard were rejected so I found no reason to stay in the [parliamentary] majority. Georgian Dream is a party of power, without any ideology, typical for Georgia and the post-Soviet space. When they lose power, they disappear, because supporters have no reason to stay with [such a party]; it can no longer ensure you a job in the state sector or any other services. This has happened with almost all ruling parties in Georgia. The exception is the United National Movement, because they elaborated an ideology of neoliberalism combined with anti-Russian nationalism.

Georgian Dream's support is just based on fear that UNM could regain power and take revenge on its opponents. So because Georgian Dream improved the human rights situation, it did almost nothing to improve social rights. We have now neoliberalism with a human face. Because of this dominant discourse, dominant parties offer no real programmes to solve people's problems.

In a country where the average monthly wage is just equivalent to 400 USD, social inequality can easily boil over into political resentment.

Just as in 2004, when Saakashvili's UNM and its allies toppled the ailing Eduard Shevardnadze in the Rose Revolution, Georgian Dream presented itself as the saviour for a country with a broken social contract. And as Georgians seemingly become disillusioned with Georgian Dream, it is unclear who their next saviour will be. As the long-term observer Stephen Jones has written, that cycle of salvation and betrayal is the ultimate tragedy of Georgian politics today: “A widening chasm between leaders and led which leads in the end to a popular explosion.”