Collage of photos of Prime Minister of Republic of North Macedonia Zoran Zaev (Public Domain photo [2] by Government of RNM) and the activist Greta Thunberg (photo [3] by European Parliament, CC BY).

On November 29, the Macedonian government informed the public that two people attempted to deceive Prime Minister Zoran Zaev by falsely presenting themselves as Swedish climate activist Greta Thunberg and her father.

The announcement was made during the International Conference e-Society.mk: Open Institutions and Accountability [5] by Marjan Zabrchanec, a special adviser of the PM, who did not specify what date exactly the telephone conversation took place.

The adviser added that the conversation was scheduled through a Macedonian diplomatic mission and that Zaev realized mid-call that he wasn't speaking with the actual Greta Thunberg.

Zabrchanec said an investigation concluded the incident was a “hybrid attack” [6] against Macedonian institutions, and that its perpetrators used a US phone number and “branded channels.”

Following the investigation, the government of North Macedonia notified the Thunberg family.

Zabrchanec said that the attack was “even more sophisticated than the one conducted by the Russian pranksters,” in reference to occasions in 2018 and early 2019 when Russian media personalities Lexus and Vovan held lengthy phone conversations with Zaev pretending to be then-president of Ukraine, Petro Poroshenko. 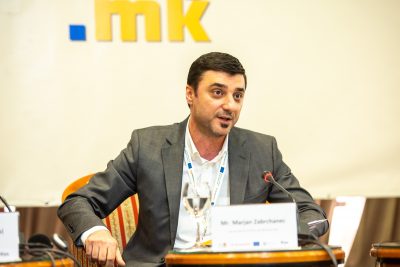 After the Russian duo revealed the stunt in July 2019, Zaev apologized to the public [8]about the lapse in his security protocol, claiming he was deceived by “a well-organized and inventive structure, which is directed at people and countries aligned towards Euro-Atlantic aspirations in order to cause damage.”

Local experts consider [10] these activities a form of Kremlin propaganda [11]. The goal of such attacks is to extract embarrassing quotes from public figures and demonstrate the ineptitude of the targeted institutions, ultimately undermining public trust.

On July 27, North Macedonia announced a new plan [12] to curb the spread of disinformation which included “revising the existing and creating new, where needed, internal security protocols for communication in the institutions and communication with external entities.”

The 16-year-old activist Greta Thunberg is the founder of the #FridaysForFuture movement, which recently mobilized millions of children and adults from around the world to demand their governments take action against the climate crisis. On September 23, she made an emotional speech at the UN Climate Summit in New York, United States, summoning all world leaders to help halt global warming.

According to EUvsDisinfo [13], a project by the East Stratcom Task Force [14] funded by the EU, Greta Thunberg has become a target of Russian disinformation campaigns:

Greta Thunberg is a trigger for the pro-Kremlin disinformers not only because she refuses to bow down to the stereotypes of what a 16-year-old girl should say or do (although chauvinism and disinformation [15] are two peas in a pod). Greta is a target because she is the face of a global grassroots movement – a genuine popular protest, the possibility of which the pro-Kremlin media simply cannot accept. Doing that would expose just how viciously Russian citizens are denied [16] the right to peaceful protest.

Following the activist's appearance at the UN, an anchor of a Russian state TV channel described her as a “sick girl who is as stupid as she is naïve [17],” “the prophet of a new totalitarian wave” and “illiterate, fanatic Messiah.” [18]

Russian media proxies in the Balkans [19] have also replicated similar insults against Thunberg.

The timing of the suspicious phone call to Zaev coincided with preparations for the November 29 #FridaysForFuture protest [20] in Skopje.