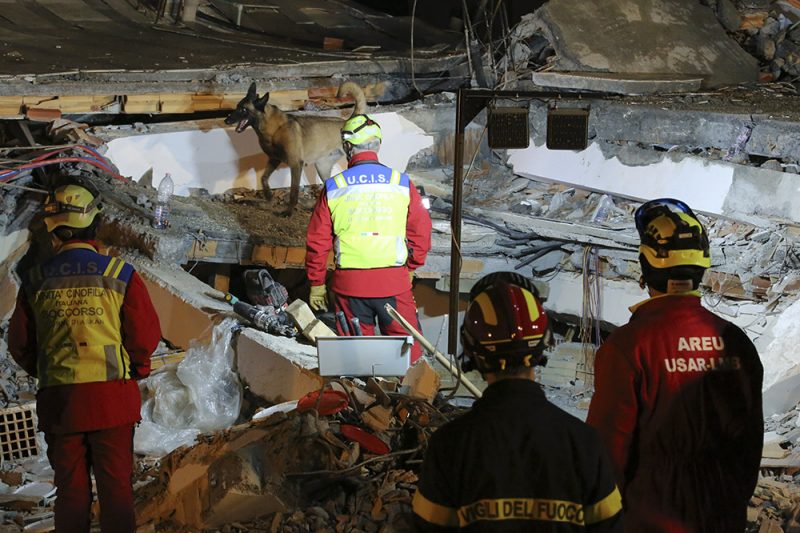 International rescuers searching for survivors in Durres, Albania on November 27, 2019. Photo [2] by Dipartimento della Protezione Civile, the national body in Italy that deals with exceptional events, (CC BY 2.0)

The search and rescue operation following the catastrophic 6.4-magnitude earthquake [3] that hit Albania before dawn on November 26, 2019, ended on Saturday, November 30. The ministry of defense reported [4] that the death toll in the port city of Durrës and the nearby town of Thumane reached 51, with thousands left injured and homeless and over 2,400 buildings damaged.

The search and rescue operation for earthquake survivors in Albania has ended, the prime minister said, with the death toll at 51 and no more bodies believed to be in the ruins. https://t.co/xJ6d9iLM4I [5]

The small town of Thumane [7] experienced the highest death toll from Tuesday's quake [3] with 26 people killed, six of whom belonged to one family, and but one of whom was under age 30. They were buried Friday, the VOA reported. [8]

The funeral of 11 people who lost their lives as a result of earthquakes striking Albania was held in Thumana on Friday.

Preliminary figures [11] showed more than 1,465 buildings in the Albanian capital Tirana, and about 900 in nearby Durrës, were seriously damaged in the quake. About 2,000 people were injured and at least 4,000 are homeless. About 2,500 people whose homes were damaged have been relocated to hotels. Others have been taken to neighboring Kosovo or have moved to areas in eastern Albania, AP reported [11].

Drone view in one of the most damaged parts of the earthquake in Thumanë, Albania ???#Albania [12] #earthquake [13] pic.twitter.com/IAXAs4wcwz [14]

Save the Children announced [16] through a press release that 9,000 children are in need following the earthquake.

In a cabinet meeting, Prime Minister Edi Rama said that the homeless will be re-housed by mid-December and Lek 1 million (USD~8,985) compensation would be given to the families of people who lost their lives.

Humanitarian aid has been pouring in from all over the world, especially from Albania's neighbor countries. Thousands of homeless Albanians are staying in camps set up by Kosovo's government in the city of Prizren and elsewhere [19].

The Mayor of Durrës, Valbona Sako, resigned [20] on Sunday after a statement she made on live TV that “we are happy we only had 50 victims” (at the time of the interview) from the earthquake. While she meant to say that it could have been much worse, her unfortunate choice of the word “happy” in relation to the disaster was received with furry by netizens:

1) Mayor of #Durres [21] Valbona Sako has resigned citing negative reactions after she told interviewer “we are happy with 50 victims”, meaning could have been much worse in #AlbaniaEarthquake [22]. She made the announcement in a Facebook post pictured below. pic.twitter.com/cmeEkbSH9V [23]

Facebook post translation: Hurt by the overwhelming negative reaction to my statement, under stress that transcends my powers, I resign from the office of Mayor of Durrës.

Thanks from my heart to all those who believed in me and I hope for understanding by everyone.

Another statement by Sako that the affected people were accommodated in 5-star hotels, was received with vitriol and sarcasm:

We are grateful that the earthquake destroyed our homes so Valbona Sako can take us in 5-star hotels; in normal conditions we could have not afforded not even for holidays

As the authorities and foreign experts are assessing the damages, the government has established a special web site to collect donations to help the affected families [27]. Besides offering a way to donate securely and directly, the government's system also enables users to register to volunteer, donate food, clothing and toys, and sign up to “adopt” —i.e. offer shelter to—people have lost their homes.

Establishing a single official point for online donations designed to foster trust and prevent misuse of the goodwill of Albanian and other contributors in the region. During similar disasters in the Balkans, like the 2016 flood in Skopje [28], portions of the humanitarian aid were intercepted and appropriated by local corrupt structures or online swindlers.

Donate online at e-albania portal and help relieve the earthquake's aftermath!https://t.co/Idul8rEnIA [29]
You can donate in three categories provided for funds collecting, using a credit or debit card according to the guidelines.#SolidaryAlbania [30] pic.twitter.com/FEdoW6lmjp [31]

Private donation initiatives have also been launched, especially by members of the Albanian diaspora:

Celebrities of Albanian origin such aas Dua Lipa, Rita Ora [43] and Bebe Rexha [44] also have launched appealed for donations from their fans around the world.