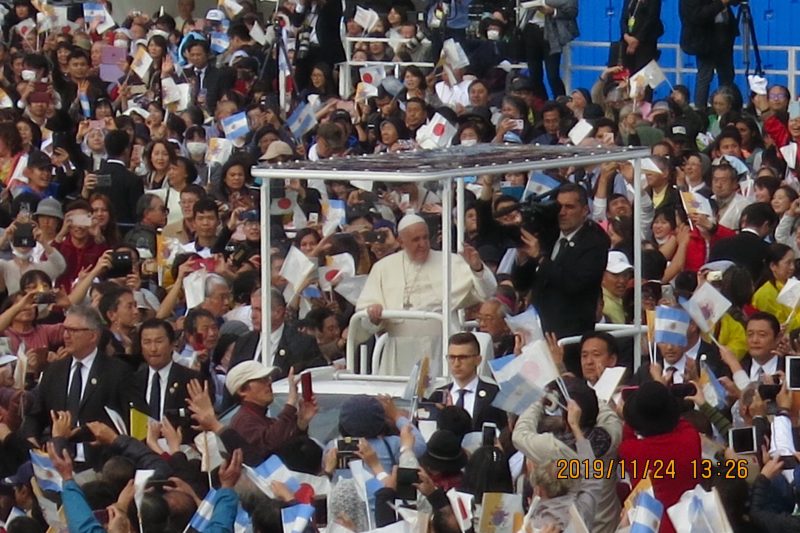 The first papal visit to Japan in nearly four decades highlighted the country's historical Christian heritage, identified major challenges faced by the rest of the world, and provided an opportunity for both the Pope and the people of Japan to buy some great Pontiff-themed kitsch.

Pope Francis began his four-day tour of Japan on Saturday, November 23, the first papal visit to Japan since St. John Paul II in 1981. The first major stop of the trip was the western city of Nagasaki, where the Pontiff held an outdoor mass in a baseball stadium that attracted at least 30,000 people. 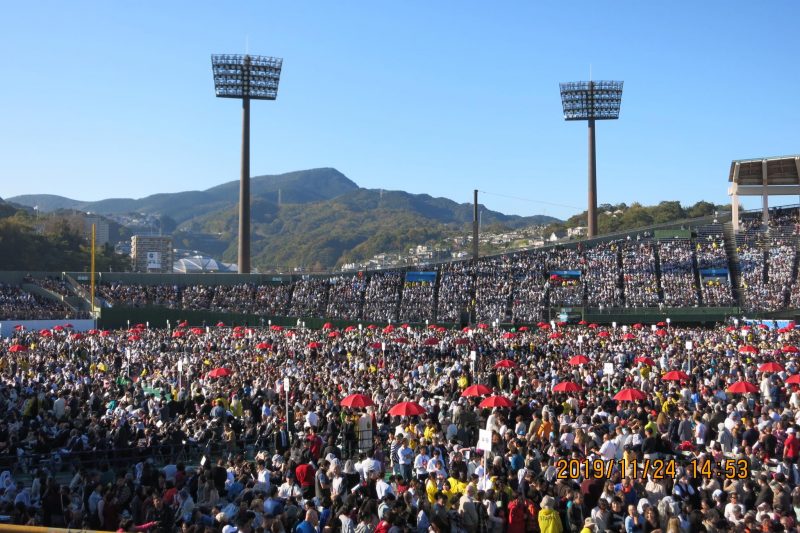 Koga Masao, a resident of Nagasaki, attended the mass and shared his thoughts about the experience on Facebook (extract published with permission):

POPE IN JAPAN 2019
Should I go to Nagasaki Baseball Stadium to take some photos? I waited for the thunderclouds to pass before setting out. It was standing room only, with the main mass out on the playing field. We entered the stadium one by one, just like Disney World! It was the first time in a long time that I had lined up for anything.

I was a little unsure about what to do during the mass, and rose to my feet a little late. As things progressed, the clouds cleared and the blue sky appeared, and the same Mount Iwaya that witnessed the bombing of Nagasaki now observed Pope Francis conducting a mass for the citizens of Nagasaki. And it made me nostalgic for February 26, 1981 (when St. Pope John Paul II came to Nagasaki).

Watching from the outfield, I was impressed by the grandeur of the production and by the communion. I got an extra commemorative edition of the Nagasaki Shimbun newspaper and made my way home. I was struck by a wave of over 30,000 people who had also come to see Pope Francis.

During his address, Pope Francis made explicit reference to the bombing of Nagasaki on August 9, 1945, just days after the bombing of Hiroshima. At least 35,000 people were instantly killed when a U.S. airplane dropped an atomic bomb on Nagasaki, directly above a Roman Catholic cathedral in a southern suburb of the city. 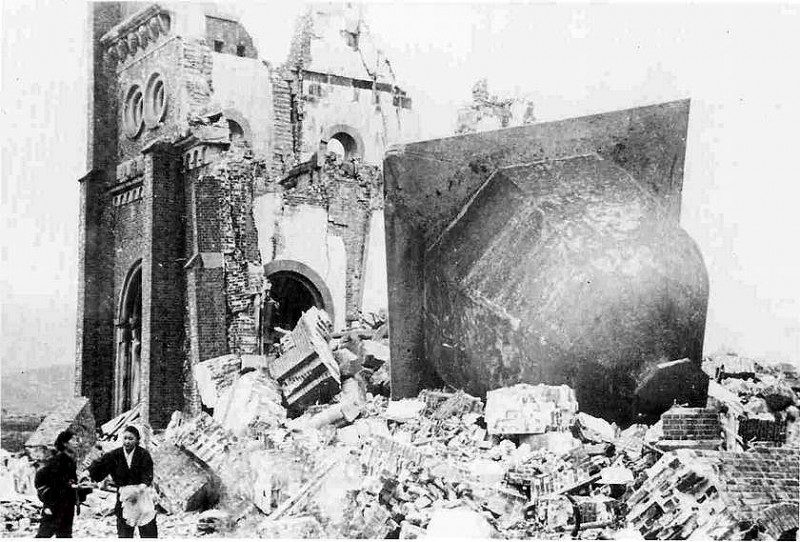 The remains of Urakami Tenshudo cathedral on January7, 1946. Photo by AIHARA,Hidetsugu. (1909-). Image is public domain.

In his address, Pope Francis warned that the world is at greater risk than ever before from the threat of nuclear weapons:

There is a need to break down the climate of distrust that risks leading to a dismantling of the international arms control framework. We are witnessing an erosion of multilateralism which is all the more serious in light of the growth of new forms of military technology.

The Pope's visit to Nagasaki highlighted the human experience of nuclear war, and included an effort to find a boy who was famously photographed carrying his dead brother to be cremated in the days following the bombing of the city:

However, Nagasaki has a deeper connection with Pope Francis and the Catholic church. The city and its surrounding region was the first point of contact between Japan and European traders, with Portuguese merchants arriving in the area in 1543. Jesuit missionaries — Pope Francis is also a member of the Society of Jesus, or Jesuits — arrived just a few years later to proselytize and convert Japanese people to Christianity.

This period in Japanese history is receiving new attention thanks to new books and an upcoming movie starring Black Panther star Chadwick Boseman as Yasuke, the first African samurai in Japan. 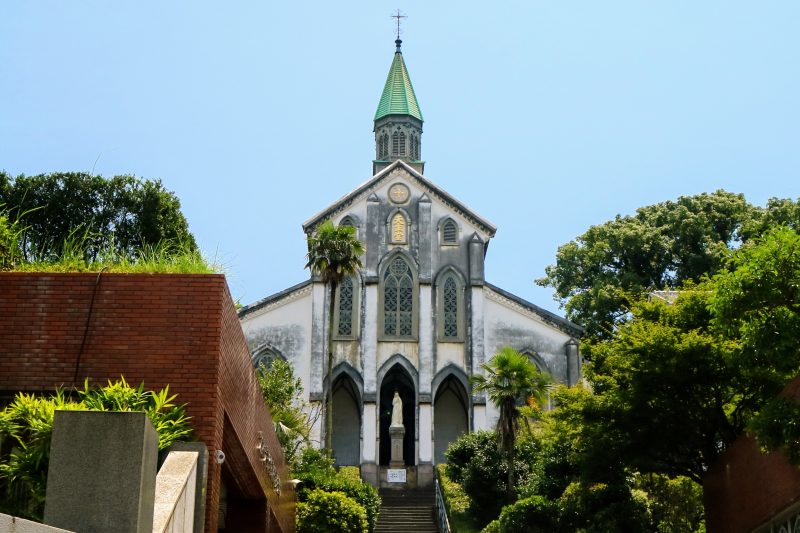 Ōura Church (大浦天主堂), also known as the Basilica of the Twenty-Six Holy Martyrs of Japan, in Nagasaki. Photo by Nevin Thompson.

The Jesuits and other Catholic missionaries were successful in converting hundreds of thousands of local peasants, townspeople, warriors and aristocrats. As a result, Nagasaki is home to Japan's largest remaining Christian community, and many churches and cathedrals still dot the landscape around the region. 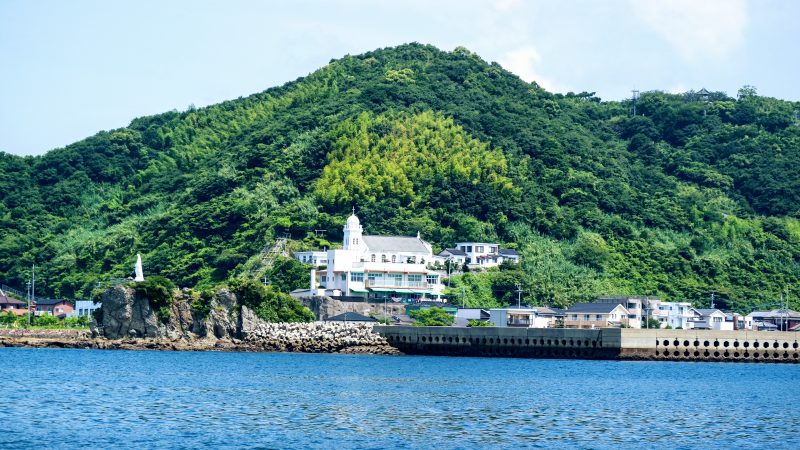 Kaminoshima Catholic Church (カトリック神ノ島教会), near the city of Nagasaki. Photo by Nevin Thompson.

For Pope Francis and other Roman Catholics, however, Nagasaki is more than a Christian outpost in the largely non-Christian country of Japan. Nagasaki is also a symbol of martyrdom and the triumph of Christian faith. 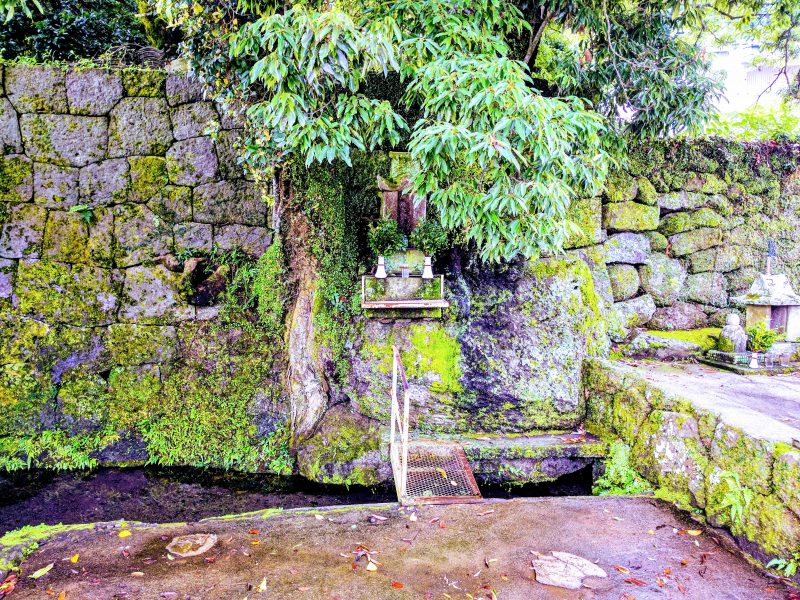 Upper River Spring (上の川湧水) in Obama, Nagasaki. The spring is said to be the final rest area for regime officials before marching Christian martyrs to the top of Mount Unzen to be crucified.

Nagasaki became the center of a sustained campaign of terror against Japanese Christians, who were tortured and crucified in nearby hot spring “hells” such as Mount Unzen.

Unzen “hell” hot springs in Nagasaki prefecture, similar to where Japanese Christians were tormented and crucified in years past. Photo by Nevin Thompson.

The “hidden Christians” of Kyushu still managed to preserve and pass on their faith, which lives on in Nagasaki and the rest of Kyushu today.

For hundreds of years, the Hidden Christians passed on their faith in secret in the remote islands and mountains of Kyushu. “Oratios” (オラショ, from the original Latin, for prayers, etc.) passed on in secret in the region have, along with Portuguese, Dutch and Spanish words first introduced from so long ago, become integral parts of Kyushu dialect.

Nagasaki is still identified as Japan's most Christian city, making for a brisk trade in Catholic-themed souvenirs. 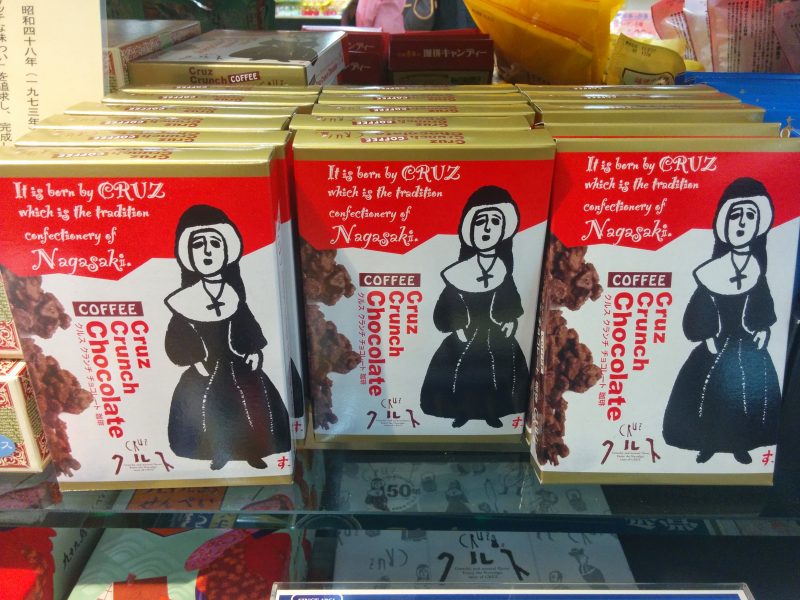 Souvenir “CRUZ Crunch Chocolate” from Nagasaki, a “miraculous sweet that combines both exoticism and local flavors.” Photo by Nevin Thompson.

Following his visit to Nagasaki, Pope Francis traveled on to Hiroshima, also bombed with nuclear weapons during the Second World War, and then to Tokyo, where he held a mass for 50,000 people.

The Tokyo Dome is filled with 50,000 people. When the Pope appeared he was greeted with a loud cheer!

The papal visit concluded with great opportunities to purchase kitsch.

Pope in Japan 2019 merchandise at Tokyo Dome. I don't see any “Frozen 2″ collaborations, which seems a missed opportunity. pic.twitter.com/HEktvTDViz

Pope Francis was presented with a papal-themed traditional happi-coat before his visit ended with a meeting with Japan's new Emperor Naruhito.

The opinion seems to be, the Pope looks a bit like a clerk from an electronics store. pic.twitter.com/TbeDEjZWIn