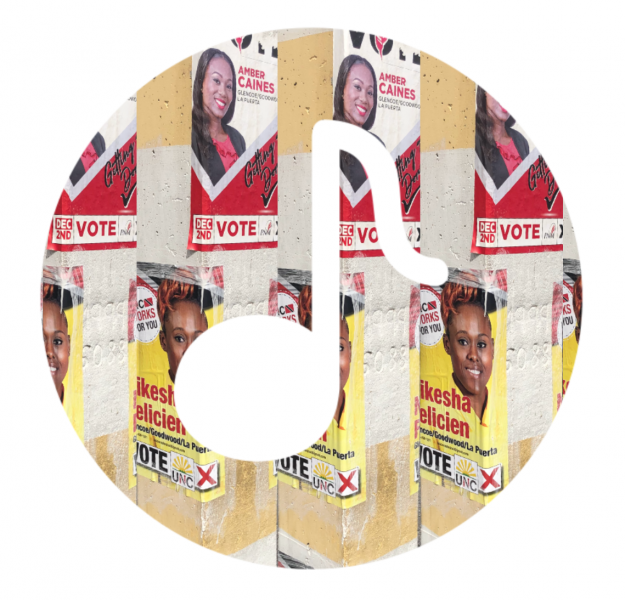 To paraphrase the calypsonian [2] Bally, in Trinidad and Tobago “it is party time once again across the land [3].” On December 2, 2019, Trinidad and Tobago will hold its local government elections [4], in which candidates from four political parties will contest as many as 139 electoral districts across 14 municipal corporation electoral areas.

Over the last several weeks, the nation has been bombarded with political messages on TV, radio and social media, posters plastered in public spaces, pamphlets stuffed in mailboxes, and in mass rallies. And massive mobile sound systems adorned in party colours have been roving around blaring soca music and soliciting support during neighbourhood canvassing exercises.

In Trinidad and Tobago, party politics and popular music have a long and sometimes uneasy relationship [5]. In the decades leading up to independence in 1962, calypsonians played an important role in documenting and resisting colonial policy. Just prior to and after independence, “loyalist” calypsonians such as the Mighty Sparrow and Duke helped legitimise the fledgling political movement led by Dr. Eric Williams in the minds of the party’s urban, Afro-Trinidadian base, with figures such as the Mighty Chalkdust making a career in later years of chronicling the government’s shortcomings.

The thrust and parry continues to this day, with party loyalists facing off against establishment critics in the annual calypso monarch competition, and chutney [6] performers injecting the East Indian point of view into the national mix.

Soca, calypso’s more upbeat successor, may appear on the surface to be less politicised than calypso, but the genre and its practitioners have also been quite amenable to political use. Soca songs are frequently repurposed to convey political party messages [7], and singers strike lucrative deals with political parties to compose campaign songs and perform at rallies. For the East Indian political parties, calypso and soca have also offered a means of identifying with the culture and concerns of Afro-Trinidadian voters.

Here are a few notable appearances of calypso and soca in Trinidad and Tobago election campaigns over the years:

Up until 1986, no political party in independent Trinidad and Tobago had succeeded in unseating the People’s National Movement [8] (PNM), which had been in power since 1962. That year, the National Alliance for Reconstruction [9] (NAR), an assemblage of political veterans and newcomers, rode an economic recession and the growing mood of discontent in the country to victory [10] over a PNM debilitated by the 1981 death of its revered leader, Eric Williams [11].

The NAR rode to victory to the rhythms of two calypsos: Déplé’s “Vote Dem Out [12]”, commissioned specially for the occasion, and Gypsy’s “The Sinking Ship” [13], a hit from that year’s carnival season.

The message of “Vote Dem Out” was clear:

“The Sinking Ship” was marginally more subtle, using the metaphor of a ship foundering at sea:

Captain, the ship is sinking/Captain, the seas are rough/We gas tank almost empty/We oil pressure reading low/Shall we abandon ship, or shall we stay on it?

Calypsonian Bally would chronicle the 1986 election season for the 1987 carnival in the classic “Party Time Again [3]”, which likened election campaigns to parties of the reveling kind:

By 1999, Trinidad and Tobago had experienced an attempted coup d’etat and two changes of government. The United National Congress [14], the leading Indo-Trinidadian party, was in power under Prime Minister Basdeo Panday [15], the party's founder, after having formed a coalition with the NAR following the 1995 general election [16].

For the 1999 local government elections, both the UNC and the PNM (then the country's opposition party) co-opted existing songs and repurposed their messages for use on the campaign trail.

The PNM chose Kurt Allen’s high-energy “Stampede (Dus’ Dem [17])”, which had been a huge hit during that year’s carnival season. The song's rather odd imagery urged listeners to chase away a swarm of bees by waving a rag (handkerchief) and dancing with reckless abandon. It was clear who voters were supposed to chase away by waving their PNM-branded bandanas.

The UNC selected David Rudder’s more earnest mid-tempo calypso “The Ganges and the Nile [18]”, also a hit from that year's carnival season. The song’s lyrics described Trinidad as a fragile but ultimately successful amalgamation of Indian and African influences symbolised by the two great rivers of the title:

The UNC had been less tolerant than previous administrations of the barbs fired at them by calypsonians, and in 2000 proposed to amend the Equal Opportunity Bill [19] by adding a clause that many believed were designed to suppress free speech among calypsonians.

For the 2000 general election, the UNC would commission two calypsonians [7], Gregory “GB” Ballantyne, and M’Ba, to compose new songs for their campaign. GB’s “Double or Nothing”, chronicled the UNC’s achievements during their term in office, and M’Ba’s “Put We Back” exhorted listeners to vote the party back for a second term.

Neither song has stood the test of time, and both singers were branded traitors by some of the Afro-Trinidadian peers. The UNC would win that election [20], but within a year the country would find itself back at the polls, voting in an election [21] which resulted in a tie between the UNC and the PNM, and which ended up being settled in the latter's favour by President A. N. R. Robinson.

In 2010, the leader of the then incumbent PNM, Patrick Manning, famously misread the mood of the public and called an early election [22] and ended up being roundly defeated by the UNC.

During the campaign season, the popular calypsonian Crazy [23] joined the UNC on the hustings to perform “Patrick Manning Have To Go [23]” with lyrics allegedly written by Jack Warner [24], the controversial [25] former FIFA vice president who was then the party's chairman. Warner is glowingly referenced in the song, along with UNC leader Kamla Persad-Bissessar.

The PNM shot back with “Manning Going Back [26]” performed by Terri Lyons, which listed the accomplishments of the Manning administration. But it wasn't enough to turn the tide in the face of growing discontent with the PNM, and, as was discovered later, behavioural manipulation [27] carried out on the UNC's behalf by the infamous Cambridge Analytica.

A sinking ship is perhaps the perfect opposition party metaphor, and Gypsy’s calypso, first used during the 1986 general elections, has proven to be exceptionally versatile.

Gypsy [28], whose given name is Winston Peters, would enter politics in 2007, serving as a member of parliament for the UNC and a government minister under the UNC-led People’s Partnership coalition (PP) from 2010. Gypsy and the UNC would split acrimoniously [29] in 2015 after he was passed over as a candidate on that year’s election slate.

The 2015 election season would find Gypsy performing “The Sinking Ship” on behalf of the eventually victorious PNM [30], taking a dig at Prime Minister Kamla Persad-Bissessar with the addition of the lyric “Kamla, the ship is sinking”.

Gypsy also appeared on stage [31] that season at a rally for Jack Warner’s short-lived Independent Liberal Party [32], where he performed a chutney-flavoured song he had written about Persad-Bissessar called “Neemakharam [33]”, a version of the Hindi word namakharam, or ungrateful.

“The Sinking Ship” has since been repurposed again, in a new recording by Gypsy [34] for the United Workers Party 2016 election campaign in St. Lucia.