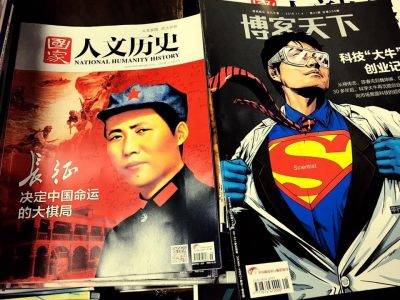 Since Xi Jinping established himself as the undisputed leader of China in 2013, the role of global media in reshaping the image of China has become one of the top priorities for the Chinese government. Today, Beijing's efforts have managed to attract a number of journalists and media outlets across the globe who are often motivated by financial incentives and/or ideological sympathies. As a result, they agree to censor content critical of the Chinese government and to promote Beijing’s global initiatives such as the One Belt, One Road project. The latest evidence came out recently as a Chinese agent who defected to Australia revealed the depth of Chinese infiltration of media, government and cultural circles in a number of countries.

Various international organizations are now extensively monitoring Chinese influence through media, such as Prague-based Sinopsis, or Paris-based Reporters Sans Frontières (RSF) which published a report called China’s Pursuit of a New Media World Order in March 2019 that describes Beijing’s efforts in this regard.

I spoke to Cédric Alviani, RSF East Asia and Taipei Bureau Director, to map the scale of Chinese influence, and to find out to what extent media professionals and public opinions are aware of this phenomenon.

Filip Noubel: In its report, RSF traces back the origin of Beijing’s claim to a new media world order to the concept of cultural relativism. Could you explain?

Cédric Alviani: The doctrine of cultural relativism claims that each nation has the sovereign right to define its own criteria with regard to freedoms and human rights. RSF strongly opposes this unacceptable position since it diametrically contradicts the universality of human rights as stated in the Universal Declaration of Human Rights. Cultural relativism allows China to release a week before the 70th anniversary celebrations of the People's Republic of China a white paper concluding that it has become a true democracy and a champion of human rights, two domains for which it has been regularly criticised for by the global community.

FN: What are the various mechanisms Beijing uses to advance its agenda of co-opting media outlets and journalists around the world? Could you give a telling example?

CA: RSF have identified at least six methods that Beijing utilizes to co-opt media outlets and journalists around the world. Those are: 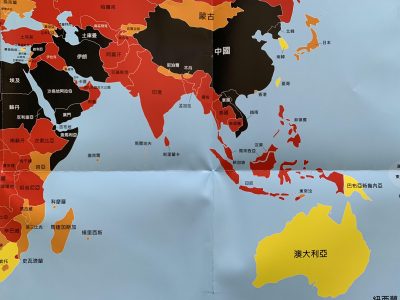 Map of Reporters without Borders showing high levels of press freedom (in yellow) and low levels (in black). Photo by Filip Noubel, used with permission.

FN: You describe disinformation as a form of ‘sharp power’ used extensively by Beijing. Could you explain the concept, and how it is being implemented in this context of Taiwan?

CA: Besides its soft power, China also makes excessive use of its “sharp power” through a set of aggressive practices that include disinformation and harassment. In August 2018, a rumour began circulating that Taiwanese could no longer use their passports to travel abroad, and that the European Union had revised its visa-free policy for them. On September 4, 2018, when a powerful typhoon forced Japan to close Kansai International Airport for two days, reports circulated that Taiwanese travelers trapped inside had been abandoned by their representative office and instead were rescued by the Chinese embassy. In Taiwan, the news sparked an online rage against diplomat Su Chii-cherng, 61, who served as Taiwan’s representative in Osaka. He committed suicide 10 days later. The original report was then found to be “fake news” coming from China.

FN: Can you explain what the Belt and Road News alliance is? What is the purpose of training programs for non-Chinese journalists under the slogan of “Tell the China Story well (讲好中国故事)?”

CA: “Tell the China Story Well” allows Beijing to shape the global narrative in its favor: for example, by referring to the “fight against terrorism” in Xinjiang rather than the persecution of Xinjiang’s Uighur community. The Belt and Road News alliance (一帶一路新聞合作聯盟) led by the Xinhua news agency, TV broadcaster CGTN and China Radio International which groups 72 media in 42 countries train journalists in “language elements” specific to the project – in other words, to get journalists in the countries involved in the project to “speak the same language” as used in China.

FN: One of Beijing’s most effective tools seems to be money: Why are non-Chinese media outlets so eager to accept Chinese investment?

CA: The reason is the lack of alternative sources of financing in the context of digital transformation. From a financial perspective, it is understandable that the offer for additional funding and advertising is alluring. RSF however, would insist that receiving funding from a regime that openly threatens press freedom worldwide is not recommendable, as it will foster financial dependence and jeopardize journalism ethics.

FN: There is definitely an asymmetry at play: while the Chinese government severely restricts foreign media in China, it benefits from the freedom of speech guaranteed in most democratic countries. Are there effective methods to make Chinese infiltration of international media more visible and better map Beijing’s new media world order?

CA: It has taken a long time but democracies are finally realising the danger they are running by giving Beijing free rein to gradually take control of their media and thereby extend its influence over public opinion. Some methods that RSF recommends includes, but are not limited to: