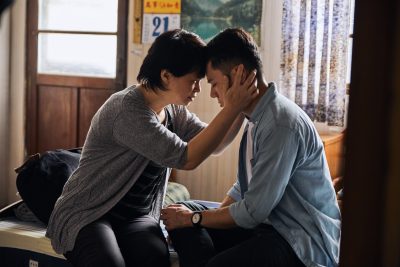 A scene from the movie The Teacher featuring the main character Kevin and his mother. Photo provided by Swallow wings films, used with permission.

A recently released and already awarded Taiwanese movie tests the limits of acceptance of LGBT people as the country became the first in Asia to pass a marriage-equality law in May 2019.

The Teacher (我的靈魂是愛做的) is a feature movie by Taiwanese Ming Lang Chen who just won an award in November at the 2019 Golden Horse Festival, the largest and oldest film festival in the Chinese-speaking world. It tells the story of a young gay school teacher who is confronted by his family, colleagues, and lover as he struggles to make his gender identity transparent and accepted by the people around him. The movie will be officially released on December 6 and is the second feature film by Chen who was born in Taiwan in 1970, served as Lieutenant in the Taiwanese army before migrating to New York where he completed his studies at New York University's Film Department. His first feature film, Tomorrow Comes Today (你的今天和我的明天), came out in 2013 and tells the story of a Taiwanese migrant in New York who is exploring his own masculinity.

Chen spends most of his time in New York but travels regularly to Taiwan. Chen agreed to an interview as he tours Taiwan for the premiere of The Teacher.

Filip Noubel: What inspired you to make the movie The Teacher（我的靈魂是愛做的）？

Ming Lang Chen: My initial idea was to make a movie about a gay couple in which one is HIV positive, and the other isn't. Eventually, the story evolved, and I decided to make the movie in Taiwan. The main plot follows Kevin, a 26-year-old high school teacher who teaches civic education in Taiwan. He falls in love with another man, and discovers two things about him later: That this man is married to a woman and that he is HIV positive. Kevin is thus faced with a number of challenges: He has to face his own mother with whom he still lives and with whom he talks about the man he loves; then there is the fear of AIDS, and finally he also needs to face his lover's wife. On top of that, someone spreads a rumor at his school that he is HIV positive. The school then tries to force him to resign, as it is illegal to fire someone based on their HIV status in Taiwan. So the main theme is really how one faces pressure at a rather young age. The Teacher is about human communication, it shows a wide range of delicate emotions, I wouldn't say it is just a gay movie.

FN: Why do you think your movie won an award at the 2019 Gold Horse Award?

MLC: Taiwan is very friendly towards LGBT film production. Every year the the Golden Horse Award, which started in 1962, has at least one or two LGBT-themed movies competing for an award. In 1993, the gay-themed movie Wedding Banquet by Taiwanese and now global filmmaker Ang Lee won the award for best feature film. In 2003, a serial adaptation of Crystal Boys (孽子), inspired the groundbreaking gay novel of the same name by Taiwanese gay author Pai Hsien-yung  (白先勇) won the Golden Bell Awards.

As for Winnie Chang, who plays the wife in my film, I believe she won the Best Supporting Actress Award because, even though there are very few scenes involving her, she represents the many layers of this typical situation when gay men marry women out of social and family pressure. She finds herself in a love triangle that was not her choice and is exposed to a lot of pressure. She married into a big family, has to keep up appearances, wants a child and is pressured by her in-laws to do so. Yet she remains tolerant and humane. 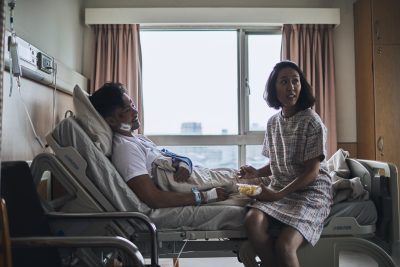 A scene from the movie The Teacher featuring Winnie Chang, who won Best Supporting Actress at the Golden Horse Awards.  Photo provided by Swallow wings films, used with permission.

FN: Taiwan is often described as an oasis for LGBT rights in East Asia. Is this true and does it apply to all parts of Taiwanese society?

MLC:  In the capital Taipei, we live in a very open space, we have a large Gay Pride Parade, and so we tend to think that being gay is no big deal. But we need to get outside of this bubble and see what is really happening in society. Because yes, Taiwan is a democracy, but a very young one, just in its early 30s. This is why I chose a main character who is just under 30. I wanted to see what this generation is experiencing, as they are the first to grow in a post-martial law society.

This is why the movie will be distributed across Taiwan in 16 commercial movie theaters. We didn't want to go big and end up with half-empty movie theater rooms. This is an art movie, quite different from Taiwanese mainstream movies that are heavily influenced by the storytelling of TV series. Our hope is that word of mouth will convince audiences who are into indie movies to come and appreciate The Teacher. 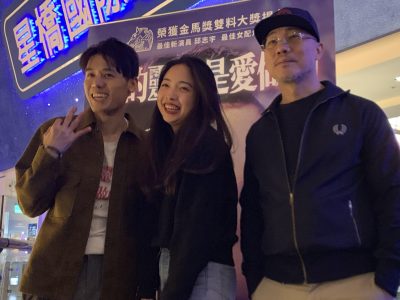 Filmmaker Ming Lang Chen (on the right) at the premiere of The Teacher in Taoyuan, with a fan and the main actor Oscar Chiu (邱志宇) (on the left). Photo by Filip Noubel, used with permission.

FN: Who then is opposing LGBT rights in Taiwan today?

MLC: The strongest opposition comes from certain members of religious groups, and mostly Christian people. They have money, are influenced by groups outside of Taiwan, and have a blind belief that homosexuality is wrong, even though the Bible doesn't say that. But there is also another factor: our Asian traditions that keep any talk about homosexuality hush hush. The result is that very few people come out, so people don’t get to see or know a gay person in their immediate circles.That's what I wanted to achieve with Kevin; to introduce a person who looks like a neighbour so people can look at his dilemma and say: “I know him!”.

I couldn't imagine that I would see marriage-equality happen in Taiwan, and we have to thank people like Chi Chia-wei who were brave enough to come out publicly. I never felt prouder to be a Taiwanese than the day we passed the marriage equality law.