The draconian bill will legalize internet shutdowns in Nigeria 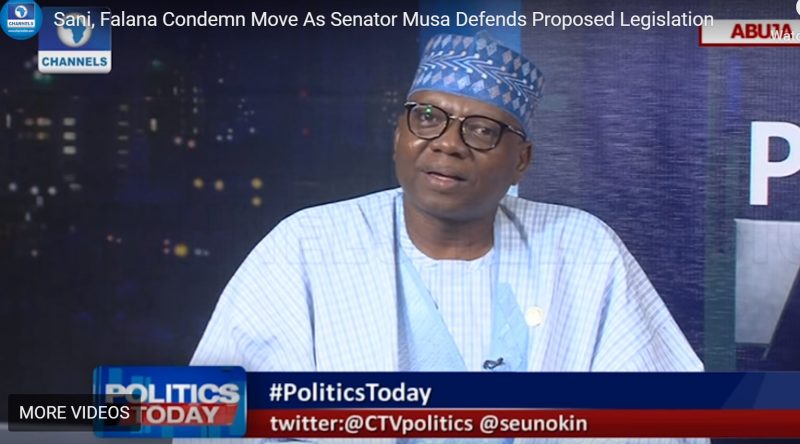 Senator Mohammed Sani Musa is the sponsor of the social media bill. Screenshot from Channel Television You Tube video.

On November 20, the Protection from Internet Falsehoods and Manipulation of other Related Matters Bill 2019, known as the “social media bill,” sponsored by Senator Mohammed Sani Musa, sailed through a second reading.

The social media bill aims to curb online falsehoods and mis- and disinformation. However, the real intent is not regulation, but rather, the annihilation of online freedom of expression, criminalization of government criticism and legalization of internet shutdowns in Nigeria.

A similar bill was beaten dead in its track in 2016.

Any form of government criticism is a crime

This bill aims to “[prevent] the transmission of false statements or declaration of facts in Nigeria,” according to Section 1a. It will ban the dissemination statements likely to be ”prejudicial” to Nigeria, including subjects like public health, public safety, ”public tranquility or public finances” and Nigeria's ”friendly relations with other countries.”

The bill will also “detect, control and safeguard against coordinated misuse of online accounts and bots,” according to Section 1c. In other words, everything is permissible to monitor and control in the proposed law — under the guise of fighting false information.

The social media bill is omniscient since it will be binding for every Nigerian citizen, regardless of residence or geographic location, as long as the ambiguous “false statement of fact” is transmitted within the country. Section 3a to b(i) of the social media bill states that:

A person must not do any act in or outside Nigeria in order to transmit in Nigeria a statement knowing or having reasons to believe that it is a false statements of fact; and the transmission of the statement in Nigeria is likely to be, prejudicial to the security of Nigeria or any part of Nigeria.

The nebulous “national security” excuse is used to justify the trumping of free expression. But it does not stop there, the Nigerian government is always right and cannot be criticized. According to Section 3b(vi), any statement that diminishes “public confidence in the performance of any duty or function of, in the exercise of any power of the government” is prohibited.

According to Section 3b(v), this applies to any statement that: “incites feelings of enmity, hatred, directed at persons or ill-will between different groups of persons.” This is dangerous because it leaves regulators open to contradictory interpretations that could be abused by political actors.

Who defines and approves what incites feelings of hatred? It means that seeking transparency or even daring to hold a politician accountable could be declared hateful.

The punishment upon conviction for any provisions of the bill is a fine that ranges between 200,000 and 10 million naira [about $556 to $28,000 United States dollars], imprisonment for a term not exceeding three years or both.

The social media bill also grants the government unlimited power to switch off the internet, through the “Access Blocking Order” as contained in Section 12, number 3:

The Law Enforcement Department may direct the NCC [Nigerian Communications Commission – the regulatory agency for the telecommunication industry] to order the internet access service provider to take reasonable steps to disable access by end-users in Nigeria.

Internet service providers must comply with this blocking order or risk upon conviction a fine within the range of 5 to 10 million naira [$14,000-28,000 USD].

In addition, the bill under consideration indemnifies the internet service providers from any “civil or criminal liability” incurred from a lawsuit brought against them for “complying to any access blocking order,” according to section 12, number 5.

The human rights violations get murkier because the law grants the police a legal license to command an access-blocking order at whim. Section 15a states that only the “initiative” of the police in face of “overwhelming sufficing evidence” is needed to cancel an internet shutdown in the country.

Consequently, “no appeal may be made to the High Court” [Section 13(2)] by any party to revoke such a ban without first applying to the police to revoke an existing blocking order. The implications of this are obvious — no one can resort to the courts for redress in the face of this violation while the blocking order persists.

The lawmakers behind the social media bill

Three lawmakers seem to be the arrowhead of the bill in the Senate, the upper house of Nigeria’s parliament: Mohammed Sani Musa (the sponsor of the bill), Abba Moro and Elisha Abbo.

Out of the four senators pushing for the Social Media Bill, 3 of them are first timers:

1. Mo Sani: Was outed on social media for being an APC member while allegedly handling card reader contracts in 2015 elections.#NoToSocialMediaBill pic.twitter.com/QWSoD0bEtL

Mohammed Sani Musa’s company, Activate Technologies Limited, supplied the Permanent Voter Cards (PVCs) machine used for the 2019 general elections, while he was the candidate of the ruling All Progressives Congress (APC) for Niger East Senatorial district, according to the investigate outlet, Premium Times. This is an allegation that the Independent National Electoral Commission (INEC) admitted. Musa’s conflict of interest raised some doubts about the true independence of Nigeria’s election umpire in the last election. 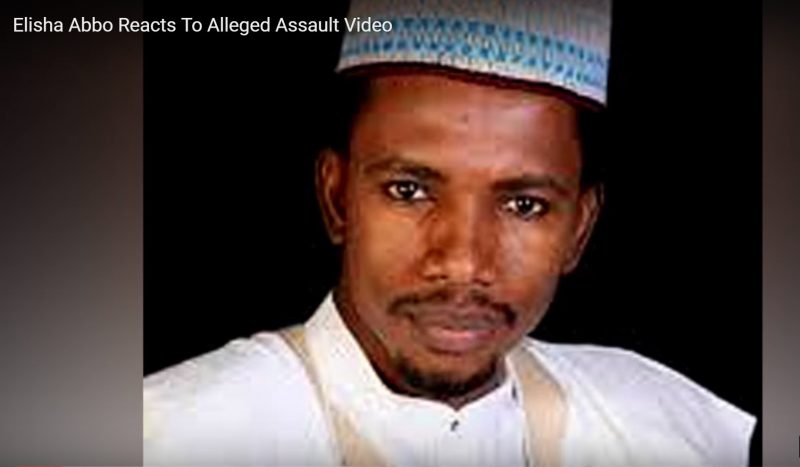 Ishaku Elisha Abbo of the opposition People’s Democratic Party (PDP) is a senator representing the Adamawa North Senatorial District in Adamawa State, in northeast Nigerian. In July 2019, in the presence of a police officer, Abbo assaulted a female staff member in an adult sex toy store in Abuja. After a video of the assault went viral on social media, Abbo offered a public apology.

Abba Moro, also with the PDP, is the senator representing Benue South district, northcentral Nigeria. On March 15, 2014, Moro, as minister of interior, was responsible for the Nigerian Immigration Recruitment tragedy in which about 6 million Nigerian youths who applied for 4,000 vacant positions in Nigerian Immigration Service were forced to assemble in various recruitment locations in the country.

The resulting stampede due to overcrowding led to about 20 deaths and multiple injuries. Moro was a recipient of part of the application fees paid by the job-seekers amounting to 675 million naira [about $1.8 million USD]. Moro not only enriched himself but also bypassed the extant procurement laws for the Immigration Service.

‘No need for silence, fear or self-pity’ – #SayNoToSocialMediaBill!

It's a grievous infringement on the Constitutional right to free speech. We must be able to speak our minds, even when we are wrong or mistaken, without fear of intimidation, harassment or incarceration by the State.

The National Assembly of the Federal Republic of Nigeria: Stop the Social Media Bill!!!

Others Nigerians are reaching out to their lawmakers to vote against the bill.

i wrote an email to the senators representing my state about the social media bill telling them to vote it down. you should too.

However, very few lawmakers, like Chimaroke Nnamani, stood against the bill when it was tendered in parliament for the second reading.

In a statement, Amnesty International condemned the use of “laws to justify human rights violations” because it will not only stop Nigerians “from speaking their minds” but will also “send them to jail for doing so.”

The parliament, under the pretext of curbing mis- and disinformation, is considering the enactment of a draconian law. Ironically, the greatest propagators of false information online are political actors.

Both Nigeria's ruling and main opposition parties turned Twitter into a minefield of ethnic hate speech, disinformation and propaganda during the 2019 presidential elections.

In these troubling times of freedom of expression in Nigeria, the wise charge from American writer Toni Morrison evokes hope:

This is precisely the time when artists go to work. There is no time for despair, no place for self-pity, no need for silence, no room for fear. We speak, we write, we do language.

The bill is currently at its second reading in the Senate. To become law, it will need to move to committee stage where legislators will review it. The committee presents its report to Parliament, the bill is debated, a clean copy is re-presented to the Senate for a final vote and then, there's the presidential assent.

The Parliament must be hard-pressed to throw out the social media bill in its entirety. This is because Africa’s most populous country will slide smoothly into full dictatorship once freedom of expression has been extinguished.