In Hong Kong, landslide victory for Pro-democracy camp in local elections means Beijing is out of touch

Will Beijing see reality and alter its HK policy? 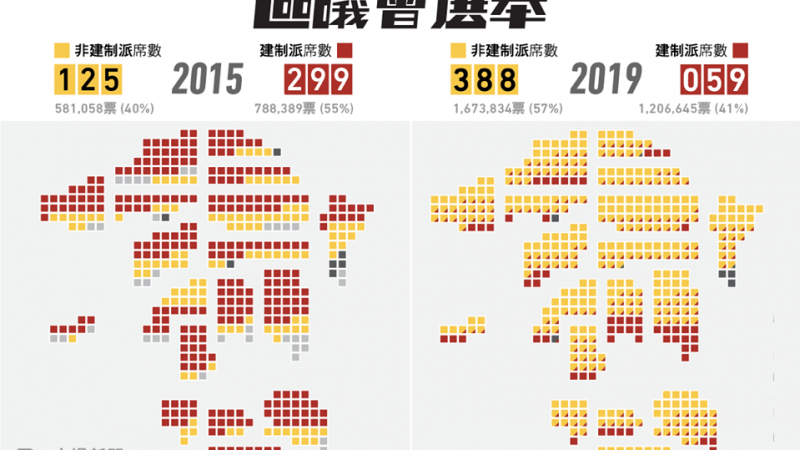 The Pro-democracy camp has won a landslide victory in district council elections on November 24. Out of the 452 small district seats, the Democrats have taken 388 seats — 263 seats more than the previous election in 2015. The pro-establishment party has lost 240 seats and only retained 59 seats.

If the voting rate were below 65 percent, the pan-democrats could have lost in many districts as the pro-establishment’s iron votes were more evenly distributed in all districts. With the current 70 percent voting rate, the gap between the number of votes received by the two camps widened to 6 percent (469,189 votes) and helped the pan-democrats win in competitive districts. The small district, single vote and single-seat election system, which is all favorable to big and resourceful pro-establishment political parties, has led to the utmost defeat of the pro-establishment. (Check more on the background of Hong Kong's District Council Elections)

A de-facto referendum on the protests

The elections are considered a de-facto referendum on Hong Kong protests and a majority of the voters have shown their support for the anti-government protests despite the chaos and destruction that has taken place.

In fact, about half of the pro-democracy candidates who won the elections are independent or new to elections. They don’t have track records in serving the community nor organization resources for their election campaigns. The reason why they won is mainly that they have endorsed the agenda of anti-government protests, including investigation on police misconduct and brutality, remove riot label on the protests, drop charges against protesters and democratic political reform.

Beijing was allegedly shocked by the result of the elections. A senior editor of Foreign Policy was told that the Chinese communist mouthpieces had prepared a front page victory story for the Hong Kong pro-establishment:

How Chinese media – and probably the leadership – became so convinced of a Beijing victory in Hong Kong's elections they wrote the story in advance.https://t.co/2tEFXVxLG8

The pro-establishment camp had been pressuring the government to delay the elections since September. On November 8, they even put up front-page political advisement on major newspapers urging the government to call off the elections. However, a week later, after protesters started disrupting traffic to create a general strike, Beijing decided to hold the elections on schedule as it was believed that they could swing the public opinion in their favor.

On November 14, ten days ahead of the elections, the city was flooded with political advertisements calling citizens to use their vote to say “NO” to violent protests. A large number of local pop-stars were mobilized to spread the message on “voting down violence”. On November 16, soldiers of the People's Liberation Army marched out of their barracks to clear barricades in the streets. Pro-establishment groups also organized their supporters to clean up the streets as part of their election campaigns.

Beijing was confident that the pro-establishment could win the district council elections as they had not lost since 1999. They believed that a majority of people could not withstand the radical protesting strategy and would want to restore social order to Hong Kong as soon as possible.

While it is true that people want to restore order, many feel that the disorder was created by the government in the first place. For six months, no one in the authority's camp has been punished for the chaos while about 4,500 protesters have been arrested and are facing riot charges with the potential to receive a maximum 10-year jail sentence.

In districts where residents have witnessed the violence of the pro-Beijing white clads and riot police officers’ abusive use of tear gas, rubber bullets and even live rounds, the “silent majority” decided to stand up and voice their support for the protesters.

Beijing gets Hong Kong all wrong

The election result let Beijing know that its judgment about Hong Kong is all wrong. Since the anti-extradition protests, Beijing's strategy in Hong Kong has turned a single-issue protest into a political crisis that questions China’s fundamental policy on Hong Kong. Here are some of the ways that Beijing has underestimated and misjudged the current political climate in Hong Kong:

1. Beijing believed and claimed that the anti-extradition protests were staged by pro-democracy politicians who work with foreign forces;

2. Beijing believed that the Hong Kong government could simply neglect one million people’s demands as the pro-establishment political parties have dominated the Legislative Council;

3. Beijing believed that the police and pro-Beijing mobs could work together to crush the protests in a manner similar to the cracking down of 2014 pro-democracy Occupy Central protests;

4. Beijing believed that radical protesters are a small minority and the riot police officers could crush and arrest them all;

5. Beijing believed that the demand for an investigation on police brutality was a political plot against Hong Kong and the Beijing government and hence unacceptable;

6. Beijing believed that the majority of Hong Kong people only care about their personal well-being and would not support disruptive protests;

7. Beijing believed that the anti-mask law and the emergency act could terrorize the masses and keep them away from protests;

9. Beijing believed that the pro-establishment camp could never lose the district council elections.

All of the above have been proven wrong. But will Beijing see the truth and alter its Hong Kong policy?