Will the upcoming Taiwanese presidential election bring an end to the death penalty?

Leaflet from the Taiwan Alliance to End Death Penalty calling for the abolition of capital punishment in Chinese and English. Photo by Filip Noubel, used with permission.

Despite being recognized as the third most advanced democracy in Asia, Taiwan still maintains the death penalty. On the surface, there seems to be a general consensus on the issue: 85 percent of Taiwanese support it according to recurrent polls. Yet some activists believe the time has come to revisit the issue of capital punishment, particularly as the island gears up for presidential elections in January 2020.

Worldwide, the death penalty has been abolished in over 100 countries as it is considered a major violation of human rights. In East Asia, allowing capital punishment is the rule and not the exception: Mongolia abolished it in 2016, preceded only by Macao in 1976 and Hong Kong in 1993; all other countries apply it, including China where thousands of people are sentenced every year.

In Taiwan, the death penalty was introduced when the island was under Japanese rule (1895-1945). When the Kuomintang sought refuge from mainland China in 1945 and resumed state control over the island, it maintained capital punishment. To this day, executions are carried out with the inmate sedated and shot in the back as he or she lies down on a mattress.

The death penalty is applicable to serious crimes, such as treason, espionage, murder, or rape. The number of executions has been consistently going down from about 50 to 70 a year leading up to the early 1990s, to around 5 per year on average since 2000.

If crime rates in Taiwan are among the lowest in the world, why then are people in Taiwan overwhelmingly in favor of capital punishment?  Lin Hsinyi, a long time anti-capital punishment campaigner who heads the Taiwan Alliance to End the Death Penalty (廢除死刑推動聯盟) and also works with former death row inmates, believes one of the reasons is that people lack the will to challenge existing norms:

Taiwanese people are used to accept existing situations, they won’t necessarily spend time overthinking the matter to assess if it is correct or not. Traditional views do play a role here, for example the notion that ‘if you kill someone, you have to pay with your life’. But I think the real issue is that we haven’t processed one question enough: Is it because something exists that it is therefore right? People in Taiwan are very much inclined to obey government rules. Of course there have been cases of miscarriage of justice, but the broad public wouldn’t know about those.

In an effort to change the norms, the Taiwan Alliance to End the Death Penalty (TAEDP) has worked with government structures and researchers to frame the issue in a more nuanced way that goes beyond the idea of just “being for or against” capital punishment. The results of a 2013-2014 questionnaire, which included over 100 questions and polled 2,000 people indicated that people's positions are not as entrenched as they would appear.  Lin Hsinyi explains:

If you ask people about cases of miscarriage of justice, then they are not in favor of death penalty, thus the support for capital punishment is not at all based on rational thinking. We did a very interesting thing, we divided the questionnaire into type A and B. In questionnaire A, we put the question ‘do you support the death penalty or not?’ at the top, while in questionnaire B this question appeared at the very end. We discovered that if people spend time to think over it, only 82 percent of the respondents would support death penalty, while if you ask at the beginning, the rate in favor is 88 percent. There is a gap of about 6 percent. This shows that a difference of 15 minutes of time is enough to create such a change in opinions. If we provide more information, if we educate the public, we can certainly change perceptions.

The reintegration of former death row inmates who have been freed once a judiciary error has been recognized by the state is an important part of the work Lin Hsi-yi and her organization undertake. As she explains:

The government will compensate from 1,000 to 5,000 Taiwanese dollars per day [about US$ 32 to 160 for every day spent in prison]. But before they find an NGO to help, they have to pay for their own lawyers, their family members have to support them and cannot go to work, so once they receive the compensation, they have to return the money to their families and use up all the money very soon.

While some of the former inmates work in NGOs advocating the abolition of the death penalty, others choose manual work as part of their therapy to overcome their trauma. One of them is Cheng Hsin-tze who was wrongly accused of murdering a police officer. He spent 16 years in a prison in Taiwan, 12 of those years were spent on death row. Now, Cheng Hsin-tze grows and sells organic rice. 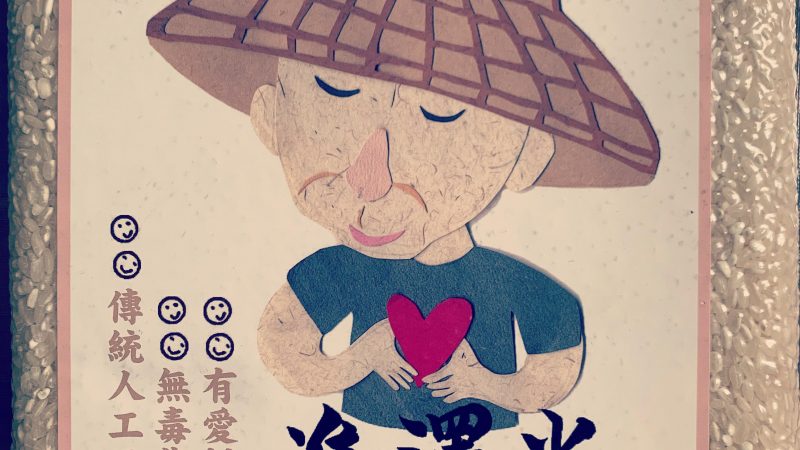 Some also become spokespersons for the abolition campaign. At a photo exhibition opened recently in Taipei, the work of artist Christophe Meireis profiled the lives of inmates and their relatives and was attended by Hsu Tzu-chiang. 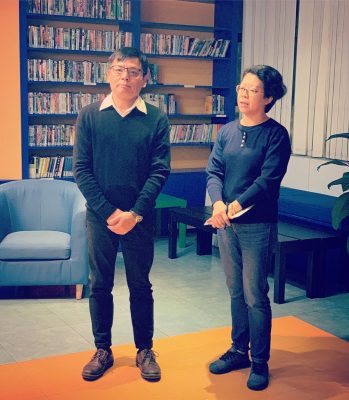 Hsu Tzu-chiang speaking at the opening of a photo exhibition of death row inmates in Taipei on November 15, 2019. His own portrait is exhibited as well with the following quote: “I don't have dreams. I just wish that there won't be another Hsu Tzu-chiang.” Photo by Filip Noubel, used with permission.

The death penalty regularly resurfaces in public discourse around election time in Taiwan. In 2000, the island experienced a major political shift as the Democratic Progressive Party (DPP) ended the 55-year long political dominance of the Kuomintang with the election of DPP President Chen Shui-bian. From then on, the issue has been instrumentalized around election time as competing parties are courting voters and want to appear as hard-liners on issues of safety. This despite the fact that in 2009, Taiwan ratified the UN International Covenant on Civil and Political Rights (ICCPR), which calls for the abolition of capital punishment. However, since it signed the agreement, Taiwan has applied the death penalty in 34 cases, both under KMT and DPP governments.

The main question now is how the winner of the January 2020 Presidential elections will consider the issue of a moratorium. As the experience of other countries show, a prolonged moratorium is the most successful way for the abolition of capital punishment, as illustrated in this region with Mongolia.