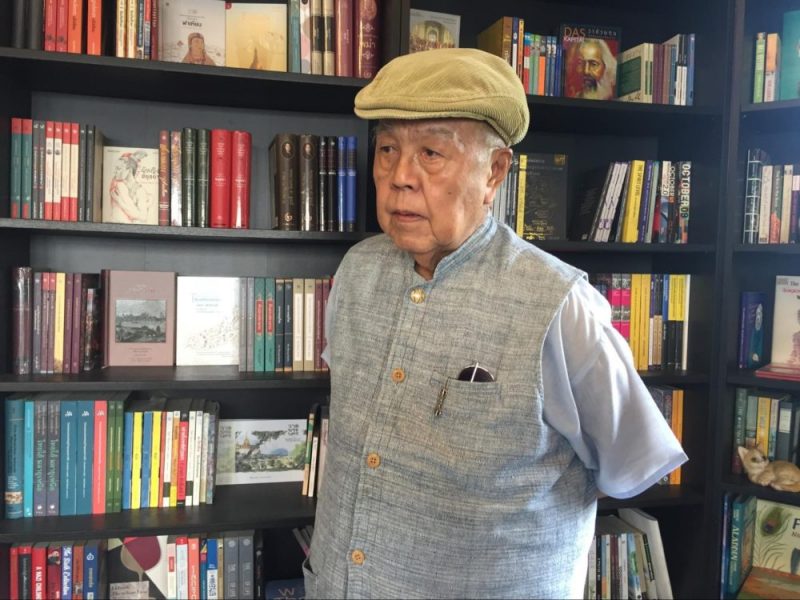 Sulak Sivaraksa at the Wild Dog Bookshop in Khon Kaen. Photo from The Isaan Record

This edited article by Hathairat Phaholtap is from The Isaan Record, an independent news site in Thailand, and is republished on Global Voices as part of a content-sharing agreement.

At 86 years of age, Sulak Sivaraksa–better known as S. Sivaraksa–is a senior academic who has been popularly dubbed the “Siamese Intellectual,” and he is no stranger to the courtroom. Throughout his career he has been compelled to answer court summonses more often than he cares to remember. In no less than six of these court cases he was answering to the charge of lèse-majesté, or royal defamation.

His most recent court case was in 2014, when he was accused of defaming King Naresuan, a monarch in the 16th century, during a debate at an academic seminar titled “The history of expunging and contriving.” In 2018, the case was withdrawn by military prosecutors.

The Isaan Record’s editor Hathairat Phaholtap sat down with S. Sivarak to talk about this case, and his views concerning the monarchy, and the country's politics.

The Isaan Record (IR): After petitioning the incumbent King Rama X and receiving a royal pardon from him, you gave interviews to the press saying that the King is compassionate. How is he compassionate?

Sulak Sivaraksa: I told His Majesty that I was being unfairly targeted, that the charge of lèse-majesté was just a pretext for silencing me, and he believed me. He instructed the royal secretariat to have the court case dropped immediately. His Majesty is very decisive. If he is going to do something, he doesn’t wait around to do it. I am very grateful indeed.

IR: You say that he is a very capable and insightful person. What are his views on democracy?

Sulak: He is very interested in the topic of democracy, that much I’m sure. But as to exactly what his views are on the subject of democracy are, I am not sure at all.

IR: Do you view Article 112, as it is currently being used, as a political tool or as a means of protecting the monarchy?

Sulak: Oh, it’s definitely not a means of protecting the monarchy! It is well and truly a political tool. The previous king stated under no uncertain terms that anyone who abuses Article 112 is, in effect, harming the King. And by doing that, they would be directly contributing to the decline of the monarchy. He was very clear about that.

IR: How will this law be used from this point onwards? You’ve said many times in the past that it needs to be overhauled. How should it be changed?

Sulak: I said that in parliament. I said that, “If you MPs had any sense, if you don’t have the courage to get rid of this law, you should at least think about amending it.” For example, they could have gotten rid of the minimum sentence of three years since that would allow the courts to suspend sentences. Another thing is to remove the obligation for the police to accept any accusation of lèse-majesté–however spurious–as prima facie. That’s just ridiculous, that they can’t refuse to arrest someone accused of lèse-majesté, even when they don’t see any reason to.

There ought to be a legal commission to decide first on whether there is really any grounds for prosecution under Article 112. This commission could be drawn from the judiciary, or from the Bureau of the Royal Household, too, for that matter. The point is that there really ought to be some serious deliberation on whether to go ahead and prosecute someone for the crime of insulting the monarchy.

IR: Do you think the monarchy should remain a fixture in Thai politics and society?

Sulak: That’s actually one of the questions His Majesty posed during my audience with him. I said to him, that for the monarchy to endure, it must make itself useful to the people. If the monarchy is wholly self-serving, well then its days are surely numbered [Sulak shakes his head]. The monarchy must introduce some transparency into its workings if it wants to remain. It must be open to criticism. That’s what I said to him, but I don’t know whether he believes I’m right or not.

IR: At the moment there’s a buzz online about young people not wanting to stand up for the King in cinemas. What are your views on this?

Sulak: Standing up for the royal anthem in cinemas and theaters, that’s a custom that we borrowed from western nations when they still did it. In the UK, they’ve stopped doing that long ago! They know that if people want to do these symbolic displays they will, but if they’re not into it then they won’t. There’s no real point to it.

The [royal] anthem is just a symbol. It’s designed to honor the monarchy and make it look great. When the people are satisfied, that is a good time to put the anthem on. But when people are dissatisfied, forcing the anthem on them is a mistake—whether it’s a song or whatever. If people are unhappy about these displays, then they have to stop. There is absolutely no good to be gained from forcing the issue.

IR: But some people still do stand up for the royal anthem—there seems to be a pretty even split. What is the way forward?

IR: What is the political significance of the monarchy?

Sulak: The monarchy has been with Thailand for around 700, 800 years now. It’s generally better to keep and improve what you already have than to destroy and start again. It’s easy to chop down a tree, but if the tree gives shade then it’s surely better to keep it than to chop it down.

Sure, the tree could have parasites living off of it. It might have creatures living in it that can make you wish the tree wasn’t there. You have to remove them, not the tree. The monarchy is the same. You have the extreme right-wingers, the people who are just hanging onto the coattails of the monarchy for their own ends, you have to get them out of the tree. A transparent monarchy that can be critically examined can last forever. It’s better to keep a tree than to chop it down.

IR: The government of General Prayut Chan-ocha, which started off as a military dictatorship, has manipulated things and got themselves into parliament. What kind of hopes do you have for this government?

Sulak: Mr. Prayut, he doesn’t know a damned thing about anything. He’s just winging it from day to day. How did we allow this kind of person to be prime minister?

He even decided to either leave out or forget certain parts of the oath when being sworn into office. This is very dangerous, because the oath is sacred, yet he doesn’t seem to give a damn. How do you deal with someone like this? The MPs have to get together and push, or kick him out, through whatever legal means they have before them.

But there are still some promising signs. There are some new parties in parliament now, a lot of people who are progressive in outlook. I think that these people will band together to stick it to Prayut. They’ll use rationality as their main weapon because that’s something that Prayut just doesn’t get.

IR: You’ve said that you’re beginning to see some hope in the younger generation in parliament. Can you see hope for democracy after the most recent election? Do you think the people have democratically awake?

Sulak: Yes, I believe that some kind of awakening is afoot, whereas the government is rudderless. The more dictatorial the government is, the more the people will awaken. I think it really is worthy of praise, the way that young Thai people are more wise to what’s going on than a lot of people from my own generation.