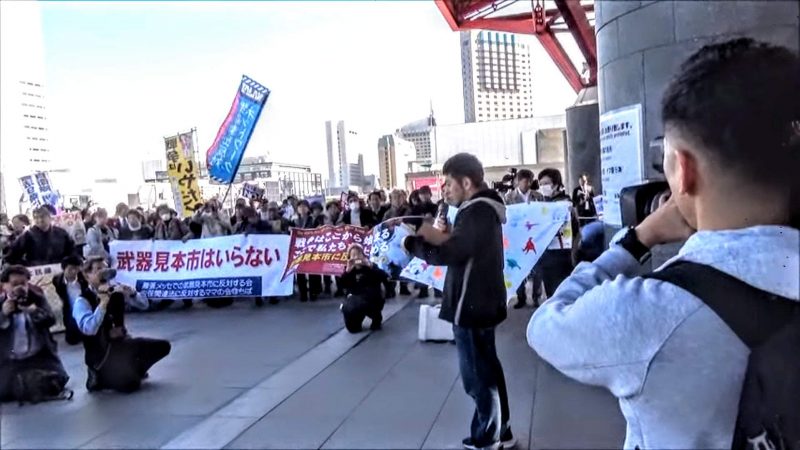 Organized by the Japanese government at the Makuhari Messe convention center in Chiba, the Defence and Security Equipment International [3] (DSEI) arms fair is part of the Japanese government's efforts to build up the country's defense industries five years [4] after it lifted a ban on arms exports. The event took place from November 18 to 20, just a week before Pope Francis historic visit [5] to Nagasaki bringing a message of peace [6] to Japan.

While small-scale arms fairs have been regularly held [7] in Japan in the past, this is the first such event organized in collaboration between government and industry. According to the Mainichi Shimbun [2]:

The nation's “first fully integrated defense event” is sponsored by ATLA (the Japanese Acquisition, Technology and Logistics Agency [8], the Ministry of Defense, the Ministry of Foreign Affairs, and the Ministry of Economy, Trade and Industry with 62 Japanese and 93 foreign firms and organizations taking part.

According to the DSEI briefing [9] about the event, the fair attracted 110 attendees from 60 companies [10] representing Japanese and European prime contractors as well as suppliers including Mitsubishi Heavy Industries, NEC, Subaru, Thales Japan, Fujitsu, and Airbus Helicopters Japan.

After the end of the Second World War in 1945, Japan restricted arms exports [11]. In 2014, based on updates made in 2013 to its National Security Strategy, Japan loosened those restrictions, citing the need for greater security integration with the United States and a desire for economic diversification [7].

The changes to the National Security Strategy were also made possible by the Abe Shinzo government's successful efforts [12] to reform Japan's Peace Constitution to make it easier for Japan to go to war.

As reported in Red Flag [the official newspaper of the Japanese Communist Party], in the official guidebook for the arms expo it says, “Recent revisions to the Japanese Constitution has made it possible for the defense industry to expand overseas”, “this is the best timing for holding a comprehensive defense exhibition in Japan”, and “this is a foothold (for Japan) for entering the Asian market.”

A publicly-owned facility [the Makuhari Messe convention center in Chiba] should not be used for this.

(Screenshots are from Red Flag articles about Japan's Constitutional amendments)

So far, Japanese arms exports have been mainly focused on contributing parts and technology [15] to US-led anti-ballistic missile projects, and sales of maritime patrol aircraft [16] and coast guard patrol boats [17]. However, the country has been largely unsuccessful since 2014 in selling its arms overseas due to inexperience [18] and the small scale of its fledgling arms export industry compared to other countries (Japan does have a large domestic arms industry specialized in supplying specific needs of the Japanese Self-Defense Forces).

However, even as the government has struggled to build an arms export industry, major Japanese corporations have long invested in arms production outside of Japan.

In November, as the DSEI arms trade show was about to begin, a 2017 story [19] by tabloid SPA! resurfaced on social media [20]. It reported that Japanese financial institutions and are investing in cluster munitions, even as Japan reaffirmed its commitment to the Convention on Cluster Munitions [21], and despite a 2017 promise [22] by Japanese corporations to stop investing in producing such weapons.

Cluster munitions are a type of fragmentation weapons primarily intended for use against personnel. Bomblets are scattered indiscriminately across the landscape by air, which makes them hard to recover and neutralize following the end of a conflict. The bombs also indiscriminately target non-combatants. For example, over 80 percent of casualties [22] caused by cluster munitions in Yemen's civil war have been civilians.

The SPA! story quotes a July 2017 report [23] by PAX [24], an NGO based in the Netherlands, that says that, in 2017, the Japanese investment bank Mitsubishi UFJ was “7th in the world in terms of transactions with cluster bomb manufacturing companies, 3rd in terms of financing, and 5th in investment and banking”. A December 2018 update from PAX [25] notes that although Mitsubishi UFJ had promised to divest [22] from cluster munitions, it's unclear if all of its subsidiary companies will do the same.

Given Japan's general lack of a defense export industry and its commitment to selling defense-oriented hardware, some critics of the DSEI trade show in Chiba were also confused about the entire point of the arms fair. Sugihara Koji, a Green Party of Japan politician, took to Twitter, stating [26]:

At the DSEI arms fair, the Japanese Ministry of Defense had Type-10 tanks and Type-16 light armored vehicles on display. Previously, there were plans to sell these military vehicles to Turkey, but it has been reported that (in the end) Japan refused, since the tanks and vehicles would be used for conducting offensive war. So it would seem it would be difficult for Japan to export this hardware.

What was the point of this arms fair, I wonder?

Japanese government officials either ignored or were oblivious to protests. Despite the criticism, and fears Japan is forgoing its pacifist past, Kono Taro [29], the Defense Minister of Japan, expressed one lesson learned from Japan's first large-scale arms fair ⁠— the country needs flashier trade show booths.

At the DSEI JAPAN Defense & Security General Exhibition. Before even addressing technological capabilities, there was a big difference between presentations made by foreign companies and Japanese companies. This is what Japan needs to work on first.