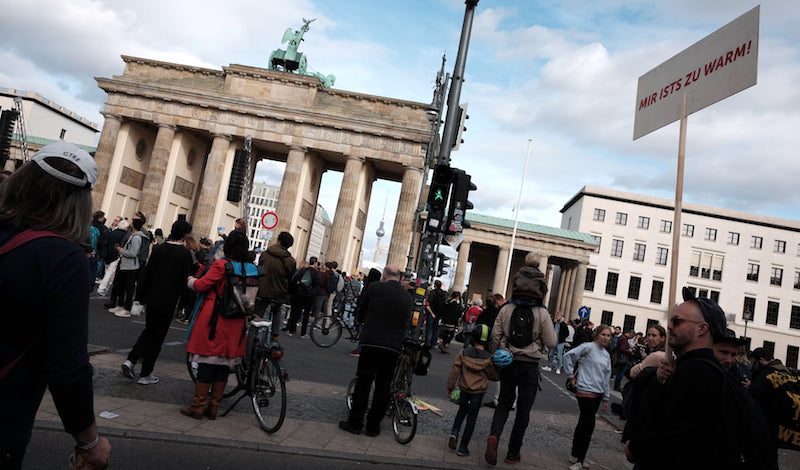 Protesters during the Global Climate Strike in Berlin, September 20, 2019. Photo by Maxim Edwards, used with permission.

This slogan was one of hundreds in a sea of banners, flags, and placards which made their way through the Tiergarten in central Berlin to the Bundestag, Germany's parliament building. At a makeshift stage before the Brandenburg Gate, Carola Rackete, the German ship captain who was arrested [1] for docking a migrant rescue ship without authorisation in an Italian harbour, picked up a microphone to speak.

The crowd waiting to hear what she was going to say, by some counts, numbered over 100,000 (overall, an estimated 1.4 million protesters [2] joined in Berlin in that day, according to organisers). And if there was some joy, it was due to the overwhelming sense of solidarity and common purpose.

That scene was Berlin's contribution to the global climate strike on 20 September 2019. It was not the first protest initiated by Fridays for Future [3], an ecological movement founded by 15-year-old Swedish activist Greta Thunberg. Global climate strikes had already been called on 15 March and 24 May of the same year. Around 1.8 million people from over 125 countries took part in the latter.

The date of September's climate strike was not chosen at random. On 20 September, the German government's climate cabinet convened to decide on Germany's future ecological action plan. The preparations for the upcoming UN climate summit were also underway in New York City. According to Fridays for Future's website, protests were held in at least 575 German towns and cities [4] that day.

Many people took to social media to share impressions from various cities all over Germany.

For instance, protesters in Freiburg came together to make some noise (literally):

And David Croyé shared an impression from the protest near Berlin's Brandenburg Gate:

The demands of the protest in particular and the movement in general are clear: adherence to the climate targets of the Paris Climate Agreement [15], a global climate deal. And ever since this summer of protest, Germans have been fiercely debating whether their government is taking those commitments seriously.

In December 2015, Germany was one of 195 countries that signed the Paris Agreement [15], whose main goal was to reduce global warming to below 2°C, in order to minimise, or if possible avert, its catastrophic impact. Signatories also agreed to review their progress and approaches to the issue every five years, in order to intensify their efforts and, if necessary, implement more stringent targets.

At some point in 2018, it became clear that Germany would not be able to meet its set targets by 2020. Among all participating states, Germany currently ranks 27th [16] on the Climate Change Performance Index (CCPI), which monitors the countries’ progress with regards to the Paris Agreement. In recent years, the country's attempt to reduce carbon dioxide emissions has stagnated. According to Statista [17], in 2016 Germany’s carbon dioxide emissions amounted to 2.23 per cent of the global sum even though the country makes up around 1 per cent of the global population. At the top of the chart comes China with 28.21 per cent.

The environmental outlook is little better in other sectors. For instance, even though flying is the most ecologically damaging means of transport [18], the number of air traffic passengers in Germany increased [19] from about 136,000 in 2004 to roughly 220,000 in 2018. Additionally, the German Federal Motor Transport Agency (Kraftfahrt-Bundesamt, or KBA for short) estimates that there are about 47.1 million registered passenger cars [20] in Germany, a country with a population of approximately 83 million. The country's food industry is likewise dominated by wastefulness and exuberance. Overall, about twelve million tons of food [21] are wasted in Germany each year which equals roughly 75 kg per consumer. 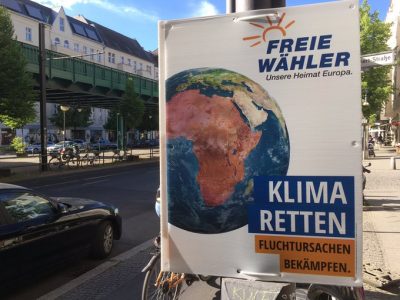 “Save the climate: fight the causes of migration,” reads this campaign poster from the conservative Freie Wähler movement before EU elections. Berlin, 2019. Photo (c): Maxim Edwards. Used with permission.

So where does Germany go from here, as the less than modest climate change targets seem beyond politicians’ reach and have been scaled down even further [22] despite criticism for the initial plans?

There are signs that frustration with these failures is surfacing in electoral politics. One of the country's most important political upsets this year was the surge in support for the Green party during European and local elections.

It's important to note that the former were the first elections since the 2015-16 “refugee crisis” in Europe. Accordingly, analysts feared a sharp rise in support for right-wing nativist parties. To an extent, that has happened, with support for the AfD [23] rising across the country in various elections [24]recently.

But ambitious, insurgent political movements are quick to adapt. After all, there are indications that, in Germany, as elsewhere in Europe [28], right-wing nationalists could adapt to rising popular concern about ecological issues, providing a potent new framing to their anti-migrant politics.

For now, it remains to be seen what the German government's final decision on their climate action measure will be. Various lawsuits against the government's handling of the climate crisis and their planned measures are already underway. On 31 October, the first verdict for one of those lawsuits was reached: the claimants (three bio farmers and Greenpeace) lost the case [29] on the grounds that the government had issued a proclamation of intent and not made a legally binding obligation. The judges did however grant the claimants the possibility to appeal the judgement at the higher administrative court, leaving a backdoor open for a potential judgement in the farmers’ and Greenpeace's favour.

Most recently, amidst further criticism for abandoning clean energy sectors such as wind energy [30], the government gave the green light for starting up the coal-fired power plant Datteln 4 [31] by the summer of 2020. The move has dismayed ecological activists, who stress that Germany, as an industrialised country, carries a particular responsibility [32] for climate change. These recent moves have left those activists wondering whether Chancellor Angela Merkel really meant her words before the UN's Climate Action Summit in New York in late September, when she stressed that “we all have only one earth.” [33]

But in light of the consensus that the world is running out of time to slow the pace of climate change, how long can Germans afford to wait for their rulers to match their words with deeds?