Is it a peaceful way out of the political crisis? 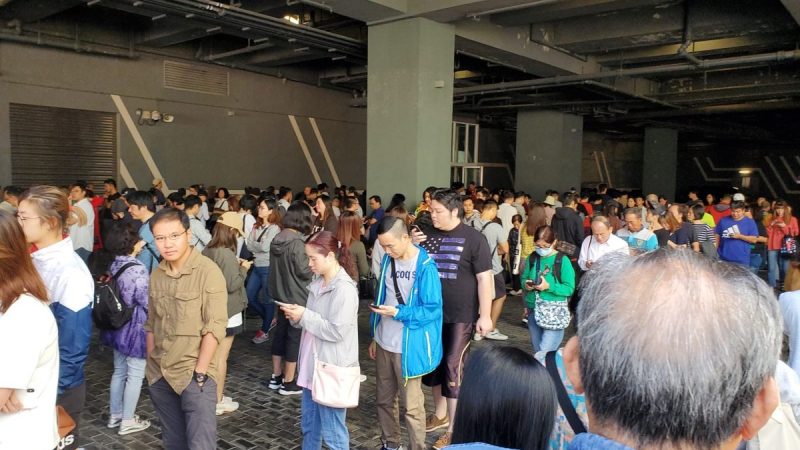 Voters queue outside a polling station. Photo via the Stand News, used with permission.

About 3 million Hong Kong voters came out to vote for the 2019 district council elections on Sunday, November 24. The voting rate at 9:30 p.m. local time was more than 69 percent with 2,853,608 votes. It is estimated that by 10:30 p.m. when all polling stations closed, the voting rate will be up by 2-3 percent. The election turnout represents an absolute record of participation in any Hong Kong elections. In comparison, the same district elections voting rate in 2015 stood at 47 percent.

The participation figure is considered to be an important indicator of citizens’ reaction to the ongoing political crisis triggered by the anti-extradition protests that took a massive form in July of 2019. Hongkongers are now determining their choice between pro-establishment and pro-Beijing camps on one hand and pro-democracy candidates on the other.

The election result is the most “unpredictable” in recent years. First, the establishment has been blamed for blindly supporting of the extradition bill. Second, a large majority of Hongkongers are getting more and more frustrated with the vandalism and disruption associated with anti-government protests. Moreover, within the pro-democracy clan, the division between radical and peaceful protesters has deepened, as the former group is skeptical of representational democracy.

Ahead of election day, pro-democracy netizens had called for a protest ceasefire on social media, including the local equivalent of Reddit, LIGHK. As a result, elections went smoothly on Sunday.

As everyone waits anxiously for the most unpredictable election result, here is a quick explainer of the district election system and the political dynamics at play

Hong Kong has 18 district councils that advise the government on the development of community facilities and services.

As of 2019, constituencies of the district councils include 452 elected members and 27 ex-officio members who act as chairpersons of rural committees. The elections adopt a “single-seat, single-vote system” and the governmental Electoral Affairs Commission (EAC) is responsible for defining the geographical boundary of each of the 452 seats.

Considering that districts can be rather small, with about 10,000 voters, a slight difference in drawing the district borders can affect the election result. In fact, pro-democrats have accused EAC of gerrymandering district borders in this year's elections.

The election system is also favorable to resourceful pro-establishment political parties, as they are able to support hundreds of candidates to run election campaigns in all of the small districts. For example, the pro-establishment managed to win 68 districts with zero competition in 2015, simply because the democrats did not have enough resources to run for all 431 districts.

As a result, the pro-establishment always wins a majority of seats in district elections. In 2015, out of the then-431 district councilor seats, the pro-establishment won 299, about 70 percent, while pro-democrats only got 125 seats. Even back in 2003, after millions protested against the national security law legislation, the democrats only managed to win 151 seats out of the 400 seats, as they only had resources to support 226.

As the pro-establishment camp has monopolized the district councils for two decades, it has developed a solid grassroots networks, especially among the retired population through community services and free gifts. In 2018, among the 3.81 million registered voters, about one third — 1.23 million people — were above 60 years old, while the number of voters between 18-30 was less than 630,000.

Project Storm: Seeking a peaceful way out of the political crisis

In this context, the pro-democracy camp has come up with initiatives to change the scenario of local elections. Benny Tai, the co-founder of the Occupy Central movement, proposed a new initiative called Project Storm in 2017. The idea of the political campaign is to win a majority of seats in the district council elections so that the democrats can gain an additional 117 seats among the 1,200 seats that make the Election Committee. He believes such a result would generate political pressure and compel Beijing to reintroduce less restrictive political reforms.

Though some pro-democracy groups are skeptical of representational politics, they are eager to experiment with bottom-up grassroots democracy through district councils. Hence, for the first time in district elections history, the pro-democracy candidates are running in all 452 district constituencies.

Although the election system is not favorable for the pro-democracy camp, there is still hope for a change.

Indeed while the pro-establishment camp depends on the  “iron vote” of their hardcore supporters, swing voters are more likely to vote for the pro-democracy candidates. Moreover, voters with liberal views are eager to see pro-democracy politicians taking a leadership position in order to channel the energy of the protests into a more sustainable and peaceful political movement.

Last but not least, young people have become more active in political participation. Among the 380,000 newly registered voters in 2019, about 48 percent are between 18-35.

The election results will be announced on November 24, 2019. The pro-democracy camp is hopeful to win a majority of seats and help find a peaceful way out of the current political crisis. Stay tuned for more election result analysis.