From the mountains of Nepal to global pet shops 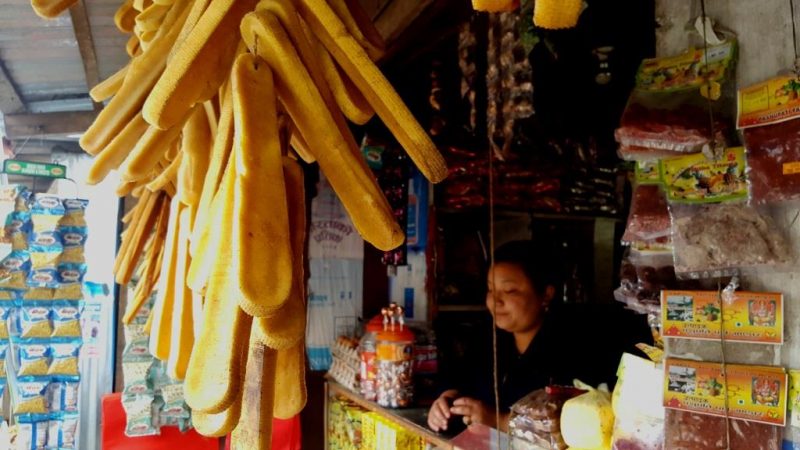 Chhurpis hung up for sale in a shop in the Ilam District of eastern Nepal. Photo by Sanjib Chaudhary. Used with permission.

As you pass by the misty Kanyam tea gardens in the Ilam District of eastern Nepal, you will come across bunches of hard cheese hanging in most of the shops.

The hard cheese, known locally as chhurpi, is made from milk collected from naks (female yaks), cows and chauris (a cross between yaks and local hill cows). An excellent source of protein, people throughout the Himalayan region, including Tibet, Darjeeling and Sikkim, and Bhutan, love this hard-to-chew cheese.

However, chhurpi is now a favoured food for dogs in the United States and Europe:

Yeti Dog Chew is an all natural and delicious dog chew made with the goodness of Himalayan yak milk.These are a perfect option to keep your dog happy and busy for longer hours in a safe & natural way.Check out our website to see different sizes of chews available for your dogs ? pic.twitter.com/RvVy2pffZl

According to the Nepal government’s Trade and Export Promotion Centre, in the fiscal year 2017/18, the country exported more than 800 million Nepalese Rupees (US $7 million) worth of chhurpi. According to local businessmen, about 60-70 percent of the chhurpi exported as dog chew to the United States and Europe is produced in the Ilam district itself. 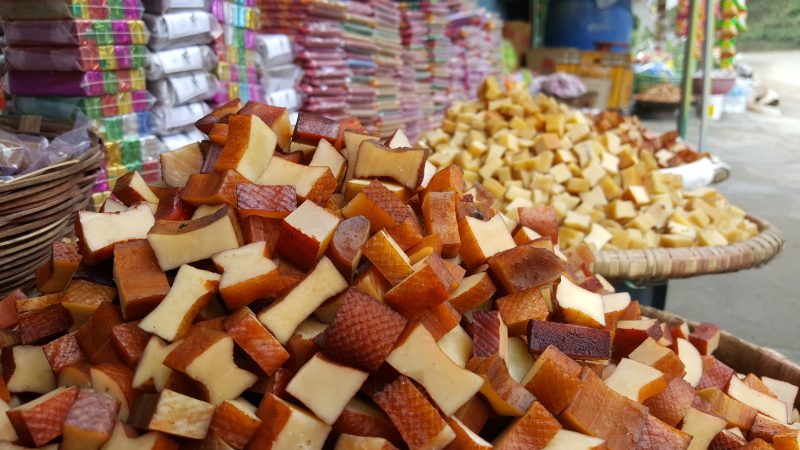 Most cheese varieties tend to be soft, how do they harden this cheese? After collection, the milk is boiled and the fat removed. They then separate the solids from the milk, wrap them in a jute bag to squeeze out the water from the chhurpi, and dry it by putting it out in the sun or by hanging it over a fire.

[…] Once the milk has cooled down, it is treated with 10 ml of lime juice and 10 mg salt for about 100 gallons of milk. The sour of the mild acid coagulates the milk and the salt speeds up the process. The solids are then separated using a burlap sac [sic], which is washed several times using warm water to remove the whey, and any hints of salt and lime juice.

The solids in the burlap sack are then subjected to squeezing for about 3 weeks when the cake obtained contains at most 5% moisture. The cakes are pressed using weights to remove the excess moisture.

The cake is then cut to size and prepared for cooking [sic] under the sun and smoke[d] for 2-3 months. […] 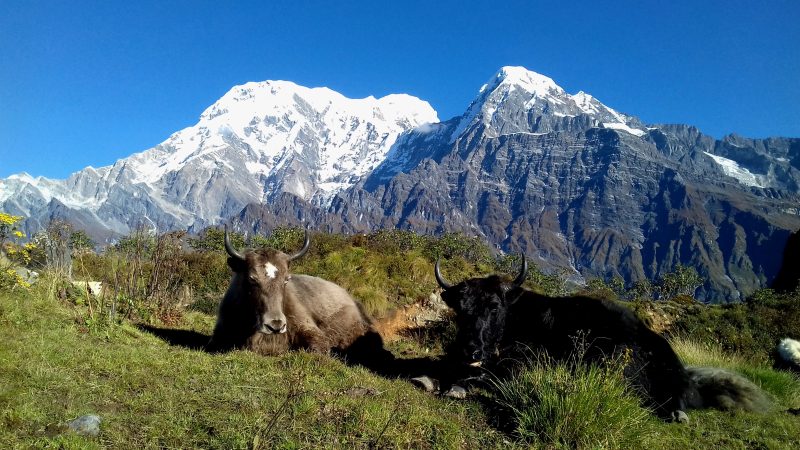 Two chauris resting at a highland meadow in Nepal. Chhurpi is made from the milk from yaks, cows and chauris. Photo by Sanjib Chaudhary. Used with permission.

The idea to market chhurpis as dog food came from brothers Suman and Sujan Shrestha who, together with Nishes Shrestha, started the company Himalayan Dog Chew in 2003. The idea was sparked when one of the brothers noticed a dog gnawing at a chhurpi. In 2007, they launched their product at a pet fair in Bellingham, Washington. Since then, the company has come a long way: it is currently the largest exporter of Himalayan cheese out of Nepal, employing more than 9,000 people. In 2015, these three Nepali entrepreneurs appeared on the popular American TV show Shark Tank, even though they were already making over US $5 million in sales a year.

Many other companies have since followed their lead, but Himalayan Dog Chew has now diversified, evolving from a single product-oriented business into a full pet supply company. According to its website, the company now proudly partners with a third-generation dairy farm in Washington State, which produces 10 million pounds of milk per month and over 124 million pounds per year, all for Himalayan Pet Supply.

Since this hard cheese is being exported to so many countries, including Canada, Germany, Hong Kong, India, Israel, Japan, Korea, Malaysia, Russia, Singapore, Taiwan, Thailand, United Arab Emirates, the United Kingdom and the United States, its manufacture has become a regular source of income for Nepal's rural farmers.

To stay afloat in the market, however, manufacturers and exporters need to make sure they keep re-engineering and diversifying the product:

My little bean is losing a few teeth, partially because of @himalayanpet’s yak milk chew. Devastated that I gave her something that broke her teeth & caused her so much pain. So be aware that these chews are problematic at best and potentially dangerous, esp. for older dogs. pic.twitter.com/qlZ7e7F2hX

As per the company’s advisory, the chews might cause choking, indigestion, blockage and breakage of teeth and so advise constant supervision of dogs during consumption.