Ultras tried to censor news about their friend's prison sentence 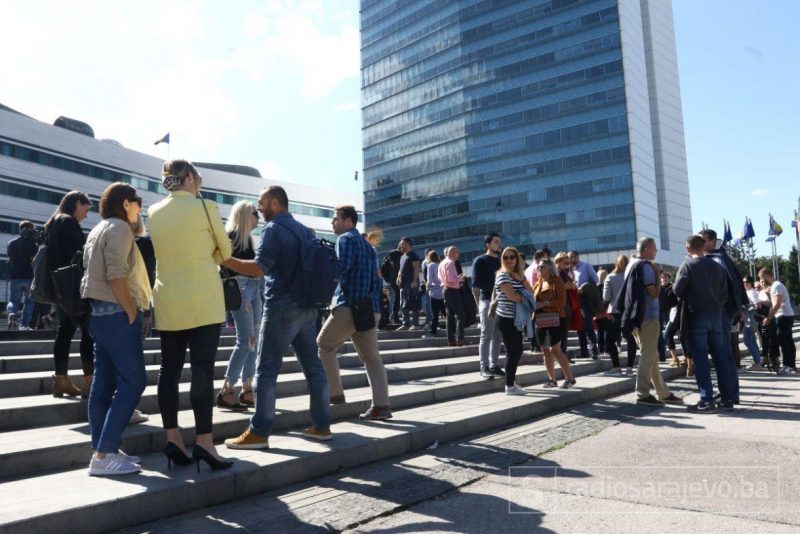 Protest of journalists in front of the parliament in Sarajevo, 30 September 2019. Photo by Dženan Kriještorac, courtesy of RadioSarajevo.ba, used with permission.

A group of hooligans who presented themselves as “fans of football club Sarajevo” besieged the newsroom of the online news portal RadioSarajevo.ba in the capital of Bosnia and Herzegovina (BIH) during the late hours of 27 September 2019. Threatening death and harm to his family, they forced an employee to erase a piece of news that reported that a member of their group had been sentenced to five years in prison in Belarus for possession of cocaine.

Creating a de facto hostage situation lasting 2.5 hours, the hooligans also forced the journalist Almir Sokolović “to call other news portals and newspapers and ask them to remove the article as well.” The police intervened, and arrested two members of the group on charges of threatening the safety of Radio Sarajevo journalists and editors.

Football and other sports fans groups called ultras have been playing significant role in the political life of Balkan countries due to their mobilization potential through association with popular clubs.

The targeted media outlet republished the article that was targeted by the censorship attempt and alarmed the public about the situation, pointing that this incident is just an instance of the atmosphere of pressure against free media from different centers of power. OSCE Representative on Freedom of Media and Reporters without Borders condemned the attack, with the local association BH Journalists, a member of the International Federation of Journalists, demanding strict sanctions for the assailants.

Some 50 journalists and other media workers held a protest walk to the parliament in Sarajevo on 30 September, urging the authorities to make sure journalists can work in secure conditions without fear of assault from. 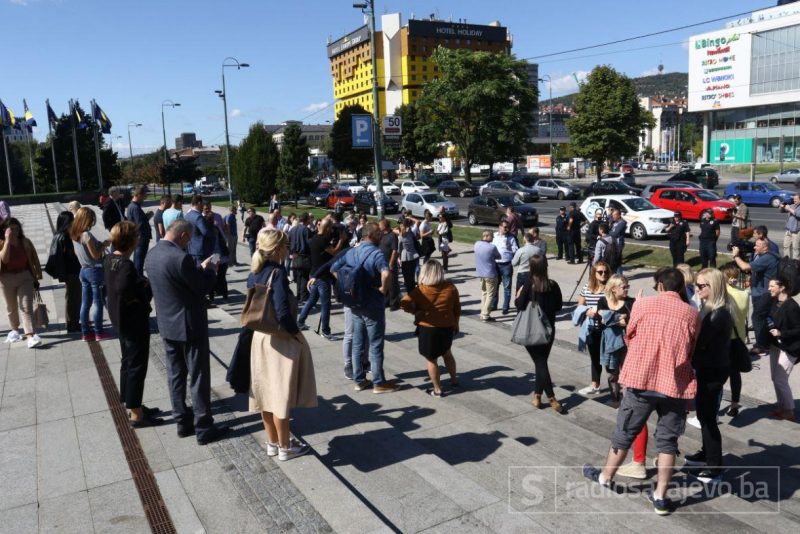 Protest of journalists in front of the parliament in Sarajevo, 30 September 2019. Photo by Dženan Kriještorac, courtesy of RadioSarajevo.ba, used with permission.

Global Voices talked to Faruk Vele, member of RadioSarajevo.ba editorial team, about the aftermath of the incident. He explained that they consider the incident as “brazen and unacceptable attack on their newsroom and endangering the security of our coleauges and the members of their families.”

Assaults by hooligans–in our view–are a new method for disciplining journalists and newsrooms, and we resolutely stand against this method. We are thankful to all the colleagues from Bosnia and Herzegovina, the Balkan region and the whole world who recognized these dangers and offered support to our team. These included Reporters without Borders, domestic journalist associations and individual outlets…

We are encouraged by the fact that the Sarajevo police intervened and quickly identified the perpetrators. However, unlike this case, in many similar cases in Bosnia and Herzegovina the police failed to react to attacks on journalists quickly and professionally. There were incidents, for instance in Mostar, when some policemen supported attacks on journalists.

The mentioned incident in Mostar (a city in southern Bosnia and Herzegovina) took place on 5 June, after a bomb explosion. The owners of the premise that was targeted by explosive device assaulted three photojournalists that came to the crime scene, and through serious threats forced the female journalist Meliha Smajkić from the newspaper Dnevni Avaz to erase recorded material from her camera phone. Two police officers securing the crime scene abstained from helping the reporters, and another policeman used “demeaning and insulting language” in online comments to attack the female journalist and her profession. The district/cantonal branch of the Ministry of Interior initiated disciplinary measures against the three policemen.

The case of assault against RadioSarajevo.ba is currently handled by the Cantonal Prosecutor's Office of Sarajevo Canton, and the trial in front of the local court is pending. The suspects have been released on bail.

The journalists are hoping that the Bosnian judiciary will finally start to systematically address the issue  of journalists’ safety. Recently the Municipal Court in the town of Visoko passed a suspended sentence of two months in jail against the son of a local major who threatened a TV journalist via the messaging and calling app Viber. In their announcement from 14 November, the Association of journalists of BIH took it as an indicator that the “law enforcement institutions finally started to take these issues seriously, and that such sentences would serve as a warning to all future potential attackers against media workers.” 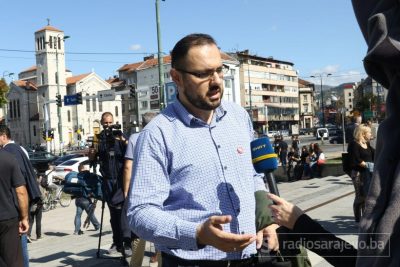 Faruk Vele at the protests of journalists in Sarajevo, 30 September 2019. Photo by Dženan Kriještorac, courtesy of RadioSarajevo.ba, used with permission.

Mr. Vele explained to Global Voices that the conditions for journalistic work in Bosnia and Herzegovina are getting harder by the day, and to improve the situation the Bosnian society as a whole needs to send a message that attacks on journalists and their families and the endangering of freedom of expression must not be tolerated if democracy is to be preserved.

Unfortunately we witness that with every new day, it's getting harder to work as a journalist here. Journalists are brought to the margins of society in every way, and lately they have been labeled as ‘legitimate targets’ for anyone to unleash their anger.

At the recent protests in Sarajevo we raised our voice against violence as model of behavior in our society, and declared that we will continue the fight for our freedoms, because the journalists are important members of this society. We hope the journalists will never have to fear for their own safety, as was the case with our newsroom. However the statistics on cases of pressure indicate that the conditions are worsening and that it's necessary for society to take action.

Therefore we expect that this society, through different levels of government, send the message that they want to live in a state where the journalists would not have to fear for their safety and will enjoy the freedom of speech and public expression… Anything but that is a road to darkness! We cannot allow this to ourselves, primarily for the sake of our children.