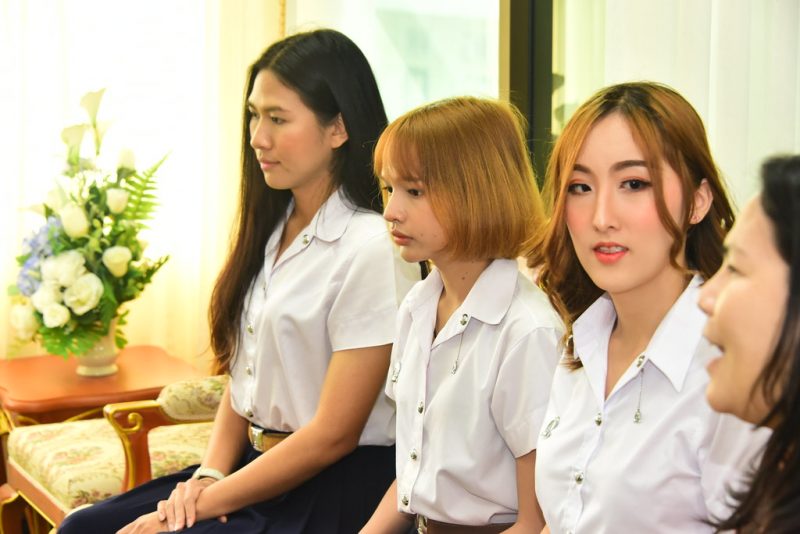 Jirapat Techakijvekin (second from right) when she went to file the petition with the Committee on Consideration of Unfair Gender Discrimination. Photo and caption from Prachatai

Chulalongkorn University, Thailand's top public university, has finally amended its uniform regulations to allow students to dress according to their gender identity, after a group of students earlier this year filed a request for this change and also filed a complaint against a Faculty of Education lecturer.

An announcement from Chulalongkorn University dated 7 November 2019 said that the University has approved the amendment to its uniform regulations, which now clearly states that “students may wear the uniform according to the gender they have been assigned at birth or according to their gender identity,” allowing students to dress accordingly in class, in examinations, or at formal events.

While many lecturers will not punish or pressure transgender students into dressing according to the gender they were assigned at birth, students still face discrimination or transphobic comments from some members of staff, especially in faculties which are perceived as more ‘conservative’, such as the Faculty of Education, where students have often been threatened with disciplinary action. The amendment to the uniform regulations may mean that trans students can no longer be accused of violating university regulations and will no longer have to file individual uniform requests. However, it may not end discrimination on the individual level.

In January 2019, Jirapat Techakijvekin, a student at the Faculty of Education, filed an appeal with the University’s grievance committee after the Faculty Board of Administrators overturned permission for her to wear the uniform for female students and ordered her to dress as male or face extreme penalties. Jirapat said that she filed a formal request with the Faculty in September 2017, and in December of the same year, she was informed by the Faculty that permission has been granted only for it to be overturned on 11 January 2019.

Jirapat also said that she faced transphobic comments from Niran Sangsawat, a special instructor, in November 2018. Niran reportedly told her to either dress as male for his next class, or not to come to class at all. He also told her that being transgender is just like being insane, and said to her: “It is good enough that we’re allowing you to study instead of sending you to an asylum.” He also allegedly told Jirapat that he would be asking the Faculty to reconsider her case, after which the Faculty’s decision on her request was overturned.

Other students also came forward on social media to say that generations of students for the past 35 years have faced discriminatory behavior while in Niran’s class. Student activist Netiwit Chotiphatphaisal also launched a Change.org campaign calling for the Faculty of Education to take disciplinary action against Niran. However, it is unclear whether the Faculty will be taking any action.

Jirapat and two other students also went to the Department of Women’s Affairs and Family Development (DWF) on 29 January 2019 to file a formal complaint with the Committee on Consideration of Unfair Gender Discrimination. Under Section 18 of Thailand’s Gender Equality Act, any person who thinks that they have suffered from gender-based discrimination may file a complaint with the Gender Discrimination Committee, which has the authority to ensure that appropriate actions are taken to end and prevent discrimination, and to ensure that there will be compensation and remedy for the injured party.

The Thai LGBTQ+ community faces daily cases of discrimination and inequality, most living under strong pressure not to bring shame to their family, while the country’s tourism authority advertises Thailand as being a queer-friendly destination, even launching the “Go Thai, Be Free” campaign as a way to attract LGBTQ+ tourists. Bangkok has been called “Asia’s gay capital” and is known for its gay nightlife scene, transgender beauty queens, and gender reassignment surgery. However, even with the Gender Equality Act of 2015, there is very little legal support for the LGBTQ+ community.

And even if homosexuality is no longer a crime under Thai law, the LGBTQ+ community still faces discrimination in the workplace, school, and in the home. There are reports of LGBTQ+ people being denied promotion or fired from their jobs after disclosing their sexuality, or questioned inappropriately about their sexual orientation and gender identity during interviews. LGBTQ+ students face harassment and bullying from their teachers and peers based on their sexual orientation and gender identity. Transgender inmates in Thai prison have difficulties accessing hormone treatment, and many faced a condition known as “double imprisonment” when transwomen who have not undergone gender reassignment surgery are held in a segregated area inside men’s prisons.

Thailand currently lacks a gender recognition law, preventing transgender people from changing their title. It also does not have a marriage equality law, meaning that same-sex couples cannot be legally married, leading to other issues, such as not being able to adopt children or to make medical decisions on behalf of one’s partner.