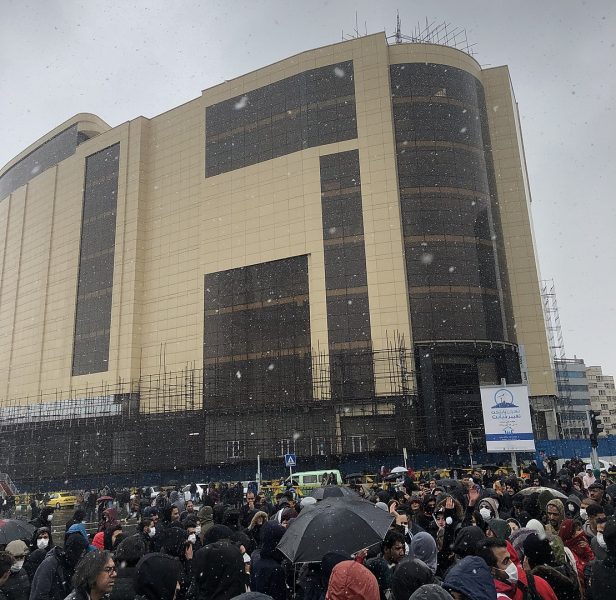 Protests have erupted [3] across oil-rich Iran since the government announced, at midnight on November 15, a sharp increase in petrol prices. The announcement came as the country finds itself in a dire economic situation due to crippling US sanctions, corruption and the mismanagement of financial institutions. The government said the price increase is aimed at raising revenue to fund cash handouts for Iran's poorest citizens.

The state has reacted to the protests with brutal and deadly force, and by shutting down the internet, but has so far failed to curb them.  Slogans have tended to be more political than economic, with protesters chanting against Islamic Republic leaders, foreign policy and in some cases expressing support of the Pahlavi dynasty.

We're horrified at reports that dozens of protesters have been killed in #Iran [4], hundreds injured & over 1000 arrested since Friday. We're alarmed that authorities have shut down the internet to create an information blackout of their brutal crackdown. We're investigating.

Iran’s government has begun rushing out [6] promised direct payments to millions of Iranians, a sign that the regime is alarmed at the scale of protests, during which protesters have torched banks, religious schools, military bases, and government offices.

Iran was the scene of widespread demonstrations [11] about two years ago, and while those protests bear some similarity to the current uprising, there are also key differences.

Saeed Payvandi, a Paris-based academic and sociologist, told Global Voices that “today's movement is spontaneous and without leaders and unclear requests like previous one in 2017-18.” Payvandi notes that protesters’ chants very specifically target figures such as the Supreme Leader Ayatollah Khamenei [12], and President Rouhani [13]. Another main difference, Payvandi says, is that “protesters, contrary to two years ago, are trying to be visible by occupying streets and squares.”

Payvandi says that the sharp increase in petrol prices has “given the movement an economic legitimacy, although slogans quickly became radical. The main problem, as before, is trying to win public opinion and bring people into streets.”

A good portion of the public agrees with the protesters, Payvandi says, but are hesitant to join them. “The authorities know the hesitation of the middle class and non-state-dependent elites, and that's why they create chaos and insecurity. In the short term, the winner is the Iranian state, because the middle class will be scared to join protesters.”

Shahed Alavi, a journalist who monitors protest movements, told Global Voices that one of the main differences is the range of social classes participating. “Two years ago,” Alavi says, “it was mainly poor people in mostly small cities. But this time the middle classes have joined them, and the protest is more widespread, having emerged in both big cities such as Tehran, Shiraz, Isfahan, and small ones.”

Another key difference, says Alavi, is the extreme violence being used by security forces. According to a source in the Ministry of Interior, the death toll is near 200, while thousands have been injured and at least 1,000 arrested. Iran's Revolutionary Guard [18] has also reported that three of its members have died in confrontations with protesters.

While violence and repression are omnipresent in the country, some protesters are promoting peace and messages of non-violence:

Protestors giving flowers to the police saying “We are not the enemy”, in Shiraz. #iranprotest [14] pic.twitter.com/XYGgtRqMtP [19]

Where is my internet?

Yet another difference from the previous protests is the scale [21] of the current internet shutdown.

Iran has a long history of censorship, filtering, and repression of netizens, but with the near-total shuttering of the internet [22] on Saturday, November 16, the government entered new territory. Alp Toker, executive director of NetBlocks, a digital rights NGO, told CNN [21] that the current Internet shutdown was the “most severe disconnection tracked by NetBlocks in any country in terms of its technical complexity and breadth.”

Amin Sabeti, a London-based internet researcher, notes that the shutdown is occurring just as President Rouhani and the Minister of information and Communications Technology have been promoting the idea of internet freedom. “We've seen a complete blackout in Iran,” Sabeti says. “The main way of communication is the old-fashioned one, which is a phone call.”

The United States Ambassador to Germany has claimed [23] that the US has the technical ability to restore internet connectivity in Iran, but Sabeti believes this is implausible.

Iranians outside the country have been trying to raise awareness by organizing demonstrations, but putting pressure on Iran's government is difficult, as the country is under sanctions and already quite isolated.

According to Azadeh Pourzand, human rights activist and director of Pourzand Foundation, Iran's government cares deeply about its international image.

“There is certainly leverage left for the international community to put pressure on Iran in light of the recent unrest and the use of violence to crackdown on protesters,” Pourzand says. “If nothing else, beating and killing of protestors can become an inconvenient act for the Islamic Republic and cause for losing any remaining international legitimacy.”

Pourzand believes, however, that the recent protests are not getting the attention they deserve. “This partially may have to do with political considerations of some newspapers and publications,” she says. “But, there is also one other factor to consider this time around: we see a global trend in terms of citizen discontent, uprisings and protests. For instance, right now Hong Kong’s protesters are on the news, but they have been on the street for long weeks and haven’t always made it to the headlines. So much happened in Chile recently and I am not sure if Iranians followed it as closely as they (we) expected the world to follow us.”

This is the reason Pourzand believe the role of the Iranian diaspora is key. “Let’s put it this way,” she says. “If there is not enough international coverage, it is also partially our fault for not having enough resources to effectively communicate and advocate with international publications in a timely manner and in languages such as English, French, German, Arabic, Spanish, etc. Moreover, let’s not forget how difficult it is to get news from Iran and verify data. International newspapers need constant updates and eyewitnesses, of which we sadly do not have enough at our disposal. Still, Iranians are risking their lives to hold their government accountable. At the very least they deserve to be recognized and not abandoned.”