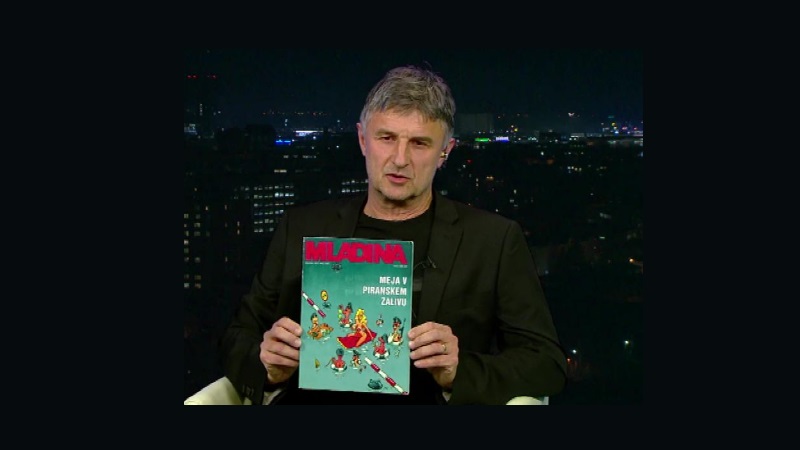 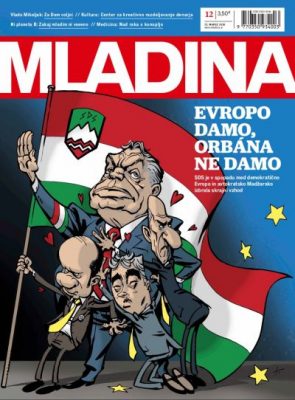 For decades, Robert Boteri has been a part of Slovenian cult magazine Mladina, which has been renowned since the former Yugoslavia for its avant-garde content and fearless approach to controversial subjects.

In April 2019, Mladina caused a diplomatic spat after it published a cover with a caricature of Hungarian Prime Minister Victor Orban raising his arm in a Nazi salute while surrounded by minor figures of Slovenia's right-wing, including Janez Janša. The illustration referred to Orban cronies’ recent purchase of several Slovenian media outlets, previously owned by persons related to Janša’s political party.

In an interview for Meta.mk, Boteri, now Mladina's creative director, talked about disinformation in Slovenia. He says, for example, that nationalist websites in Slovenian that spread false news and hate speech go unpunished as judges avoid sentencing anyone for fear of hurting freedom of speech; or how some media outlets accept bribes to discredit certain politicians and businesspeople.

Meta.mk: What is usually the subject of false news in Slovenia?

Robert Boteri (RB): Lately, most of the disinformation was related to the migrant crisis. There was information, especially in nationalist websites, with negative comments which were all directed at presenting the migrants as criminals. The other thing is the aimed discreditation of certain politicians and businessmen, when certain websites were paid off in order to publish a certain scandal. During the process, they are handed over certain documents, the website publishes them and the affair begins. In the end, it is easy to see that it was done for a certain purpose.

Meta.mk: How does the state and the media react?

RB: Hysterically! It is always hysterical. If you publish a document in the morning which serves to back your claim that someone knows someone and then during the day the story is being built, in the evening comes a rebuttal that it is not true, as in Slovenia everyone knows everyone. But, at the end of the day, no one knows anything. There was information that migrants have entered a zoo in Germany and have eaten a goat. The news had one million clicks. Then, information arrived that that city doesn’t have a zoo at all, nor goats, that this incident never happened, and afterwards this news piece had a hundred times fewer clicks.

Meta.mk: Who is publishing this kind of “news” most of the time?

RB: What is especially frightening is that someone does these things for profit. Because a lot of clicks means adverts and a lot of money. It is not done because of conviction or ideology, but for money. That’s what the online media is.

Meta.mk: Are there any regulations against the spread of false news?

RB: We have only one media inspector, who is responsible for the country and it is not possible for him to cover everything. Therefore, there are only talks about efforts to curb the hate speech on the internet, but no one in Slovenia has been convicted, since, in the end, the conclusion is that these were words that were written somewhere and “we cannot go back”, as it was in former Yugoslavia and that by acting in such manner we shall be violating freedom of speech. Therefore, in a way, it is allowed even to threaten someone, a group, a certain nationality, and all of that can be kept hidden behind freedom of speech.

Meta.mk: Is there a law in Slovenia that regulates hate speech?

RB: We have a law, but the judiciary has an opinion that if you cannot establish a direct link between the written word and the criminal act, that can't be subject to persecution. That means that you say: “I would put the migrants up against the wall and shoot them” the court will not persecute you because it will claim that you have just said that and that you don’t have a gun to carry that out i.e. it is not a serious enough crime to press charges.

Meta.mk: What do the media associations say?

RB: Certainly, there are such articles. People read a lot about the fake pages in the benefit of Trump and the false news they contained, and these were most present in the Slovenian media scene. When the country's name was changed and when your former prime minister fled the country to [Hungary]. We even had an interview with a person who explained how these intelligence data are used for political goals.

There is a lot more news about Macedonia compared to Albania, Kosovo or Montenegro. In the past, Mladina even had a front cover devoted to Macedonia during the time of the conflict for water between the citizens of Vevchani and Oktisi. That was a major subject.

Meta.mk: And what is the image of Macedonia, which aspires EU membership?