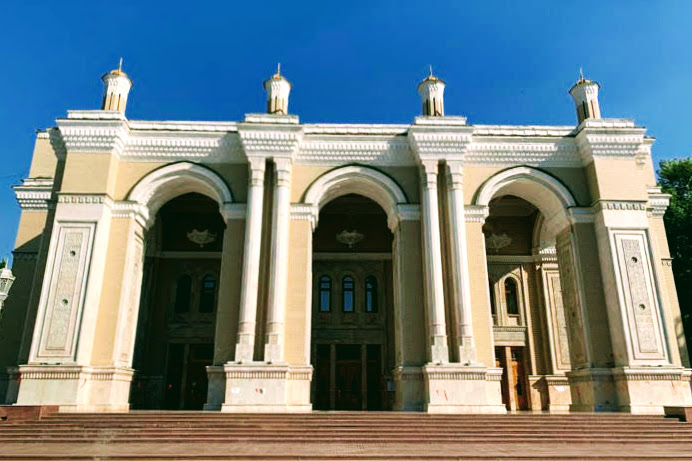 Navoi Theatre in Tashkent, Uzbekistan in 2019. Photo by Filip Noubel.

A historic theatre in Central Asia demonstrates an ongoing connection between Japan and Uzbekistan.

Opened in 1947, the 1,400-seat, Soviet Orientalist-style Alisher Navoi Opera and Ballet Theatre in Tashkent, Uzbekistan was built in part with the help of convict labour by Japanese soldiers who had been transported to Uzbekistan following the end of the Second World War in August 1945.

The theatre in Tashkent illuminates not only a continuing connection between Central Asia and Japan, but also the fate of millions of Japanese troops and civilians stranded all over Asia at the end of World War II.

In August 1945, an estimated 6.6 million Japanese soldiers, colonial administrators, colonists and other members of the military and occupying forces — about 9 per cent of the total population of Japan — were located all over Asia and Oceania. At war's end, all of these people were faced with the challenge of somehow making their way back to Japan.

Not everyone would return to Japan immediately, if at all. For example, following the Soviet invasion of Manchuria in 1945, 456,000 soldiers and civilians employed by the Japanese wartime occupying regime were transported by Russian forces to labour camps across the Soviet Union. For the next decade, internees were engaged in forced labour including constructing power plants, mining coal and building bridges and roads as a form of war reparations to the Soviet Union.

Of the Japanese soldiers and civilians interned for forced labour by the Soviet Union after the end of the war, about 25,000 were taken to Uzbekistan. One of their projects was the Navoi Theatre. A plaque commemorating their work can still be found on the outside of the building. 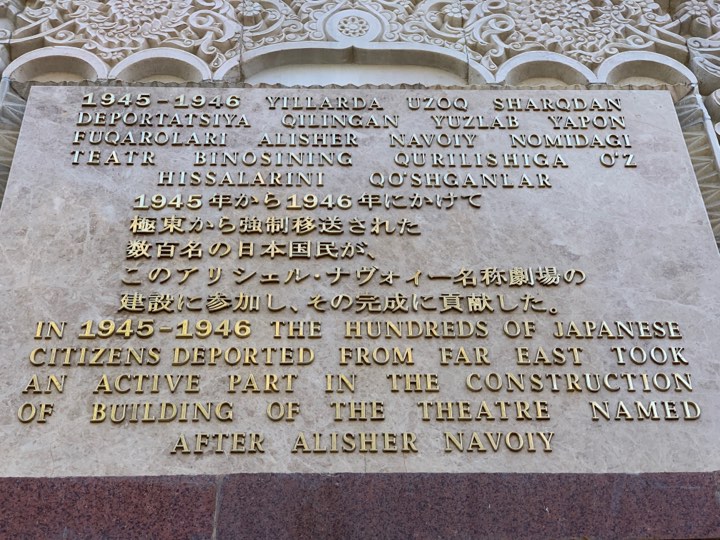 Plaque on side of Navoi Theater that praises Japanese citizens who were forced to work. Photo by Filip Noubel.

If they survived years of harsh winters, back-breaking work and very little food, many Japanese internees would wait up to a decade before being repatriated (引き揚げ) back to Japan. Repatriation of the 6.6 million Japanese soldiers, colonists and other former occupation forces at war's end was a massive effort. To deal with the influx of returnees, the Japanese government set up repatriation centres in several prominent ports all over Japan, including Maizuru. 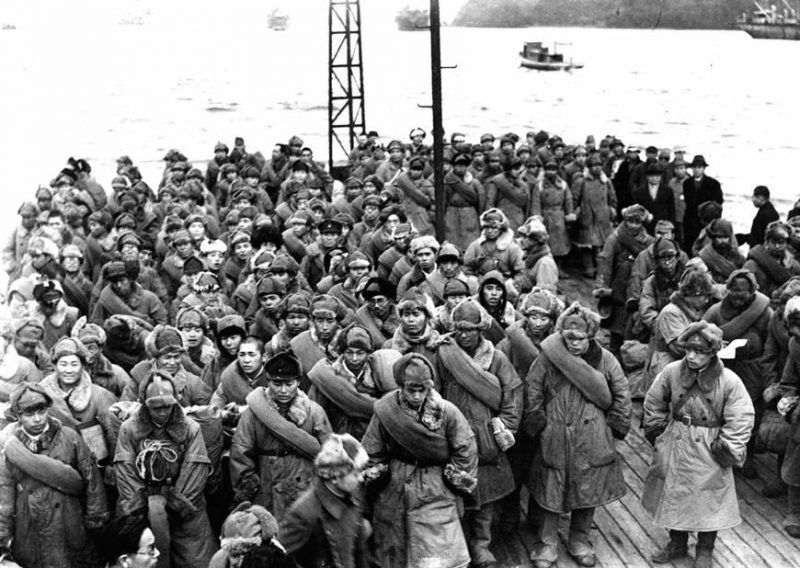 Repatriated Japanese soldiers returning from Siberia wait to disembark from a ship at Maizuru, Kyoto Prefecture, Japan, in 1946. From Wikimedia, Public Domain.

At these repatriation centres, returnees would be received and processed in order to return to their home communities, often to an uncertain future in a Japan struggling to rebuild after a cataclysmic war. For example, many returnees were suspected of being Communist sympathizers after spending long years toiling at forced labour in the Soviet Union:

I’d long had the impression that life was difficult for repatriated Japanese soldiers after WW2, but this 1949 passage from the Nippon Times (Japan Times) is brutal.

End of article blames the Communism, as the returnees had been held in Soviet prison camps. pic.twitter.com/pKfCKrzCDS

The geographically isolated Japanese port of Maizuru, in Kyoto Prefecture on the Japan Sea coast, became host to the sole remaining repatriation centre until it closed its doors in 1958 and large-scale repatriation efforts ended. In total, 346 ships, carrying approximately 660,000 people arrived in Maizuru between 1945 and 1958. 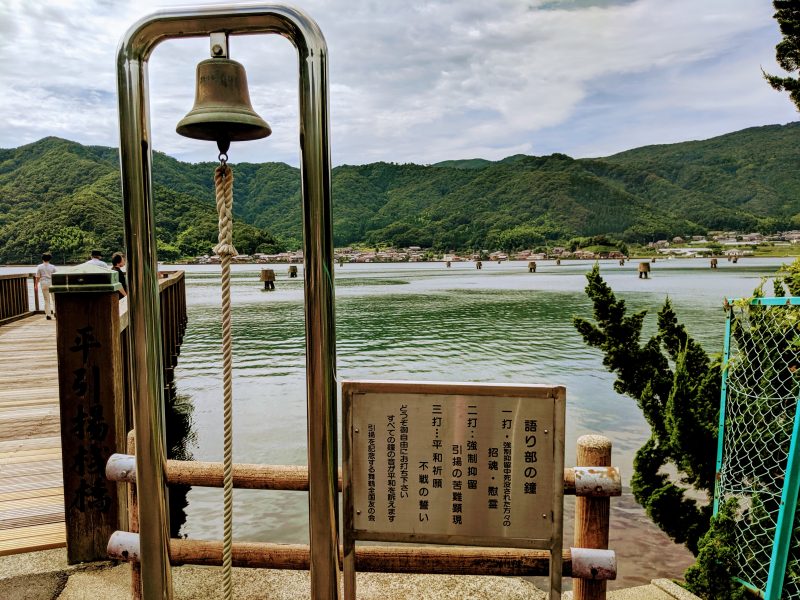 Reconstruction of the pier at the site of the former pier at Maizuru Repatriates Relief Bureau in Taira, Maizuru, Kyoto Prefecture, where returnees were repatriated. Remains of berthing posts can be seen out in the bay. Photo by Nevin Thompson.

Today, the Maizuru Repatriation Memorial Museum in Maizuru, Kyoto, documents the history of internment in the post-war Soviet Union and the repatriation of Japanese soldiers and civilians. The artefacts and displays at the museum include an installation that depicts a relationship between Japan and Uzbekistan that has evolved over time “from detention to (friendly) exchange” (抑留から交流ヘ). In 2020, Maizuru will host the Uzbekistan national Olympic wrestling team. 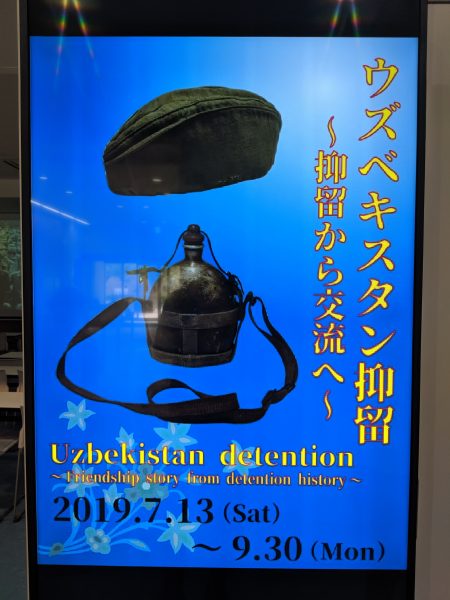 There is also some pride in Japan about the contribution internees made to Uzbekistan. An archived web page on the website of Japanese trading house Marubeni states:

When the great earthquake occurred in 1966 that toppled most of the buildings in the city, only the Navoi Theater escaped unscathed, clearly demonstrating the architectural skills of Japan.