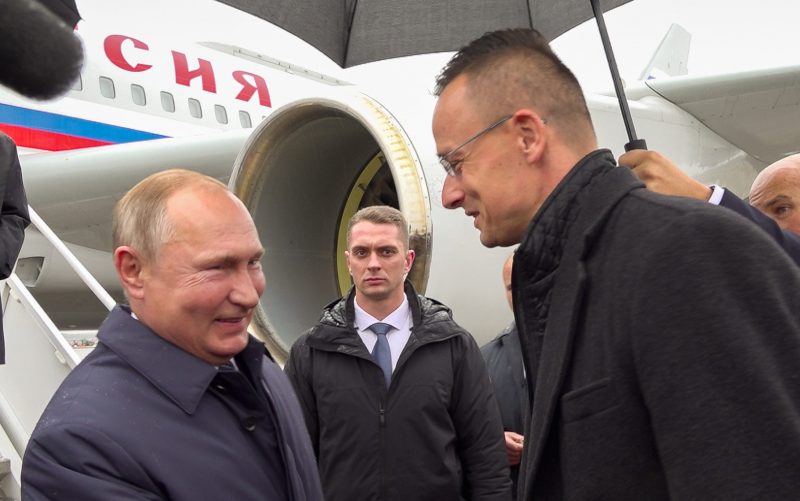 This story was published in by the Hungarian investigative journalism non-profit, Atlatszo [2]. An edited version is published below here as part of a partnership with Global Voices.

Like Hungarian journalists [3] critical of the government, now foreign journalists working in the country are also facing an information blockade. The international press conference held during Putin’s visit to Budapest, on 30 October was not announced prior to the event, the registration process was not made clear, and several foreign journalists did not even know on the day before whether their application to participate was handled at all by the Prime Minister’s office. Some of these correspondents later did get a reply stating that there was no more space at the event due to the great interest of Russian and Hungarian journalists in the press conference.

In the week leading up to Putin's visit, there has been a frequent exchange of messages on the mailing list of foreign journalists working in Hungary about when and where the official press conference was going to take place, and how to apply for the event, as no invitation had been received by the Hungarian International Press Association [4] (HIPA) as an organization, or a significant part of the foreign correspondents accredited to Hungary.

Despite this, several major international news agencies, as they say, ” not easily, but ultimately succeeded” in registering for the international press conference. Others, however, say that this is not the first time that they have a problem attending a press event organized by the Hungarian government. They claim they are regularly informed about such events in the last minute or only afterwards, as if the government was deliberately trying to keep them away.

The German public service media correspondent detailed in a blog post [5] how he tried to get into the Putin visit’s press conference. The excuse he was given for his rejected application was “a lack of space”:

I called the Prime Minister’s Office about a week ago to find out about the visit. Nothing – was the answer. Whatever important events have taken place in recent years, they usually sent out the notice only the day before the deadline for sending the data needed to participate. So, I was not too worried about missing out on something. It turned out I was wrong. To be sure, I sent an email to the Prime Minister’s Office (international press office) on Tuesday morning, and because no reply came, an hour and a half later I also asked the Deputy Secretary of State, Bertalan Havasi by email if there would be accreditation for the event. Shortly afterwards, a lovely lady from the Prime Minister’s office called me to say they had received my letter, but unfortunately they are no longer able to receive registration requests because they had reached the maximum capacity of the venue of the event. I asked how it was possible, since it had not been advertised anywhere, no invitation was received, there was nothing on the event in the official calendar at kormany.gov.hu. I got the answer that the Hungarian and Russian journalists had just registered on their own initiative and there was no more room left.

In the mailing list, another correspondent described how he was also left out of the press conference:

First no emails, then no accreditation invites even from Kovacs’s office (Zoltán Kovács, State Secretary for International Communication), now no posting on the calendar of events on the government’s website, nothing on MTI (the Hungarian News Agency). I guess we’re all expected to be mind readers.

It was also mentioned in the email list that it is actually against the Helsinki Declaration [6], officially known as the Helsinki Final Act [7], resulting from the 1975 conference on security and co-operation in Europe which lead to establishment of the OSCE [8], if a government does not inform foreign correspondents or keeps them away from official press events.

Another journalist accredited to Hungary summed up how he tried to obtain an entry permit for Putin’s press conference:

I started e-mailing the International communications office about this event on the early morning of Oct 25, which already seemed late, but I had been expecting something from them by then and I decided to ask when I realised nothing would be coming. I received a response two minutes later, which said, “Thank you for your inquiry. We will inform you in due course about the details for the registration.” I expected them to keep their word. Yesterday I sent another message, which went unanswered. The message I sent this AM, which was “Since the event is tomorrow I just want to make sure I have been accredited. Can you please send the details?” received a response, which said only “Dear Mr XY, Press Office of the Prime Minister” [an email without contents, just a greeting and a signature]. My further e-mail asking for how to get in touch with them did not receive a response, nor did my emails to bertalan.havasi@mk.gov.hu and ktk@mk.gov.hu asking for accreditation.

Bertalan Havasi is the head of Press Office of the Hungarian government, while ktk@mk.gov.hu is the official email [9] for registration of journalists at governmental media events.

“This case is not unique, the communication between the Hungarian government and foreign correspondents working in the country has become much more difficult lately” – Dutch journalist Runa Hellinga told Atlatszo in a statement. He has been a member (and until last year the President) of the Hungarian foreign journalist organization for 20 years.

It is obvious that HIPA has been hindered in its work since many years. The first years of the Orbán government, they still were willing to send a minister once a while, but nowadays, it has become almost impossible to organize meetings with ministers or government agencies. All applications have to go through Mr. Kovács, who has made it very clear that according to him, HIPA is useless. My personal experience with Kovacs as a spokesman is also a bit awkward to be honest. I once organised an interview with him for a Dutch TV crew. First he simply didn’t turn up, the second time, he had five very impatient minutes for us.

HIPA’s current President, Kester Eddy confirmed this in a statement for Atlatszo::

Since about 2012, and especially since 2014, the Hungarian government has kept the foreign correspondents’ organization at arm’s length as a body. Despite regular invitations, not only does PM Orban not speak to HIPA, but Zoltan Kovács has also rebuffed offers to speak. Also after 2014 until about 2016, the government started some “background” talks for foreign journalists in selected small groups. I don’t know if these are still done. On a personal basis, Zoltan Kovacs’s office have normally answered questions and requests (sent in time) for interviews.