Messages in motion: The art of Swahili sayings on public transport in Zanzibar

'It used to be we'd see these signs everywhere.' 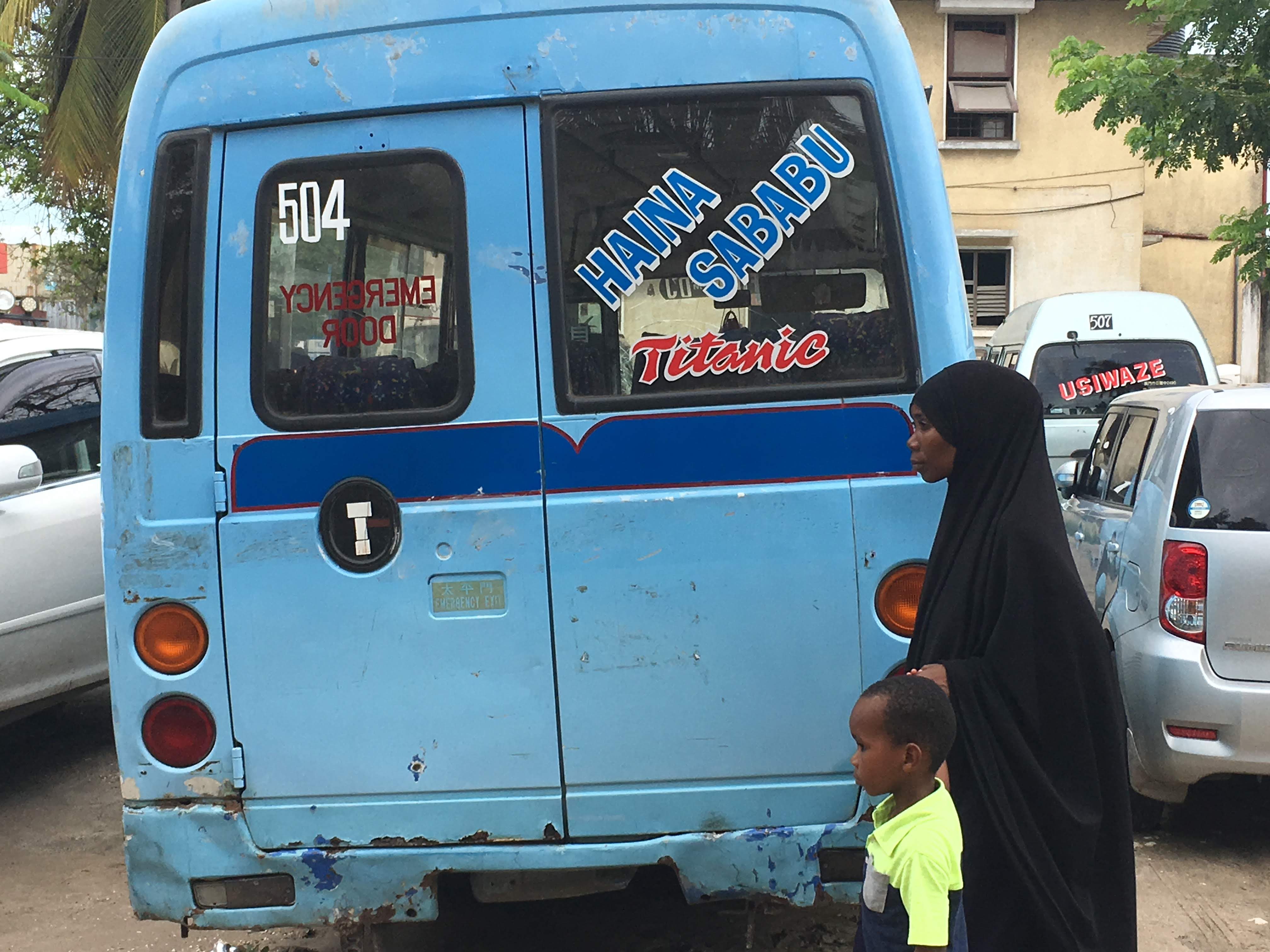 “Haina sababu” or “There is no reason,” written on the back of a blue bus in Stone Town, Zanzibar, October 2019. Photo by Amanda Leigh Lichtenstein, used with permission.

A traffic jam on the islands of Zanzibar often comes with dash of poetry in the form of a msemo (saying) written on the back of a truck, dala-dala (public bus or mini-van) or bajaj. These sayings not only keep passengers distracted and entertained — they also educate. Each one has a literal meaning followed by endless interpretation.

Sometimes these sayings “bless the ride” and “protect the journey,” while others echo layers of sentiment in Swahili society, from street talk to song lyrics, baraza (street bench) philosophy to straight-up old-school wisdom on love, luck, and wealth. They often spark conversation or elicit a big laugh. But it's a dying art form, as more vehicle owners opt for ready-made signage or prefer a “clean look.”

Zanzibar, located in the Indian Ocean just east of mainland Tanzania, boasts a long history of trade and exchange. The Swahili language emerged out of centuries of communication between Arab and Bantu traders and is steeped in metaphors, riddles and rhymes. Swahili speakers enjoy slipping snippets of wisdom into everyday conversation — and popular proverbs are ubiquitous, not just in Zanzibar but also in mainland Tanzania and the region.

“It used to be we'd see these signs everywhere. On the backs of bicycles, dala-dala, everywhere, now not as much anymore, but you still see them,” said Masoud Salim, a businessman in Stone Town, the capital. Messages were often painted by hand by artists who specialize in signage; later, drivers began to order customized stickers produced at a local print shop. Today, it's common to see both handpainted and printed stickers — but not as often.

He says these slogans usually appear on the backs of dala-dala because this form of transport — meant to be the cheapest — often gets the worst rap. The conductors overpack vehicles with weary passengers and hustle customers with rough talk, while the drivers careen at break-neck speeds and overtake smaller cars on treacherous roads riddled with potholes.

Dala-dala owners slap these sayings on the backs of their vehicles as a way to “talk back” to other drivers before they've had a chance to honk or shout a complaint.

Hannah Gibson, a lecturer in linguistics with a focus on Bantu languages and Swahili studies at the University of Essex, points out that people all over the world love to play with language and East Africa is no different:

The dala-dalas and bajajs become like moving canvases. In a world where people may struggle to be heard or seen, this is like having an audience of thousands as vehicles whizz around the city [and throughout the islands].

These signs are a form of collective, social poetry much like the kanga, a colorful textile sold in pairs that comes with a single proverb written along its edge. The kanga message or “name” is often embued with double meanings and plays on words that baffle and delight. In the same way, these little messages on the cars, trucks and bajaj are ways to transmit a set of values, attitudes and desires that reflect the lives of Swahili men — those who mainly “traffic” in this signage.

Here's a look at some of the more compelling messages seen around Zanzibar in October 2019.

Zanzibar roads are rough and drivers can get defensive. This is the offensive approach: 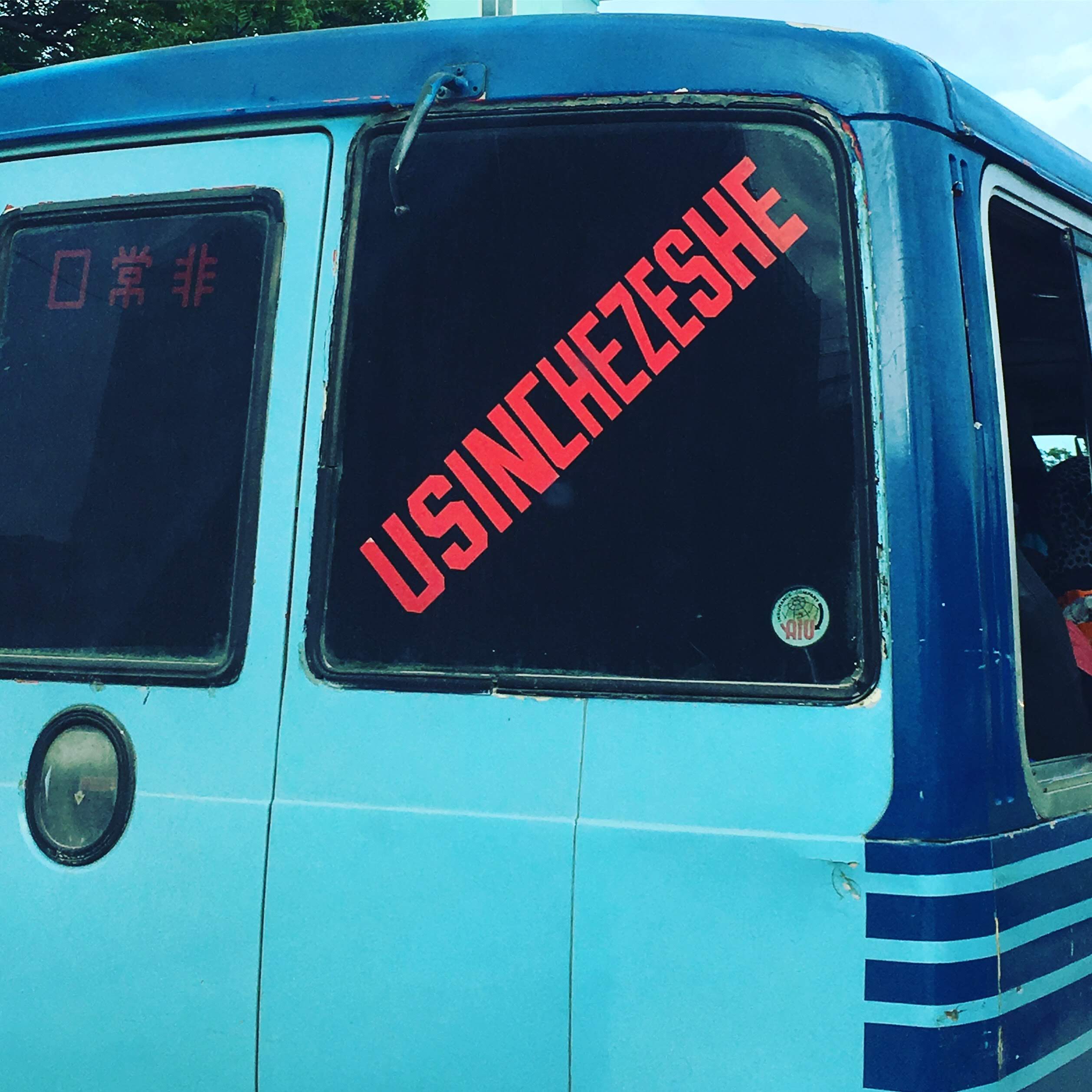 “Usinichezeshe” or “Don't make me play,” seen in red on the back of a blue bus passing by Michenzani flats, Stone Town, Zanzibar, October 2019. Photo by Amanda Leigh Lichtenstein, used with permission.

‘Yep, that's the news, winning is a must’

A daily message to keep that fighting spirit to get where you're going: 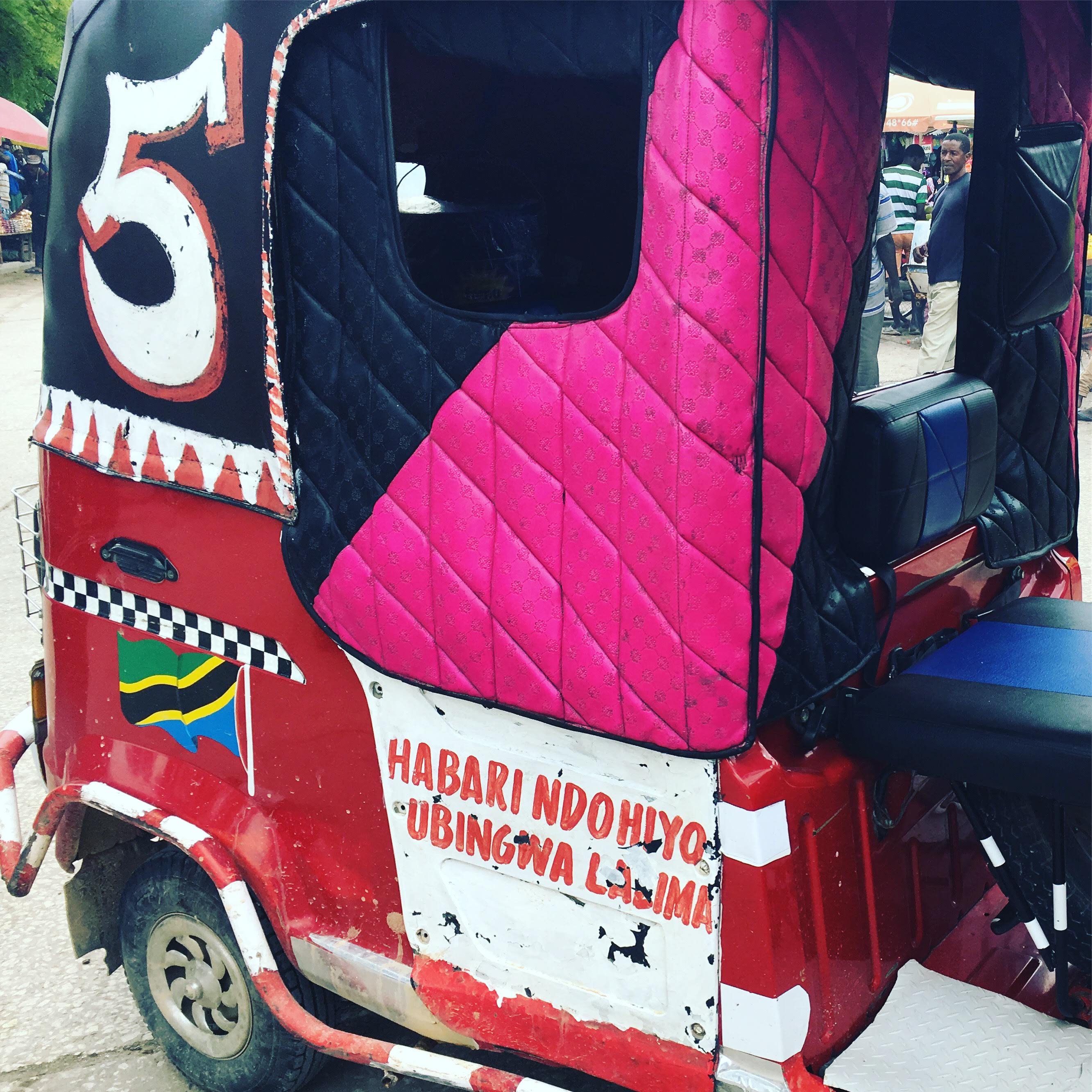 “Habari ndio hiyo ubingwe lazima,” “Yep, that's definitely the news, winning is a must.” Seen on a bajaj in the Darajani market, October 2019. Photo by Amanda Leigh Lichtenstein, used with permission.

Traveling even the shortest distances requires a bit of self-awareness: 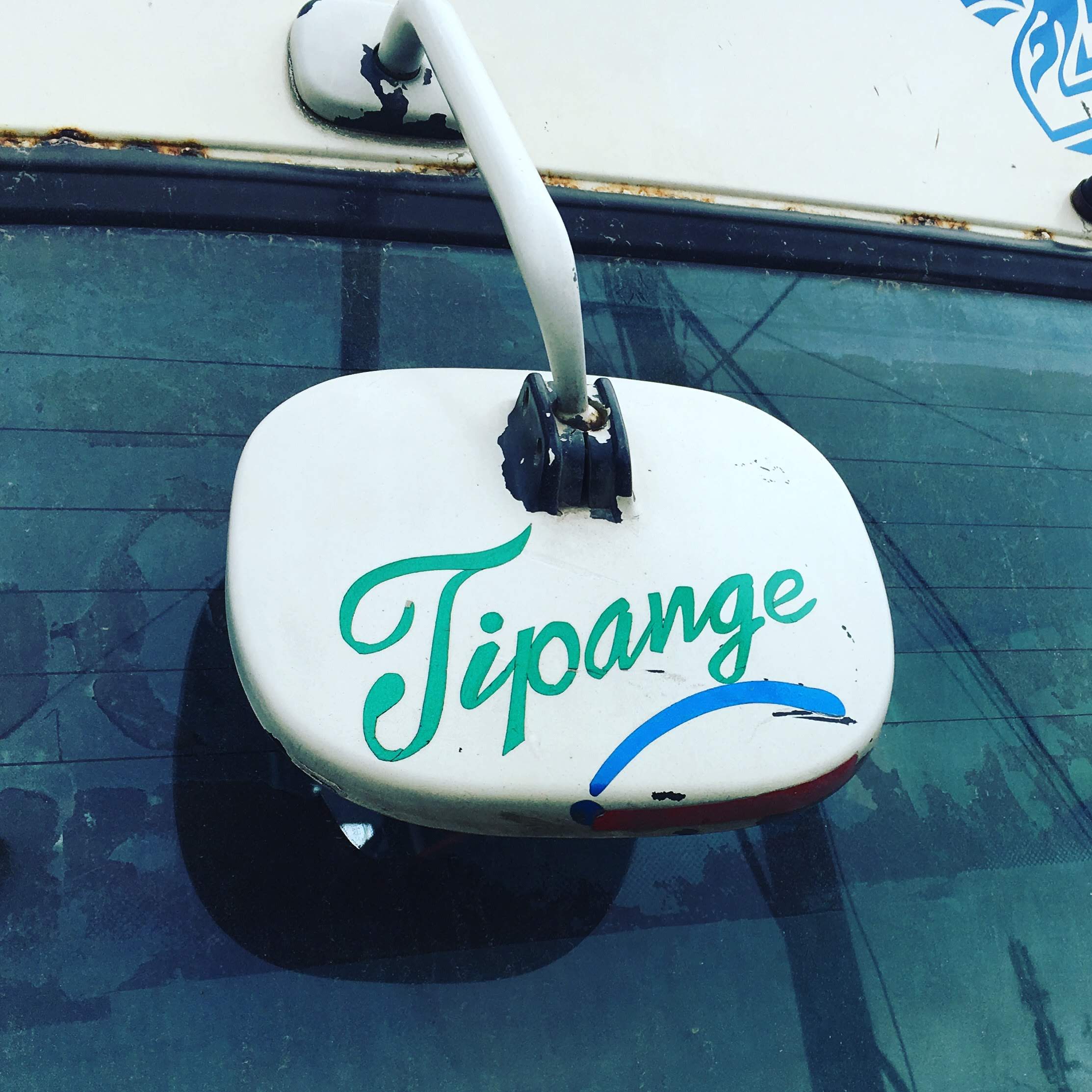 “Jipange” or “Get yourself together,” seen on a van back mirror in Stone Town, Zanzibar, October 2019. Photo by Amanda Leigh Lichtenstein, used with permission.

‘Fight for your life’ 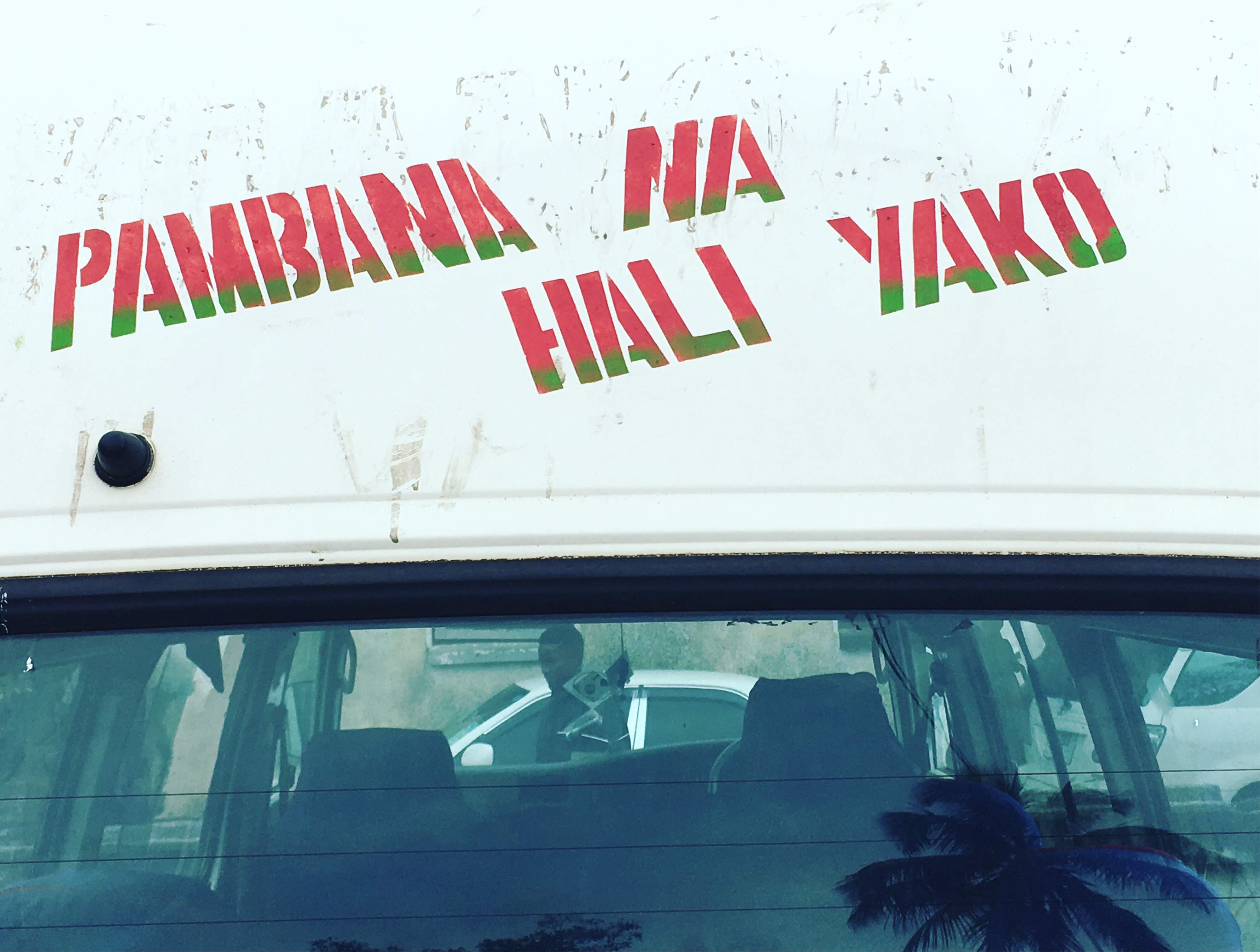 There's a lot we could worry about when heading out on the roads, drivers and passengers alike. Maybe it's best not to dwell on what could go wrong and stay focused on what's right: 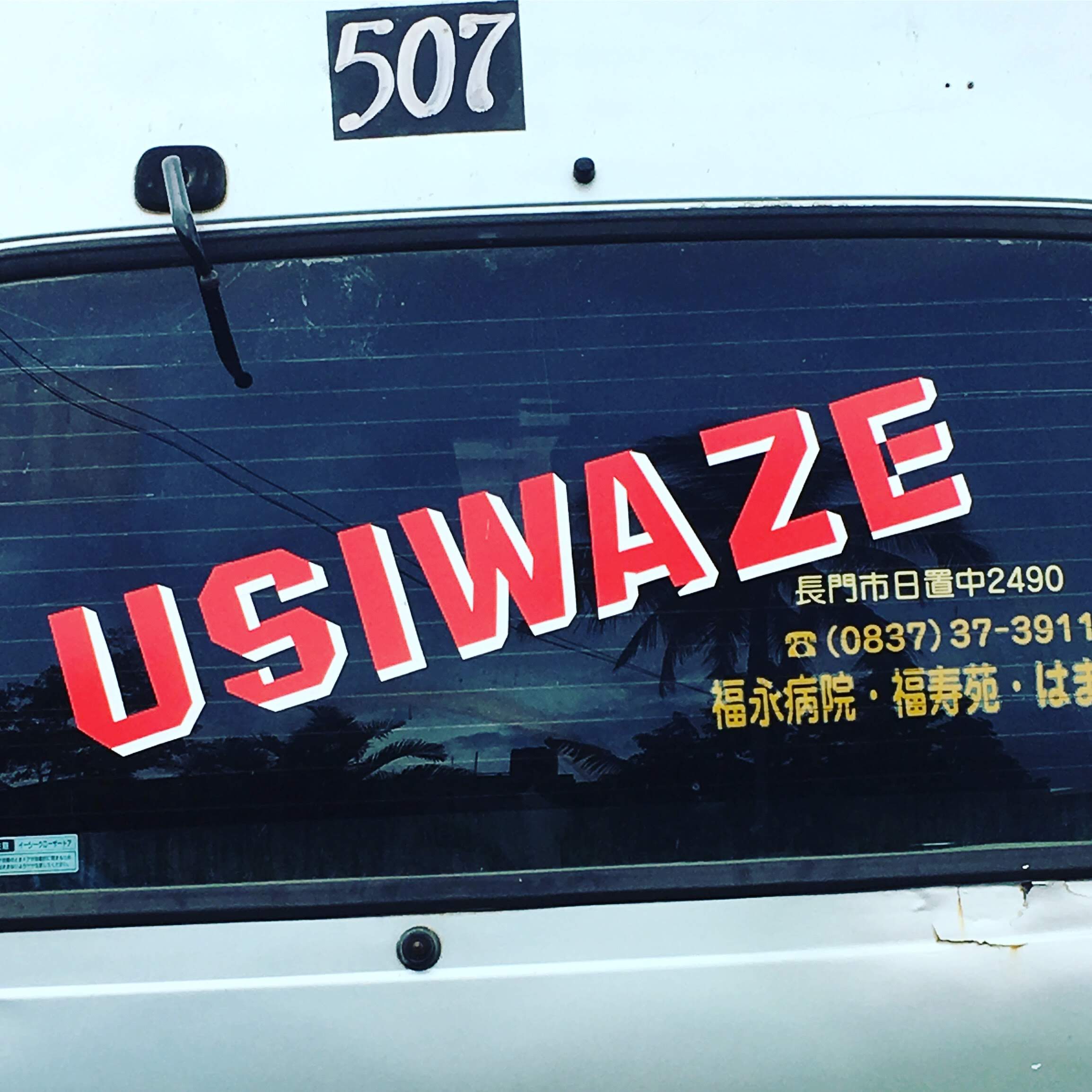 “Usiwaze,” or “Don't think,” written on the back of a mini-van used as public transport in Stone Town, Zanzibar, October 2019. Photo by Amanda Leigh Lichtenstein, used with permission.

‘Time is a problem’

No matter how hard we try to get ahead of time, we often feel there's just not enough of it. A message that signals, perhaps, a reason to pick up the pace a bit: 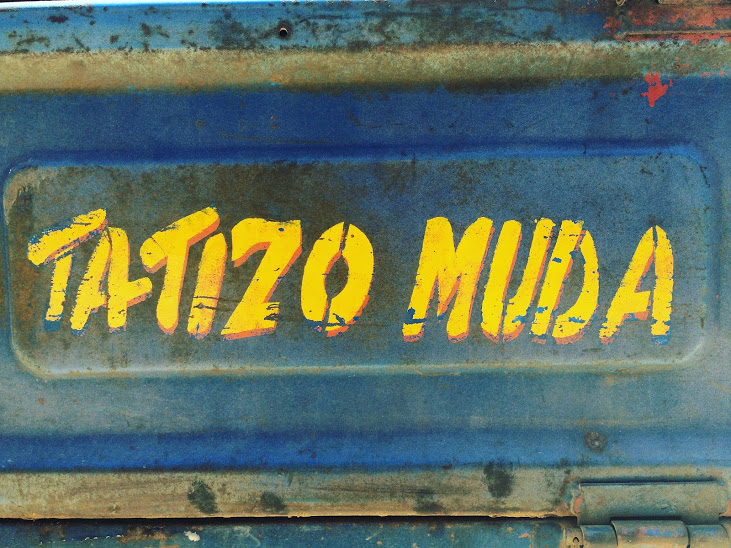 “Tatizo muda” “Time is a problem.” Written on the back of a pick-up truck in Stone Town, Zanzibar. Photo by Amanda Leigh Lichtenstein, used with permission.

‘Lovers if we return’

Getting on the road requires immense focus and risk. There's the promise of love — only once the work is done: 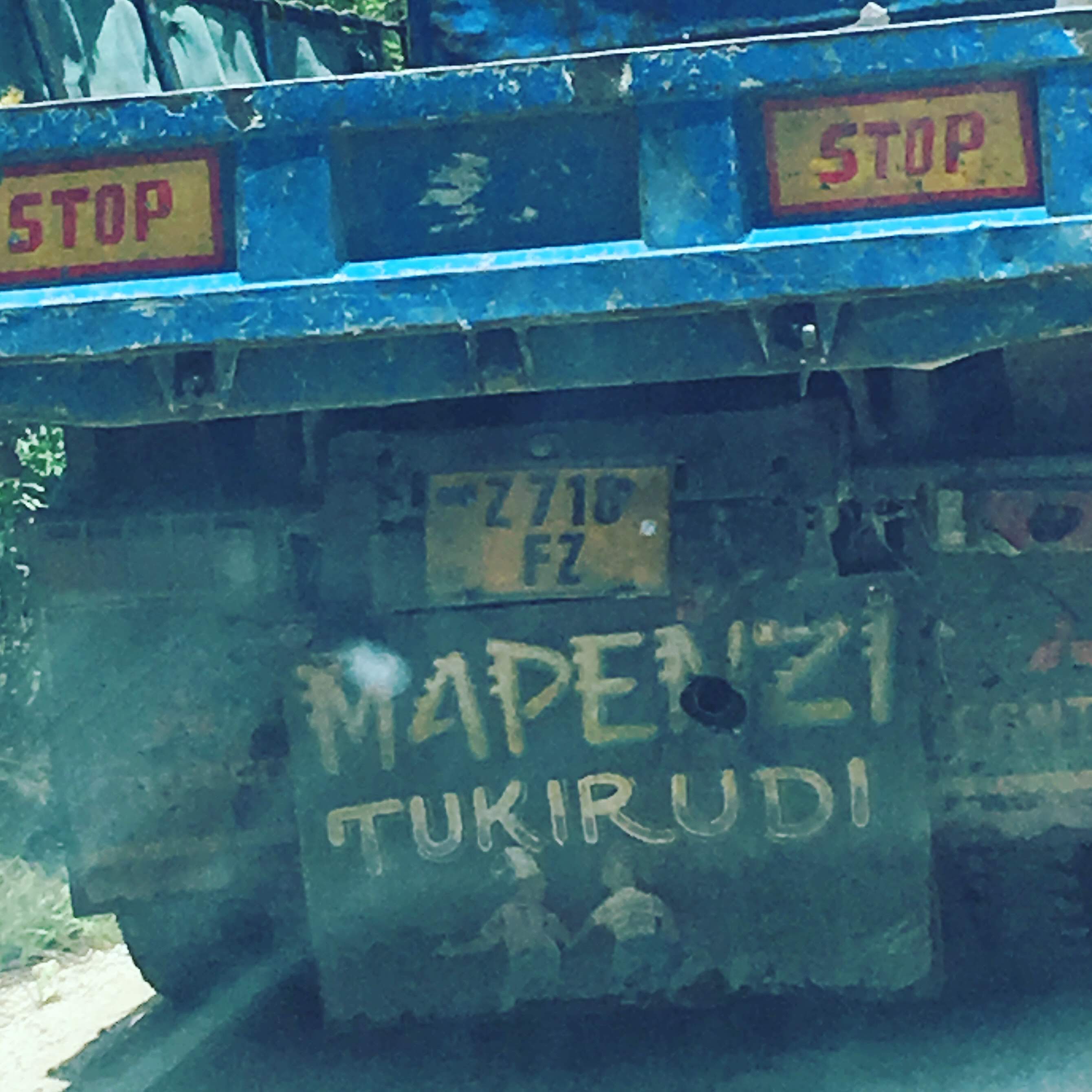 “Mapenzi tukirudi” or “Lovers if we return,” seen on the back of a pickup truck in Bwejuu, Zanzibar, October 2019. Photo by Amanda Leigh Lichtenstein, used with permission.