Police warns that lethal weapons would be used against protesters 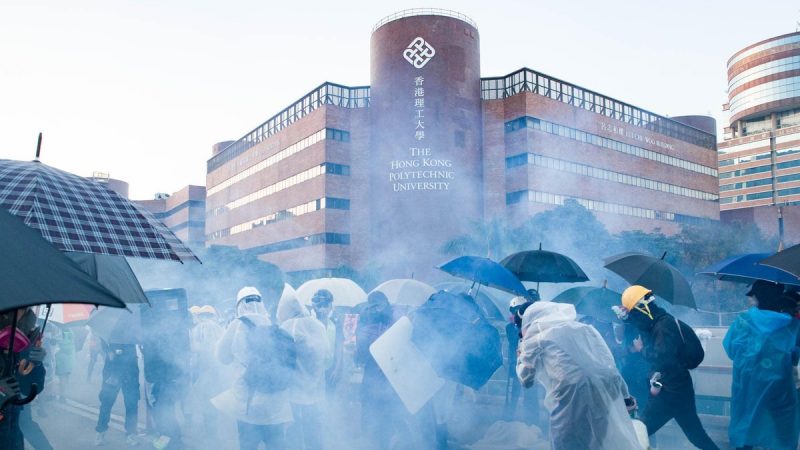 In recent days, a number of university campuses in Hong Kong have turned into major battlegrounds between anti-government protesters and riot police, as Hong Kong enters its eighth month of protests to defend its democratic rule. On November 17, the campus of Hong Kong Polytechnic University became the site of some of the most violent clashes witnessed so far in Hong Kong.

After more than 24 hours of crossfire between riot police officers using tear gas, projectile rounds, water cannons and long-range acoustic devices and protesters’ fire-bombs, bricks and arrows, hundreds were still under siege inside the campus on Monday, November 18.

Since the general strike that started on Monday, November 11, protesters have been attempting to block major roads in order to disrupt traffic to prompt a citywide strike. The disruptive acts led to violent clashes in the Chinese University campus in the area called New Territories in the northeast of Hong Kong between November 11 to November 14. After that, the battlefield gradually shifted to downtown to the Polytechnic University, as its campus is located next to a busy axis of the Hung Hum cross-harbor tunnel.

The clashes took place mostly at the location of two bridges crossing over the cross harbor tunnel highway and connecting the Hung Hom railway station to the university main entrance. Since the beginning of the general strike, protesters have been throwing objects from the bridges to the highway and setting up defense lines near the university entrances.

Tensions escalated on November 17 as the Hong Kong government wanted to restore order in the city after a week of protests and confrontations. The police issued a statement on that day, saying:

Police warn that violent activities in the Hong Kong Polytechnic University have escalated to rioting. Anyone who stays behind or assists rioters may be liable to the offence of ‘Taking Part in a Riot’.

The maximum penalty for rioting is a 10-year imprisonment sentence.

At around 8:30 p.m., riot police advanced forward on the Cheong Wan Road bridge with two armoured trucks. Protesters responded with firebombs, and the police retreated after one of the trucks was set on fire.

The situation intensified after the incident, and the police warned that they would use lethal weapons against violent protesters, calling on people to leave the campus before they took further action. Yet, as the medical team retreated, they were immediately arrested:

At around 2 a.m., a number of lawmakers, church leaders, and university staff attempted to enter the campus to help to de-escalate the tension, but the police refused to let them in.

As the riot police attempted to enter the campus in the early morning of November 18, protesters set various university locations on fire to create barricades:

Photo by hkcnews. Its witness said #HongKong police has stormed into #PolyU campus, where students are still defending themselves with petrol bombs. Online buzz say many were injured by water cannons. Live feeds are scarce as many key local media aren’t inside. #HongKongProtests pic.twitter.com/dXk5sOXefa

Hundreds of protesters inside the campus have kept on fighting the entire night:

0420 at #PolyU
It is almost dawn and they still maintain their belief and determination that people will come forward as reinforcements. They continue to fight for HongKongers.

At the outskirts of the campus, many took to the streets to create roadblocks in order to distract the riot police from taking action against fellow protesters inside the Polytechnic University:

Residents near #PolyU are rushing to the university to save student protesters. As the road to the university has been blocked by police, they are confronting the police in Hung Hom, Mongkok, Yau Ma Tei, Whampoa, Jordan and Tsim Sha Tsui. https://t.co/PbbkOodmst

Hundreds of protesters were still trapped in the university campus on Monday morning. They had made several attempts to break the siege, and while some were successful, others got arrested:

What met the break out group from #PolyU immediately were heavy firing of tear gas and water cannon. While some began to flee back to campus, many tried to hold down. pic.twitter.com/wAwYsLC9s5

Inside the campus, some protesters have been injured, and after many rounds of urgent appeals, medical workers were finally allowed to enter the campus:

At 2pm, almost 18 hours after completely surrounding the PolyU campus, police finally allowed a group of Red Cross volunteers to enter the campus, amid reports of large numbers of seriously wounded.

Protests in Hong Kong have been going on for more than seven months, tension has been escalating but the government seems unable to solve the situation. As one netizen remarks, the Hong Kong Chief Executive Carrie Lam is unable to put an end to the riots:

Good point. Where IS Carrie Lam? Is she even in charge anymore? The HK gov’t has effectively disappeared. PLA soldiers come out on the streets ‘voluntarily’ for clean up — Carrie didn’t make the request. The Siege of PolyU is looking like the battle of El Alamein.Where is Carrie? https://t.co/FXcbez8Ucg