Fear and uncertainty: The life of Georgians in Gali

For ethnic Georgians in breakaway Abkhazia, life is a bureaucratic nightmare 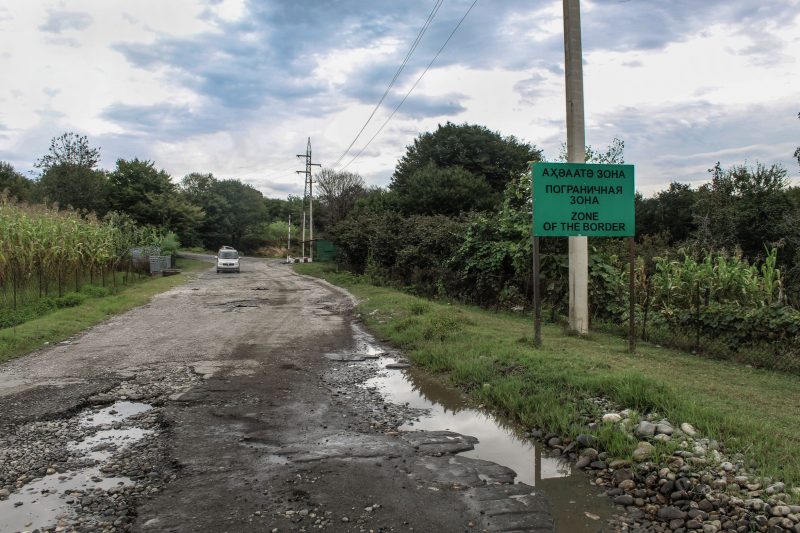 Entering the Gali Region of Abkhazia from the Ingur River crossing. This area is mostly populated by ethnic Georgians. Photo by Chai Khana, used with permission.

The following is a story by Chai-Khana.org and is republished by Global Voices under a partnership agreement

That's the distance that separates ethnic Georgians living in breakaway Abkhazia from Georgian government-controlled territory. It was also the distance separating Badri*, 34, from his wife and children over the summer. It was the distance keeping Nika*, 23, from being able to continue his master's degree studies at university.

Roughly half a mile, or 870 meters, is the length of the bridge across the Inguri River, which is today the only legal crossing point into Georgian-controlled territory. For three months this year, it became a symbol of the insecurities that dominate the lives of an estimated 30,000-40,000 people every single day.

The bridge marks the dividing line between Georgians and Abkhaz, a meandering boundary which appeared following the 1992-1993 Georgian-Abkhaz war after the collapse of the Soviet Union. During the height of the fighting, many ethnic Georgians fled to other parts of the country for safety.

When the fighting ended in 1993, many returned to their homes in Gali district. While they currently make up the majority in the district, they live a life of fear and uncertainty, in part due to the Inguri Bridge. (In 2008, Russia recognised Abkhazia's de-facto independence and continues to support the territory economically and militarily to this day. The vast majority of UN member states recognise Abkhazia as Georgian territory – ed.)

For ethnic Georgians living in Gali, the Inguri bridge represents a path to schools, hospitals, and family. They cross over for cheaper groceries and better quality services, for weddings and funerals. People cross the dividing line every day for different reasons.

And for three months this year, access to the crossing point was closed.

Families were divided. Students struggled to make it to university. Even a simple act like going to a concert became impossible.

While the crossing point is currently open, the three-month restriction on movement has underscored the constant vulnerability of ethnic Georgians living in Abkhazia.

“It was a terrible experience to describe. In July, when schoolchildren in Gali had national exams, parents paid [bribes of] 5,000 roubles ($77), some 10,000 ($155) to cross. I do not want to go back [to Gali] if such practices continue. We are in prison. It is impossible to live in such conditions,” Nika says.

There are the daily injustices, such as the removal of the Georgian language from schools in Gali. And then there are the more fundamental security issues, like not being able to register property, vote or trust that the police will help when you need them.

“Unfortunately, you are not big enough.” It was meant as a joke to the border guard, but it meant that the middle-aged Georgian man (18-65 years) trying to cross the Inguri was not allowed to pass. Or at least, not allowed unless he paid a bribe.

Badri faced that choice regularly over the summer after his children fell ill. Hospitals in Gali lack supplies and modern expertise, so his wife crossed the Inguri to take them to a better hospital in the Georgian capital, Tbilisi. When the Abkhaz authorities closed the crossing in response to protests in Tbilisi in July, Badri was stuck.

For more than three months, male residents of Gali were prevented from crossing the boundary. Although the restrictions were lifted on October 2, the experience has left Gali’s population fearful and frustrated.

Over the past year, the Abkhaz authorities have closed the crossing point twice. When that happens, ethnic Georgians living in Gali have little recourse: either they can try to pay bribes or they can stay at home.

“In order to visit my ill children and wife, who were in hospital in Tbilisi, I had to pay 5,000 roubles ($77) in total. I paid 1,000 roubles ($15) every time I crossed… Is this a life? I nearly went crazy, my children were hooked up to artificial lungs and I couldn’t visit them,” Badri says.

Even the $15 bribe is no guarantee of success. Sometimes border guards take the money, sometimes they do not. The amount is subject to change: Nika had to pay $46 to cross so he could secure his place in a master's degree program.

The decision to close the crossing point was not a novelty: the Abkhaz authorities closed it in January, citing an influenza outbreak in Georgian-controlled territory.

That's why Georgians living in Gali says they have become “prisoners” in their own homes due to a steady flow of decisions by the Abkhaz de-facto authorities that restrict their movements.

The closure was has been so disruptive for Gali residents that in January they even held a rare protest outside the premises of the regional administration. The demonstration even prompted Abkhazia's public defender to speak up on their behalf. Ombudsman Asida Shakril urged the Abkhaz authorities to take into consideration the needs of the communities in Gali.

But locals see little indication that the de-facto authorities in Abkhazia are interested in improving their situation.

Instead, they see a policy aimed at forcing them to abandon their homes in Gali. In 2008, when Russia recognised Abkhaz independence, it became obligatory to obtain an Abkhazian passport or residency card. Prior to that, Soviet passports and, for minors, birth certificates were mainly used as identification.

Ethnic Georgians wait at the police department in Gali to receive their residence permits. The process is long and uncertain. Photo by Chai Khana, used with permission.

Gali residents who did not receive Abkhazian citizenship had to depend on a special form, Form No 9, which had to be renewed every month or two. In some rare cases, it was approved for a six-month term. Locals had to present this document to cross into Georgian-controlled territory.

But obtaining residency – a status legally created for foreigners but applied to ethnic Georgians despite the fact that Gali is their home – is incredibly difficult.

Nani*, 58, lives in Lekukhona, a village in Gali. She has been waiting for her residence permit for two years.

“I, with my three family members, was standing in a queue from the morning until the night for more than two weeks to apply for a residence permit… what is happening here is a nightmare, one without end and one which is getting worse and worse,” she says.

Respondents’ names have been changed to protect their identities. Chai Khana has not published the author's name due to security concerns.