Will Harvard's "additional steps" to atone for slavery include reparations? 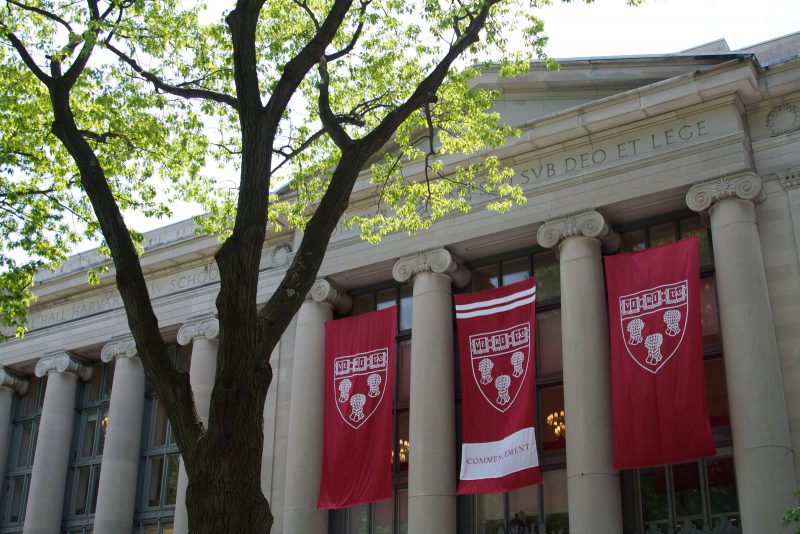 The Harvard Law School Library, decorated for Commencement in 2011, when the contentious Royall seal — a shield with three sheaves of wheat, representative of the donor's connection to slavery — still represented the school. Photo by NKCPhoto, CC BY-NC-ND 2.0.

Three months after the signing of a historic reparations agreement between the University of Glasgow and the University of the West Indies, the prime minister of Antigua and Barbuda, Gaston Browne, wrote to Harvard University President Lawrence Bacow, asking the Ivy league university to live up to its responsibilities and pay his country reparations for the school's historical ties to — and profiteering from — the transatlantic slave trade.

Although the £20 million ($24,308,500 USD) University of Glasgow agreement was the first major act of making amends to the descendants of people enslaved by the British since full emancipation was declared in 1838, and was seen as a symbolic gesture towards the entire Caribbean region, Prime Minister Browne felt that reparations were owed to Antigua and Barbuda specifically, on account of the fact that Isaac Royall Jr., an American slave trader and landowner who also operated in Antigua, bequeathed money to Harvard to establish its first law professorship, which later led to the creation of the Harvard Law School in 1817.

Further, to celebrate the university's tercentenary in 1936, Harvard Law turned Royall's shield into the school's official seal. It proved a hugely controversial decision, due in no small part to the fact that in 1736, Antigua's then colonial government burned at the stake as many as 77 slaves convicted of conspiracy to revolt. In 2016, Harvard students protested to have the crest removed, calling it “a glorification of and a memorial to one of the largest and most brutal slave owners in Massachusetts.”

One opinion piece in The Harvard Crimson, a student-run newspaper, made no bones about calling the Royall family's Antigua sugar plantation “one of the most notorious strongholds of the slave trade”:

In the mid 1730’s, a string of natural disasters, disease outbreaks, and a drought made water scarce on the island. […]

Driven to desperation by starvation and thirst, these brave people made a plan to rebel for their freedom in 1736. The Royall family helped to foil that plan and together with the white, landowning government […] burned 77 human beings at the stake, including Hector, the Royall family’s head slave. Six people were hanged and five people were broken on the wheel.

The horrors of the slave trade often seem to be whitewashed when talk of reparations surfaces, but the editorial was not falling prey to this:

Changing the seal does not take us further away from history. It shows that we truly understand that history and grasp the deep, immoral significance of racism, slavery, torture, and mass murder. […]

Symbols are an expression of who we are as a community, and who we are today is inextricably linked to our history. Symbols that memorialize people like Royall sanitize our history of slavery. If the Law School does not confront its history, then it is contributing to a continuing culture of subjugation and oppression.

The seal was eventually removed, and Harvard's former president, Drew Faust, declared the university's ongoing commitment to acknowledging its ties to slavery, a fact that the current president mentioned in his response to Browne, adding:

Harvard is determined to take additional steps to explore this institution's historical relationship with slavery and the challenging moral questions that arise when confronting past injustices and their legacies. Harvard is also committed to working with other educational institutions to study slavery and its legacy.

What these additional steps are is, at the moment, unclear, but Prime Minister Browne, in keeping with previous letters sent by Antigua and Barbuda’s Ambassador to the United States, Sir Ronald Sanders, is asking for reparations to be put towards education — specifically the University of West Indies at Five Islands:

Ambassador Sanders pointed out that […] the reputation that Harvard enjoys internationally is intertwined with the dark legacy of Royall's Antigua slaves who died in oppression, uncompensated for their lives in slavery and their death in cruelty. In this context, he sought a genuine effort by Harvard to make amends to the people of Antigua for the gains Harvard enjoyed at the expense of their kinfolk.

Brown has suggested that University representatives meet with the government of Antigua and Barbuda to discuss the issue, but thus far there has been no confirmation as to whether or not Harvard intends to follow the example set by the University of Glasgow.

While we agree that Harvard should aspire to atone for its discomfiting history with slavery, we do not believe that pursuing Antiguan-specific reparations is the most efficacious approach. As a university with ties to many historical injustices, Harvard ought not to be pursue debts of symbolic merit. Rather, it should be tackling continued, systematic injustices with broad, systematic solutions. Harvard’s imperative of institutional change dwarfs the particularities of this injustice.

Still, precedent has already been set with the University of Glasgow taking the “moral high ground” with regard to reparations, and the Caribbean community seems to agree that Harvard should also be leading the charge on the issue.

Admitting that Harvard benefited greatly from the backs of slaves in Antigua and making a few token changes to a plaque or a shield does nothing to correct the grave injustice. Harvard now needs to provide true and tangible reparations to Antigua and Barbuda. They can start by making meaningful and measurable assistance to the University of the West Indies campus based in Antigua.