The November 12 clashes at the Chinese University of Hong Kong: An eyewitness view

'Is there a future here?' Well, let’s not forget the future is open. 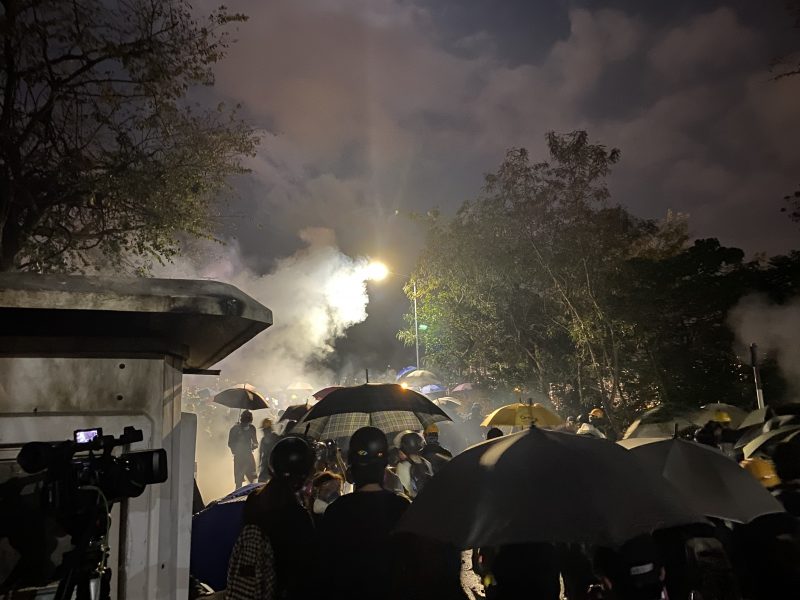 Student activists protect themselves with umbrellas on the campus of the Chinese University of Hong Kong on November 12, 2019. Photo by the author. Used with permission.

Lokman Tsui is an Assistant Professor at the School of Journalism and Communication at Chinese University of Hong Kong (CUKH). This story is an edited version of a post published by Lokman on Facebook, bearing witness to the events surrounding the clash between student activists and police on the CUHK campus on Tuesday, November 12.

On Tuesday, November 12, I was supposed to teach my undergraduate morning class, “development of mass communication,” but classes were all suspended because of the protests.

As I write this, I am sitting in my office. It’s 9am Hong Kong time on November 13. I’ve just brushed my teeth, washed my face, and got myself some tea. Yes, I slept in my office, on the couch. My body feels a bit stiff and tired, and it reminds me of the days I’d go out clubbing until sunrise—except of course I am not that young anymore, nor was I exactly dancing last night.

I shouldn’t complain, because at least I had a couch to sleep on. I don’t know how many students slept outside last night, but by the time I left, around 3am, many were still outside working the supply lines, literally holding down the fort.

The day of November 12 was completely nuts.

It started with the 11am press conference in which I participated. In “normal” times, taking the Department of Justice to court over an injunction seeking to censor online speech would be newsworthy. But yesterday, only a sprinkling of journalists were present. The conference was live-streamed on the news portal HK01, and it got coverage from Apple, RTHK radio, Unwire and some others. But on a day like yesterday, this was not news—and understandably so, with everything else that was happening.

After the press conference, which was held in the Legislative Council Building, I looked for a place to sit down and calm my nerves. I was walking towards Central district. It was almost lunch hour; for the second day in a row, office workers were coming out to protest against the Hong Kong government and the police. In front of Louis Vuitton, people wearing suits and high heels were trying to occupy the road, shouting slogans. Some were kneeling to leverage bricks so we could use them as roadblocks. Others stood on the sky bridge looking down at us, and many were yelling at them to come down and join us, that this is not a movie.

At some point, five high school girls showed up, visibly excited. They started shouting slogans and the rest of the crowd followed suit. Then members of the press started photographing the high-schoolers—inappropriately, as such a record could haunt them later. The girls giggled with embarrassment at first, then moved away; but the photographers followed them. In the end, several of us took out our umbrellas and shielded the girls. We held our umbrellas up for a while until my arm started getting sore. I told the girls to remember not to neglect their studies (when did I become this person?), and we went our own way.

As 2pm neared people began retreating. The lunch hour was over. Only moments before, we’d been standing strong, facing down the police, then abruptly “reality” kicks in, and it is time to go back to the office. I got myself some food and headed home.

That was when I began seeing footage of the scenes at Chinese University of Hong Kong (CUHK)—the university where I teach. Some of my students were tweeting things like “where is the university president, where is the management, where are the teachers?!” I felt terrible. As I responded to friends who were asking me if I was okay, I decided, fuck it—I’m going to campus.

But how? I’m in Sheung San, Hong Kong Island, and my university is in Shatin in the New Territories, some distance away. Traffic is disrupted. Then a friend offers me a ride. We pick up several others along the way, and, with the car loaded, we are off on our way to CUHK, talking along the way about the people we know who have been arrested.

The traffic jam is huge, partly because of road blocks by protesters or police, and partly because it seems like a massive part of Hong Kong is mobilizing to go to CUHK to help out. At a certain point we cannot drive any further as the road is blocked by people and cars all trying to unload and distribute materials, helmets, water, etc. “Please help move stuff, this shit is heavy!” someone yells. I volunteer. I’m handed a big box containing hard hats.

When I go to the university by car it usually takes maybe a few minutes via the Tai Po public road. The road is much longer if you have to walk it, and it feels even longer if you are carrying a big box of hard hats. When I finally reach a supply point I hand over my box, relieved. Where to now? I know the campus, but the updates on the situation are changing fast. I start walking towards where I think most people would be.

Everything after that, the rest of the night, is a bit of a blur.

I remember seeing some friends who recognized me in spite of my helmet, goggles and face mask. Moments like these are really important. Where we say to each other, yes I am here too, yes, we are in this together. You feel the solidarity so vividly and so deeply. We are here in body. We use our hands and arms and feet to help each other.

Students were busy distributing food. Some were working on the supply line. Others were reporting, and yet others trying to mediate between the different parties.

In the midst of all this, I am helping to move stuff, while trying to check in on friends to make sure they’re okay. And all the while my iPhone is being bombarded with messages from friends near and far. I am comfortable telling the closest friends them where I am, but I try to not say too much, lest they worry.

I don’t like telling people where I am going and what I am doing at the protests. I am just one of the people. I am just doing my bit to help, and I often feel I don’t do enough. I’m also careful about who I share this information with, because this stuff is sensitive, especially these days in Hong Kong.

A few more moments that stood out for me:

As the water cannon hits the frontline, many have to retreat, take off their clothes, and recover. “Water” cannon is not quite accurate: the “water” is not only dyed but also laced with some toxic chemical (probably tear gas) that makes your skin feel like it’s on fire. I am taking a break at the stadium, as the students turn on the sprinkler and a massive water party breaks out. It’s a brief moment in which you’re reminded that these are kids, after all. In the midst of it, the first aid crew is yelling for t-shirts and towels. I’d brought two t-shirts with me, and some towels, and hand them all over.

Douglas Adams wrote in his most famous novel that a towel is one of the most useful things you can keep on your person, and it’s true. With a wet towel held against your mouth, you can protect yourself against tear gas. A towel will keep you warm on a cold evening, and you can use it as a blanket when you go to sleep. You can wash with it, or fold it and use it as a pillow. And wave it to signal to someone that you are here and not there. Towels are love, towels are life. Towels are highly underrated.

What gives me some hope is that the students repeatedly give the leadership opportunities to speak, and they listen. But of course, the advice to retreat is not exactly persuasive and the police have already broken several promises that day alone. And can they really depend on the security team that has disappeared over the last two days? (Though to be fair to them, I don’t think they signed up for this).

When you look at media reports you mostly see the violence, the vandalism, the unrest. Rarely the solidarity, or that we are here to protect our home and protect each other. That we refuse to back down in the face of repression and brutality. That we might not always get things right, but that we at least try. And that so far, we have been learning from our mistakes. And that we hope the rest of the world doesn’t make the same mistakes but learns from our experience.

“Is there a future here?” Well, let’s not forget the future is open. It is not set in stone. We don’t know what will happen. And because of this, there is hope. As Leonard Cohen said, “there is a crack in everything, that’s how the light gets in.”

I am grateful Hong Kong is (still relatively) free. I will fight to make sure Hong Kong stays free, becomes more free. I also believe there is much we can learn from Hong Kong, that Hong Kong plays a critical part in the larger struggle for freedom globally. That is why I am in Hong Kong. That is why I want to stay here.

It’s November 2019, and I am here. This is my home. These are my friends, colleagues, students.

Stay strong, stay safe, and be engaged in the way that makes most sense to you.