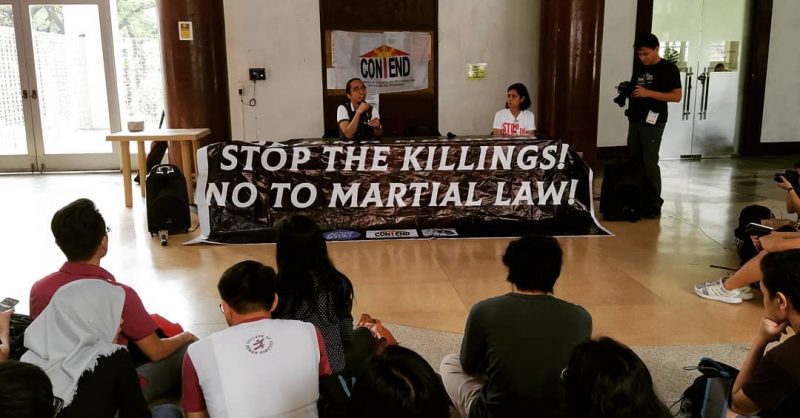 Faculty proponents during the launching of the subject on September 18, 2019. Photo by author

A new General Education (GE) subject that will tackle the dark years of military rule in the Philippines during the Ferdinand Marcos dictatorship will be taught at the Diliman campus of the University of the Philippines (UP) [2], the country’s premier state university.

Philippines Studies 21 (PS 21) [3] tackles the historical experience of repression and resistance under Martial Law as a way of countering attempts by political allies of the late dictator Marcos, including the incumbent Rodrigo Duterte government, to whitewash the crimes, corruption, and rights abuses under the martial law regime.

The new subject will focus on the language, culture, and literature from the Martial Law era. The course title PS 21 was taken from the date of the declaration of Martial Law on September 21, 1972 [4]. Then President Ferdinand Marcos imposed dictatorial rule for 14 years until his overthrow by a popular uprising at EDSA in 1986.

The new subject has stirred controversy as the Marcoses complained that it may be “one-sided” against their family while the armed forces raised the alarm that it would be used as a recruitment tool for “communist rebels”.

PS 21 has been in the works since 2014 when it was first proposed by Philippine Studies professors at the UP Department of Filipino and Philippine Literature (DFPP).

But efforts to institutionalize the subject gained renewed impetus late in 2018 when the issue of UP President Danilo Concepcion dancing with Senator Imee Marcos [5], the eldest daughter of the dead dictator, at a function in the university was reported by the media.

The UP Diliman University Council issued a statement [6] calling for stronger efforts to educate the public on the horrors brought about by the Marcos dictatorship, including the creation of additional subjects in the university.

After passing several steps in the rigorous academic process for approving subjects, PS 21 finally made it through the UP Diliman University Council last September 2019. The proposed syllabus of PS 21 has been uploaded [3] online.

Asked by media about the subject, Senator Imee Marcos appealed that her family's side of the story [7] be included in the course. The PS 21 proponents assured her [8] that the late dictator's speeches and writings legitimizing military rule are indeed part of the subject.

Presidential Spokesperson Salvador Panelo, who served as counsel for the Marcoses in their cases on their ill-gotten wealth, said the subject is a good idea [9]: “Every student should know and learn any subject that concerns governance.”

The Martial Law era remains a contentious topic in the Philippines today. On the one hand, many Filipinos continue to seek justice for those whose rights were violated — the tens of thousands who were imprisoned, tortured, killed, disappeared [10] — by the Marcos regime.

Marcos’ debt-driven development programs and massive corruption favoring his family and cronies have been cited even by mainstream economists [11] for the many ills facing Philippine society today.

On the other hand, human rights activists said that the failure of post-Marcos administrations to convict the dictator's family and his cronies has allowed the Marcoses to return to power. The dictator’s son and namesake Ferdinand “Bongbong” Marcos Jr. almost won the vice-presidency in the 2016 elections [12]. His sister Imee Marcos currently occupies a seat in the senate.

President Duterte, who has openly expressed admiration for Marcos [13], and his officials have been blunt in calling on the public to “move on” from the horrors of dictatorial rule while his officials tout those years as the “Golden Age” of Philippine history.

A propaganda video released by the state-managed Philippine News Agency (PNA) against activist organizations as part of the government's counter-insurgency campaign, for example, praises [14] the Marcos era as the highest point of the country's economy.

Duterte moreover allowed the burial of the body of the dictator at the Libingan ng mga Bayani [15] (Heroes’ Cemetery) on November 18, 2016 sparking indignation and nationwide protests [16]. 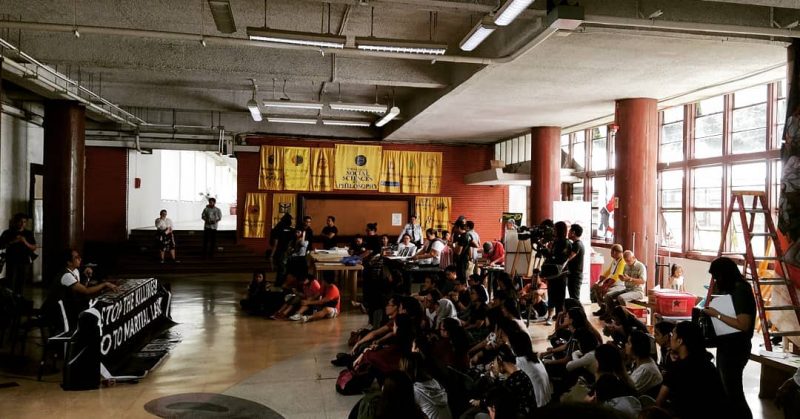 Students listen as proponents explain the rationale and contents of the PS 21 subject during its launching held in UP last September 18, 2019. Photo by author

Ironically, the subject that tackles abuses of the dictatorship is itself now subjected to Marcos era-style repression. PS 21 is yet to be taught but the new subject is already in the cross-hairs of the Duterte government and its armed forces.

The UP Rises Against Tyranny and Dictatorship (UPRISE) network recently condemned [18] the Philippine military for falsely red-tagging the new subject as a recruitment tool for “communist rebels” in a lecture at the Isabela State University Cauayan campus.

UPRISE said that red-tagging is in line with President Duterte's Executive Order No. 70 [21] mandating a “whole-of-nation” approach that synchronizes the activities of all civilian agencies as part of the military's counter-insurgency efforts:

This presentation was made in line with Executive Order no. 70, fronted as a talk on ensuring student safety and security, but is in essence a massive smear campaign against nationalist and critical education espoused by schools and legal organizations.

Senator Bato dela Rosa, who as former police chief was the lead executor of Duterte's “War on Drugs”, is leading a crusade to “save students” against “communist infiltration” [22] in schools and universities.

His Senate Committee Report no.10 proposes school administrators clampdown on “radicalization” thru increased police and military presence in campuses, regular review of academic programs, monitoring of school events, up to the filing of charges against professors. 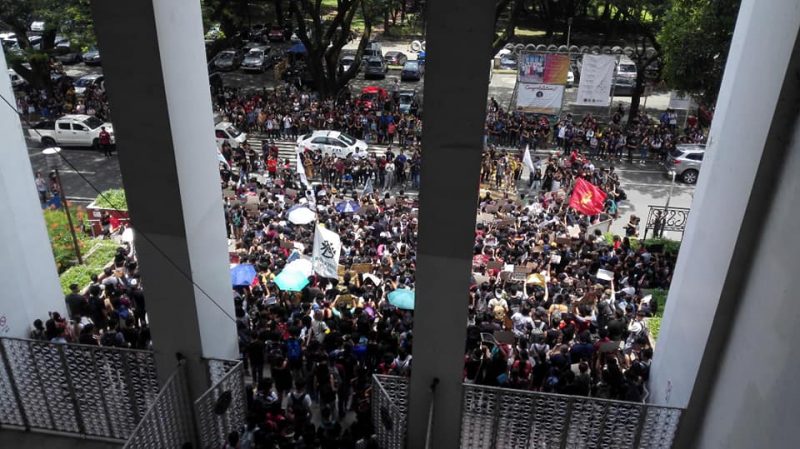 Students, faculty, and employees hold protests last August 20, 2019 at the historic Palma Hall of the University of the Philippines Diliman against the threat of military and police intrusions on campus. Photo by author.

Last October 31, 56 activists in Bacolod City [24], Negros and 2 in Manila City [25] were arrested in raids conducted by Duterte’s security forces on the offices of legal people’s organizations and homes of activists in Negros and the national capital.

This was followed by an early morning November 5 raid on the office of activist group Bayan in Tondo, Manila [26] and threats of state reprisals on legal offices of human rights defenders and progressives.

The crackdown on legal activists who have been the most vocal critics of the Duterte administration has not stopped, with various humanitarian and religious groups included in the military’s list of “communist terrorist groups” [27].

As the current administration intensifies the constriction of democratic spaces in the country [28], the new PS 21 subject hopes to be a platform for the “conscientization” [29] of a new generation of Filipino youth on the importance of human rights, social justice and the continuing struggle for genuine freedom and democracy.

Concerned faculty in other UP campuses outside Diliman are endeavoring to institute the same subject in their respective regions. The proponents hope that the same efforts will be pushed in other schools and universities in the country.

Disclosure: The author teaches Philippine Studies at the UP Diliman Department of Filipino and Philippine Literature.