The fiercest battle took place at the Chinese University of HK 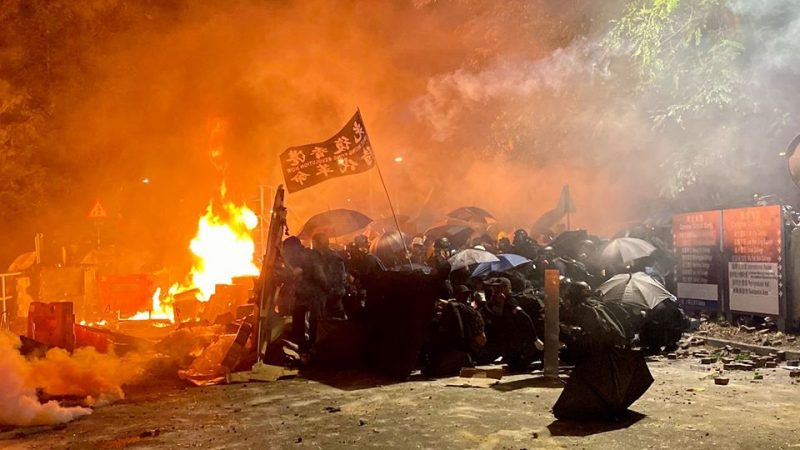 The Hong Kong police turned a number of local university campuses into battlefields as the three-day-long strike from November 11 to 13 heated up. The fiercest battle took place at the Chinese University of Hong Kong in the Shatin district.

The police authorities claimed that protesters from the university had thrown objects onto the railway tracks from a bridge (No.2 bridge) connecting the campus and the Tolo Highway. Yet, instead of safeguarding the bridge, riot police charged into the campus at 3:15 pm, firing tear gas and other less-lethal projectiles for 15 minutes non-stop.

The viral video showed a large number of tear gas was fired into the university’s gymnasium after they forced their way into the campus:

The police authorities justified their move by citing the Public Order Ordinance, claiming that under the ordinance, schools are not considered “private premises” and police officers can enter and make arrests without a warrant.

The university president, Rocky Tuan attempted to de-escalate the tension by going to the front line at around 5pm, suggesting the riot police station themselves at the other end of the bridge while the university security staff station themselves on the campus side. The negotiation failed and the police fired tear gas. The university president left the scene as he had no protective gear. Afterward, students started throwing petrol bombs and bricks at the riot police.

For more than five hours, the frontline of the battlefield looked like this:

After the news about riot police storming the university campus went viral online, a large number of university alumni rushed to the university campus with all kinds of supplies such as food, water, protective gear and medical supplies, etc. For example, former university president Joseph Sung had quickly set up an emergency ward at the gymnasium with about 100 medical experts standing by to treat the injured. At around 10:30 pm, the riot police retreated.

More than 100 people were injured with one in serious condition after being shot by a rubber bullet in the head. The police admitted that they had fired 1567 tear gas canisters, 1312 rubber bullet rounds and 380 bean bags in a single day on November 12. Students from Chinese University have collected 2356 rubber bullet shells on the battleground in campus:

On November 13, the president of the Chinese University of Hong Kong’s (CUHK) student union applied for an interim injunction to ban police from entering the campus without a warrant, as well as banning the use of crowd control weapons on-site without the school’s approval, but the High court judge rejected the injunction .

Clashes between police and student activists started the first day of the general strike on November 11 as some protesters attempted to create roadblocks to disrupt traffic. The action, which called on students to boycott classes, business owners to close shops and employees to skip work, is to pressure the government to respond to the protester's major demands: Independent investigation of police violence, removal of riot label, dropped charges against protesters, and political reform.