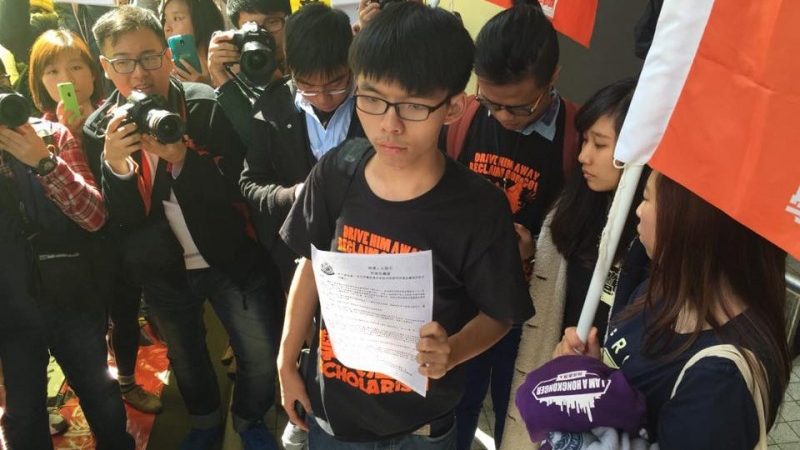 This edited article is from Prachatai, an independent news site in Thailand, and is republished on Global Voices as part of a content-sharing agreement. In this interview, Joshua Wong responds to the allegations by Thai army chief Apirat Kongsompong that he visited Thailand many times and that he has been inciting young Thais to protest.

“If we are in a new cold war, Hong Kong is the new Berlin.” A video of Joshua Wong giving this statement in Germany was played at a lecture given to military students by General Apirat Kongsompong, Thai Royal Army Chief on 11 October 2019.

During the lecture, Apirat said that Thailand has lost territory 14 times and survived the cold war, but now it is facing new security challenges, articulated in the video. “I would like to pause at the picture of this person for a moment. This picture shows Joshua Wong, he is a leader who said ‘If we are in a new cold war, Hong Kong is the new Berlin’. I did not say it, Mr. Wong said it,” said Apirat.

Then Gen Apirat went on to make comparisons between Thai and Hong Kong youth and made allegations against Joshua Wong by trying to make connections between him and Thanathorn Juangroongruangkit, the leader of the Future Forward Party.

First of all, Hong Kong is an island. Now it is properly a part of China. Everybody sitting here may have been to Hong Kong, an attractive city and a city for shopping. But I ask what happened to make it that today no one wants to go to Hong Kong? But somebody went there, and took a picture and posted it for us to see.

(Thanathorn Juangroongruangkit said earlier that he went to an Open Future Festival organized by the Economist in Hong Kong, where he met Joshua Wong and had a brief talk with him for 5 minutes. The picture taken at that time was leaked, leading to criticism by many that it was an unpatriotic and interventionist act.)

[READ: For additional context, read Global Voices’ special coverage about the rise to power of the Thai military after the coup in 2014 and the continuing campaign for democratic reforms by various political forces, including student and youth activist groups]

Apirat’s talk about Hong Kong went on for several minutes making many claims:

“Joshua Wong came to Thailand for I don’t know how many times. Who did he meet? What kind of people did he meet? When they met, what was the secret agenda? Were they conspiring to do something? Plus, there is also a visit which looks like encouragement, support.”

“Importantly, the people who came out were all young. I’d like to ask young students if one day some disappointed people, instigators and agitators, people who use social media, people who use propaganda, come to brainwash you to go out like in Hong Kong, would you do it? Given pictures of the incidents of burning the city in 2010 – 2011, I feel that young students are very susceptible, and must be strong citizens who will have to know the truth.”

The lecture prompted the parliamentary Committee on National Security to call Apirat to attend an investigative hearing. The committee preferred it to be a confidential hearing. However, a response from Joshua Wong himself is also important. Prachatai contacted Joshua Wong by email and we have received a 10-minute audio file answering our interview questions about the latest situation in Hong Kong.

Prachatai (P): Can you update us about the Hong Kong protest?

Joshua Wong (JW): The Hong Kong protests have continued for more than four months, which shows our discontent and our course on free election and democracy. When the Hong Kong government turns such a global city into a police state with mob violence, it will just trigger more people with solidarity.

P: The Thai Army Chief mentioned you a lot recently. He said that Hong Kong is already a part of China. Can you give us your comments?

JW: Even [if] Hong Kong is under the rule of Beijing, we should deserve autonomy and that’s the promise of the Sino-British joint declaration. That’s the international treaty registered in the United Nations. I wish [the] Thai Army Chief could realize the importance of guarantee[ing] people freedom and democracy and human rights. Those are the universal value[s] that we believe in.

P: He said that Hong Kong is suffering from the protests and asked Thai youth not to do the same. Could you please comment on this?

JW: Hong Kong is suffering from the threat from Beijing. And when the Army Chief asked Thai youth not to do the same, my only response is if the government in Thai[land] does the same, the youth in Thai[land] they will do the same as Hong Kong youngsters did in the past four months. So it depends on the authorities instead of depend[ing] on us.

P: The Thai Army Chief said that you have been to Thailand many times and did not know who you met with and what your agenda was. Have you paid a visit to Thailand? ​

JW: I have never visited Thailand in the past few years, especially after being detained in Bangkok airport and being blacklisted by the Thai government in 2016. So, it is fake news. And it is a fake accusation to say that I have been to Thailand many times. The only travel to Thailand for me was [when I was] around 10-years-old having a family trip with my parents to Bangkok and that’s all.

P: Thanathorn Juangroongruangkit, the leader of opposition in Thailand, is under attack because he recently took a picture with you and talked with you for 5 minutes. What are your thoughts on this?

JW: And the future of Hong Kong should be in the hand[s] of Hong Kong people. We deserve the right to determine our own destiny instead of being dominated by the authorities. We just hope that Hong Kong can be the place with freedom and democracy. And we can be the one [who] could determine our own future when Hong Kong is suffering. In fact, more than three thousand activists were arrested, and activists face sexual harassment, and torture in police station[s]. Not only protesters, even first aid workers, journalists, and nurse[s] or doctors were all arrested. Which just shows the crackdown on human rights.