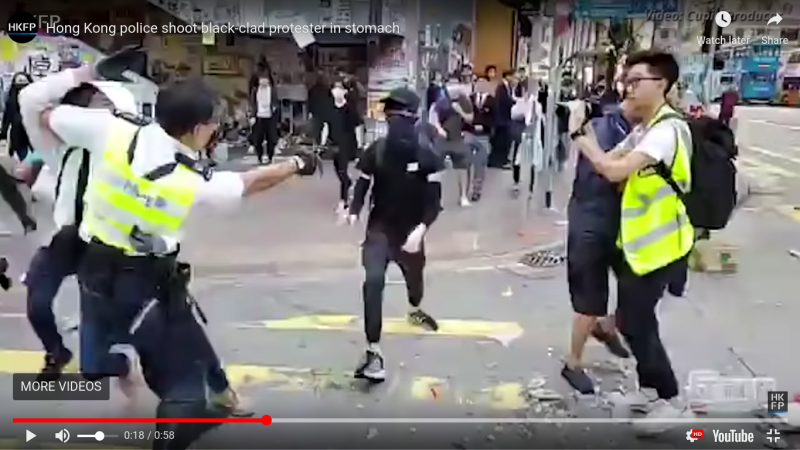 The following post is a round-up of a series of reports written by several contributors of the free online news platform the Hong Kong Free Press at different dates. Those include: Kris Cheng on November 11 and November 9, Holmes Chan and Jennifer Creery on November 9 and Holmes Chan on November 9. It is published on Global Voices under a content partnership agreement. We warn our readers that some of the videos in this article include graphic content.

The Hong Kong police, often regarded as the most trusted in the region, have lost their reputation as several serious instances of violence and violation of their own rules are now coming to the surface, while Hong Kong enters its eighth month of protests against government policies curbing democratic rights.

Protesters were blocking roads outside an exit of the Sai Wan Ho subway station. At around 7:15 a.m., a police officer tried to chase pedestrians, then pulled out a service pistol and pointed it at them, according to footage captured by Cupid Producer. He then grabbed a protester in white, and shot another black-clad protester in the stomach at close range.

The shooting of unarmed protesters

Another protester in black then appeared to try and grab the officer’s gun, as he fired two more shots.

Bloodstains were seen on the ground as the two were subdued. One protester appeared to be conscious, as he responded when he asked his name. The other protester, however, was unresponsive.

Passersby then argued with police and riot police fired pepper spray. A woman tried to get close to the unconscious protester, but was wrestled down by another riot officer.

The two protesters were later taken away in an ambulance.

Protesters across Hong Kong tried to disrupt the morning commute on Monday November 11 as part of a wider plan to mobilise people for a general strike. Arrests were made across Hong Kong, including in Tuen Mun, Wong Tai Sin and Sha Tin. Mass Transit Railways (MTR )services were disrupted on several major lines, including the Kwun Tong Line, Tung Chung Line, East Rail Line, and the Ma On Shan Line. Light rail services were also affected.

Protests escalated following the death of a university student

Demonstrators have vowed an escalation following the death on November 3 of 22-year-old Alex Chow Tsz-lok, who succumbed to his injuries after falling one story in a car park. While the cause of Chow’s death remains unclear, riot police were conducting dispersal operations nearby at the time of his fall on November 3 around 1 a.m. 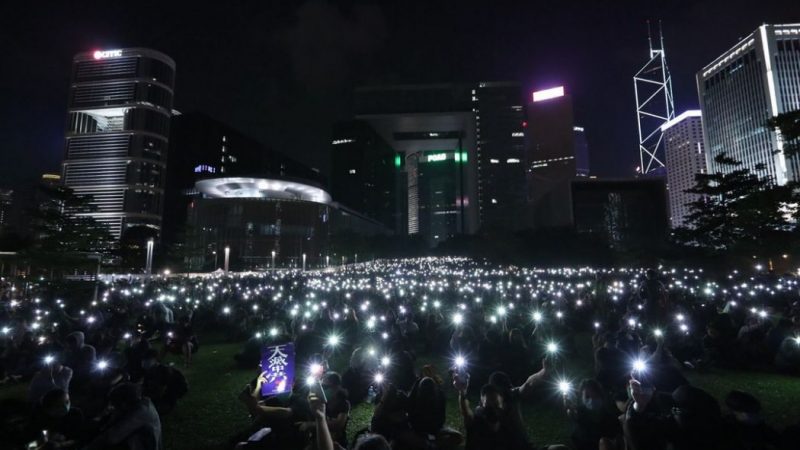 A number of medical workers commented that Chow's injury was suspicious as all fractures appeared on his head and hip bones. A prominent brain surgery doctor believed that Chow might have been unconscious during the fall as the height of his fall was just four meters, and a conscious jump or fall would have more likely resulted in fractured bones on his arms and legs in a standard situation.

On November 9, thousands of people gathered outside the government headquarters to mourn over Chow's death. They expressed their belief that the government and the riot police should be held accountable for his death. A 40-year-old office worker told HKFP at the vigil:

This shouldn’t have happened. I want to know the truth. Even though the police tried to say it had nothing to do with them, I don’t believe it, I don’t buy it at all. They have really lost their credibility.

Alleged gang rape by four at the police station

Outrage grew as the public heard for the first time of an accusation of a gang rape inside a police station in Tsuen Wan back in September. The police force has since confirmed that they had received such a complaint on October 22, but claimed that the allegations did not match investigation results.

Details of the gang rape allegations were first leaked online, and were later followed up and unveiled by Apple Daily news. The alleged victim is an 18-year-old woman who received an abortion at the Queen Elizabeth Hospital on November 5.

Reportedly, the woman was stopped when she was walking past the Tsuen Wan district police station in mid-September. Despite the fact she did not wear black (most protesters wear black clothes to express their political views) and did not perform any act of protest, she was allegedly taken inside the station and gang-raped by four masked men.

The Apple Daily report said the woman displayed symptoms of depression after the incident, and was initially hesitant to file a complaint to the police. She discovered she was pregnant after a hospital visit in mid-October, and told medical staff about her experience while accompanied by her mother.

A Facebook page, HA secrets, administered by public hospital workers leaked that fetal DNA had been gathered as evidence to identify the perpetrator.

International experts call for an independent investigation of police's actions

Surveys show that the majority of Hong Kong people do not trust the police force and demand an independent investigation on police's abusive use of force.

Professor Clifford Stott, Dean for Research Faculty of Natural Sciences of Keele University in the United Kingdom, is one of the five members in the international experts’ panel which was set up in early September to assist IPCC in its thematic study of the protests.

On November 9, Cliff Stott, one of the five members of the international experts’ panel for Hong Kong Independent Police Complaints Council (IPCC) that was set to assist the IPPC itself spoke up. He made a statement on Twitter saying that the current mechanism under IPCC lacks power, and urged for a more comprehensive investigation by an independent group with requisite powers:

International Experts Panel for Hong Kong Independent Police Complaints Council study into the disturbances concludes a need to substantially enhance IPCC capacity, which if addressed may allow their Thematic Study to provide a compelling case for next steps. pic.twitter.com/mMw4lQiUuU