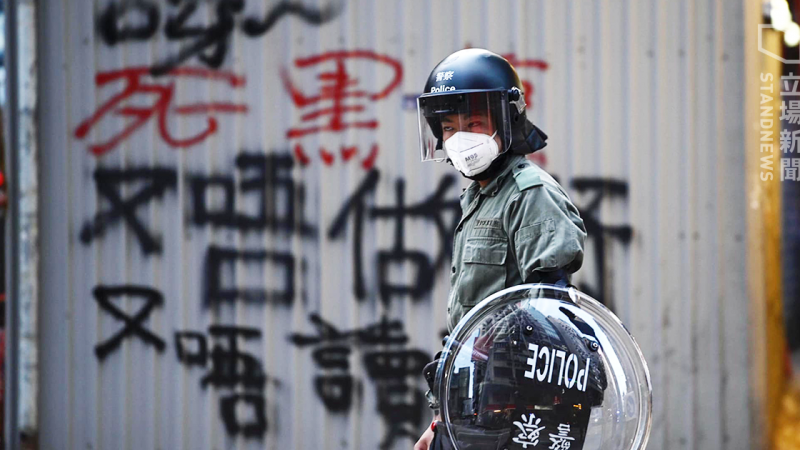 Graffiti behind the riot police was a mockery of “uneducated bad cop”. Image from the Stand News.

The Hong Kong police force, which had been crowned Asia's finest since the 1980s, has faced a massive loss of public support since the anti-extradition protests broke out in June. Currently, more than half of the city's population has zero trust in the police force according to an ongoing poll conducted by the Center for Communication and Public Opinion Survey of the Chinese University of Hong Kong (CUHK).

Police brutality has turned one demand into five demands

As pointed out by Martin Purbrick, a former Hong Kong police officer in counter-terrorism intelligence, in a research paper published in mid-October, the political chaos in Hong Kong is related the “indiscriminate use of force” by the police against “the entire protest crowd of several tens of thousands” rather than the few hundreds who had instigated the violence. The landmark incident took place on June 12 when the police fired more than 150 rounds of tear gas at the protesting crowds and labelled the protest a “riot”, an offence that carries a maximum penalty conviction of ten years imprisonment.

From that day on, the single protest demand, withdrawal of the extradition bill, has evolved into five demands: an independent investigation of the abusive use of force by Hong Kong police, withdrawal of the riot label, amnesty for those arrested, and universal suffrage of the Legislative Council and the Chief Executives.

As indicated by the CUHK's ongoing poll which has started in May, prior to the anti-extradition protests, the zero-trust rate was just 6.5 percent and less than 30 percent expressed distrust against the city's police force. After June 12, the zero-trust rate surged to 22.5 percent but the majority of the respondents still trusted the police. The research center has thus far conducted five rounds of telephone surveys through random sampling and respondents were asked to rate their trust on the police from zero (weak) to ten (strong) among other questions. Leung Kai Chi, a member of the research team, summed up the five rounds:

Latest Poll: 51.5% say they have ZERO trust in HK Police. More than half for the first time. Over 70% say they don’t trust the police. We are now running a gigantic social experience of “violence without legitimacy in a global city”. #StandwithHK pic.twitter.com/HHokNITds0

Only after the Yuen Long mob attack incident on July 21 did public support for the police took a more serious dive. The CUHK's results align with another poll conducted by Hong Kong Public Opinion Institute from 24-26 July 2019, in which 79 percent of respondents supported the setting up of an independent investigation commission with 73 percent supporting the complete withdrawal of the bill.

While the survey results imply that the “indiscriminate use of force” on June 12 was perceived as a mistake in judgment, the absence of police force during the pro-Beijing mob attack in Yuen Long and the government's refusal to investigate on the police's misconduct has ruined public trust in the police.

Absence of justice and lawless chaos

The attacks against protesters by Beijing supporters recurred and on a number of occasions, including Tsuen Wan and North Point mob attacks, the riot police did not take action to stop pro-Beijing protesters from their aggressive tactics. On the other hand, the attacks resulted in a number of injuries. Below is a list of cases:

The emergence of vigilantism

As protesters have lost trust in the police force, the radical ones have taken self-defensive measures to fight back, with some measures taking the form of vigilantism. For example, on October 8, after a taxi driver crashed his vehicle into protest crowds and injured at least one female protester in Cheung Sha Wan, the driver was beaten severely on the spot and hospitalized. After the incident, a pro-Beijing and support police organization donated half a million Hong Kong dollars, approximately US$ 68,000 dollars to the taxi driver while a 20-year-old anti-government protester who appeared at the car crash spot was arrested for rioting.

More than half of the respondents in CUHK's survey accepted the radical act of justice outside the rule of law:

Are people ok with vigilantism? Apparently yes. Ppl have no trust in the police now, so it is ok to resolve things themselves. But only to put ppl under control, though. #StandwithHK pic.twitter.com/udEkhBubOJ

At the same time, the riot police have become more aggressive in clamping down on protests since August. One of the most violent scenes took place as the riot police stormed the Prince Edward subway station with batons and pepper spray, indiscriminately arresting passengers inside the station on August 31 after an “authorized rally” that took place on the Hong Kong Island side.

In reaction to police brutality, a vicious cycle of violence emerged in September. Protesters threw firebombs as the police fired tear gas and deployed rubber bullets. However, people's opinions did not shift. In fact, more respondents found protester-led escalation of violence to be “understandable”:

After a month of vandalism and firebombs, figures on protest violence surprisingly did not change much (within margin of error). Possible explanation: ppl are so upset with police brutality that the increased protest violence is acceptable. #StandwithHK pic.twitter.com/ciQ9N0F1vp

On the other hand, people are more skeptical of police operations as indicated in their perception of the shooting of a teenage protester with real bullets at close range in Tsuen Wan on October 1:

How about the live round in Tsuen Wan? Overwhelming response: the police made a mistake. #StandwithHK pic.twitter.com/bu8Z99CYm5

By mid-October, 51.5 percent of respondents from CUHK's survey expressed zero-trust in the police. The proposal of a large scale restructuring of the police force, which was put forward by the activists after the August 31 Prince Edward station incident, has gained strong public support according to the same survey. The CUHK's poll in October showed almost 70 percent of respondents supported radical reform of the city's police:

This is the first time we ask a question on “large scale restructuring” of the police force, sometimes referred to as “the sixth demand”. The result is a resounding yes. #StandwithHK pic.twitter.com/UEzIBpINlz

The Hong Kong government has not taken any measures to address the police trust crisis. On the contrary, Chief Executive Carrie Lam has invoked the Emergency Ordinance and enacted an Anti-Mask Law, both of which have given the city police force unrestrained power to clamp down on protests.

The four-month-long protests have resulted in 1,235 injured citizens. In addition, 300-400 protesters have received medical treatment at underground clinics for fear of being arrested at the hospitals. The police have fired nearly 6000 tear gas canisters and arrested more than 3,000 protesters. One-third of those arrested are students.