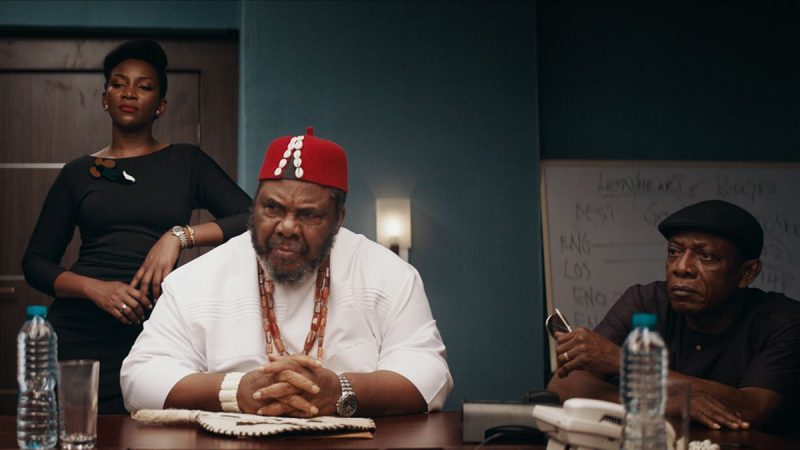 Screenshot of a scene from “Lionheart,” a 2018 Nigerian movie directed by Genevieve Nnaji that screens on Netflix.

On November 4, the United States-based Academy Awards or the Oscars [1] disqualified Nigeria’s first-ever submission in the Best International Feature Film category. “Lionheart,” [2] a 2018 drama now streaming on Netflix, was found to be “ineligible to compete” because it was “largely in English” reports [3] the Wrap, an online media platform.

There are over 500 languages spoken in Nigeria, a former British colony where the national language is English. The characters in “Lionheart” speak a style of English unique to Nigeria. This disqualification has ignited a conversation about whether or not Nigerian English can be considered a different language distinct from British or American English.

“Lionheart,” directed by Genevieve Nnaji [4], is currently streaming on [5] Netflix. In the movie, the “ultra-capable female” Adaeze [Nnaji] struggles to keep her father's transport company alive “in a sexism-driven industry,” an LA Times review [6] writes. “Adaeze, in Nnaji’s hands, quickly becomes an appealing 21st-century global heroine, an exasperated but honest striver in the peculiar bind of fighting literal patriarchy while also respecting a legacy she’d like to continue.”

In response to the disqualification, Nnaji tweeted:

1/1 1/2 Thank you so much @ava [7]❤️.
I am the director of Lionheart. This movie represents the way we speak as Nigerians. This includes English which acts as a bridge between the 500+ languages spoken in our country; thereby making us #OneNigeria [8]. @TheAcademy [9] https://t.co/LMfWDDNV3e [10]

The Academy created the basis for confusion when it changed the category of Best Foreign Language Film to Best International Feature Film. This “muddied the waters” by giving the false impression [12] that “language is no longer a factor in determining eligibility for the category,” according to the Wrap.

Nonetheless, the rules have not changed, and the emphasis on foreign language remains.

The Best International Feature Film award is granted to a movie produced outside the US with a predominantly non-English dialogue track, [13] a rule that the Oscars selection committee in Nigeria has admitted [14] it did not stick to when they submitted the award entry.

The resultant disqualification of the movie is a sad reflection of the ineptitude of Nollywood's (Nigeria's movie industry) “poor attention to detail.” “Lionheart” is a “right movie” that got nominated into “a wrong competition,” the BBC wrote [15].

Is Nigerian English a foreign language?

Nigerian linguist and poet, Kọ́lá Túbọ̀sún took the lead in the language conversation that followed the disqualification of “Lionheart.” Túbọ̀sún argues in African Arguments that Nigerian English “is a Nigerian language” entirely different from British and American variants [16]:

Its phonology (we stress the third syllable [ad-mi-RAL-ty] rather than the first [AD-mi-ral-ty], for instance), syntax (we say ‘let me be going’ for ‘I have to leave now'; ‘senior brother’ rather than ‘elder brother'; and ‘next tomorrow’ rather than ‘day after tomorrow’, etc.), and lexicon (words like ‘trafficate’ and ‘overfloat’, all distinctly Nigerian) already qualify it as almost a different language. Why else, for instance, would foreigners say ‘pardon?’, ‘scuse me?’ and ‘say it again’ so many times when speaking to us?

Túbọ̀sún points out the irony that Nigerians wishing to enroll in US universities have to take TOEFL (Test of English as a Foreign Language), a test that measures English language proficiency “of non-native speakers. [17]” This is paradoxical because as a former British colony, Nigeria's official language is English.

Túbọ̀sún insists that although Nigerian linguists have failed to “codify and officially recognize” Nigerian English, the artistic brilliance of Nollywood has taken that lead.

Cultural scholar Kovie Biakolo further extended the conversation. Biakolo noted that Nollywood cannot afford to only make movies in Nigerian native languages — for the simple, obvious reason: language diversity. With over 500 languages, English is an official bridge [18] connecting Nigerians residing within and outside the country:

In fact, contrary to popular belief, most Nigerian films are made with dialogues in one of the country's native tongues. While I couldn't obtain more recent statistics from the Nigerian National Film and Video Censors Board, according to 2011 data, 75 percent of all Nigerian productions [19] are made in Nigerian languages. But the reasons English is used in Nigerian films (that are expected to be popular beyond its borders) are historical and practical: Nigeria was colonized by the British, and English is the country's official language. Moreover, in a nation-state with hundreds of languages, the obvious rationale is that English will most likely reach the widest national audience and ensure a potential built-in, English-speaking audience abroad.

Our ideas of beauty, of race, of civilization and so on are based on the narratives that were told of us by those with the power to shape and share those narratives, and they in turn have become the narratives that we tell ourselves of ourselves. Why would an Igbo child tell another that eating akpu [a popular food [21] eaten in southeast Nigeria] is bush? Or that eating with your fingers is bush? Or that speaking Igbo is bush? Why would an Igbo man come on Twitter — as someone did recently — and say what a pity it is that one of our Igbo leaders has an Igbo accent. It is because over the years, we have allowed — not always willingly, I must add — we have allowed others to calibrate what is ‘bush’ and what is not, what is desirable and what is not.

One has to thank the Oscars for this disqualification as it has ignited a conversation that goes beyond “Lionheart” on the value of language and taking charge of Nigerian narratives — in all its languages.

There have been no formal efforts to designate Nigerian English as its own language category. Nonetheless, this cultural debate on style and linguistic aesthetics of Nigerian languages are long overdue.

In the end, “Lionheart” goes beyond the Oscars because it has forced the global gaze on the inequality that certain languages connote within a multilingual world and the attendant dynamics of power. This is the reason why creative works like “Lionheart” exist — employing artistic elegance to ignite difficult conversations.